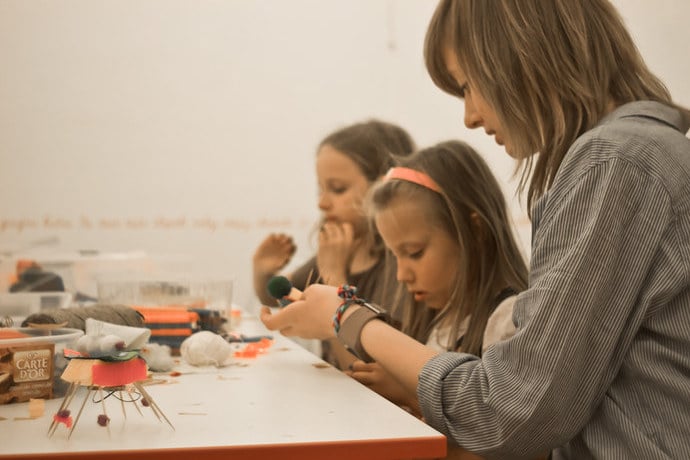 Computer scientists like to study kinds of computers. That’s not surprising, it’s in the name. But what might be a little surprising is that “computer” doesn’t only mean an object like a desktop or smartphone! No, the kinds of “computers” that computer scientists study include a bunch of different theoretical machines that are simulated with just a pen and paper, each with different abilities and restrictions on what it can do. These range from the mighty Turing machine, a nearly century old pen & paper “computer” that has infinite memory, to the tiniest, smolest, machine called a finite automata. The finite automata happen to be the subject of our article.

Finite automata are so simple, actually, that we can build and simulate one with just a few circles and lines drawn on paper. All a finite automata is capable of is processing a series of inputs one after the other and then responding “yes” or “no”. Here’s our first example, which is a finite automata that answers the question “is this binary number even?”

I’ve already implied that you can “run” this machine with a pen & paper, so let’s describe how! We start at the circle on the left with the arrow pointing into it and then feed the machine one input at a time. In this case, those inputs are digits of the binary number. For each input, follow the arrows between the different circles, or states. If, after we’ve eaten all the digits of the number, we’re in a double circle then the answer is “yes” but if we’re in only a single circle the answer is “no”.

Let’s try an example! Run the automata on the input “1010”, which is 10 in decimal. If you need a refresher on binary, check the further reading links!

Okay, but what else are finite automata good for? They’re used under the hood of a lot of software as very efficient ways to calculate the answers to all sorts of questions like “Does this email address end with either ‘.com’ or ‘.org’?” which is solved by the following automata. Note the use of the “*” symbol as a shorthand for “any character” rather than drawing a separate loop for every letter, number, and symbol.

Or this one that tests a solution to a Legend of Zelda style maze where you have to move through a specific set of exits or get sent backwards:

These automata are all just pen & paper simulations of machines but you can implement them inside any programming language. They’re used all the time for efficiently executing regular expressions, which are a popular tool for searching & matching text.

Computer scientists have another interest in finite automata, though, because we like to know how much power different models of computation have. This means we don’t just want to know what it can do but what it can’t do.

So that’s our introduction to finite automata, the simplest kind of computing machine we can define. They’re shockingly powerful for how simple they are and even more shockingly close to being real computers.

Try writing some and seeing what you can do!

Spoilers for the kind of automata that can detect palindromes