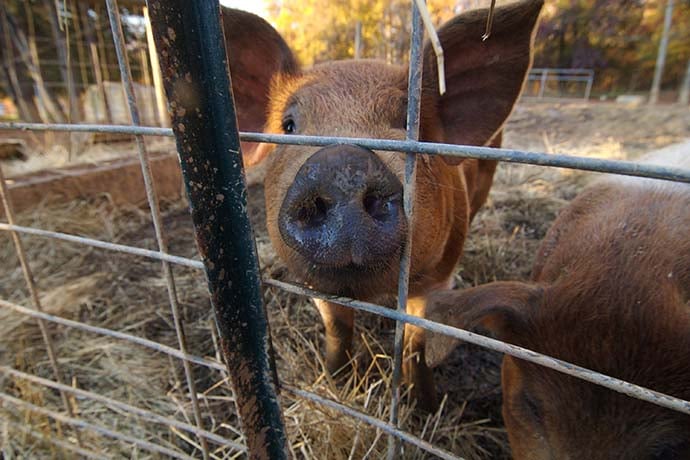 Last issue, we explored the simple substitution cipher to create a basic yet efficient code to use with your friends and family. This week, we’ll explore something a little more fun; using the Pigpen Cipher which uses alien-like symbols to share messages with people in the know. What looks like meaningless and bizarre shapes is actually a secret code transmitting sensitive information!

The Pigpen Cipher has a strange name, but there’s a reason behind it; the idea is that you assign each letter of the alphabet to a specific shaped bracket, or ‘pigpen’. When you go to write your secret message, instead of writing normal letters, you instead write the bracket that each letter ‘lives’ in. Everyone else sees strange bracket symbols, but those with the cipher’s key can translate the brackets back into letters and solve your secret message!

So, let’s get to making a pigpen cipher. First, draw out 26 different ‘pigpens’ for your code to use, and assign a letter to each one. Make sure each pigpen looks different to the other pens. To make things easier, you can repeat the basic shape of a pen but add a symbol or a marker to differentiate it from the others. Here’s an example of a basic pigpen cipher:

Remember you don’t have to follow the above example if you don’t want to! If you can think of more interesting shapes to use, feel free to invent your own. Just remember to ensure no two pens look identical, or decoding messages will be very difficult.

Now that we have our cipher, it’s time to make a coded message. First, work out what you want your message to say. For this example, let’s keep it simple and say we want to transmit the word “ANT”. What we do is locate each letter and note the shape of the ‘pigpen’ that’s around it. For instance, A is inside a backwards L, N is inside a box with a dot near the bottom, and T is in a V turned on its side.

Once you’ve found what pen the letter is, you write your message down by drawing the shape of each pigpen, rather than the letter itself. If you’re using dots like I am, make sure that you don’t forget to add them into your code, or else things get very confusing! To spell ANT, we’ll write the word like this:

When someone with the code’s key receives your encoded message, all they have to do is look for the pigpens in the cipher and note the letter that’s within it. They’ll see the backwards L and write A, then the box with a dot for the N, and a sideways V for the T. Success — our message was delivered!

In a way, this code is about making an alternate alphabet and making messages by translating English words through it. As such, it makes it quite easy to crack, but has the added benefit of not looking like regular letters at all. This means you can hide them away from prying eyes and nobody will suspect you’re sending messages. Disguise them as a decorative pattern, hide them in images, make them look like random scribbles; the possibilities are endless!

Now it’s your turn. Let’s pretend we’re going to talk to a friend about meeting up later, and we both have the cipher key to encrypt and decrypt messages. Using the cipher we defined above, how would you write the following sentence?

WHEN SHALL WE MEET

Once you sent your message off, your friend replies with the following message. What are they trying to say?

The Elian Script – An artistic code derived from the pigpen cipher