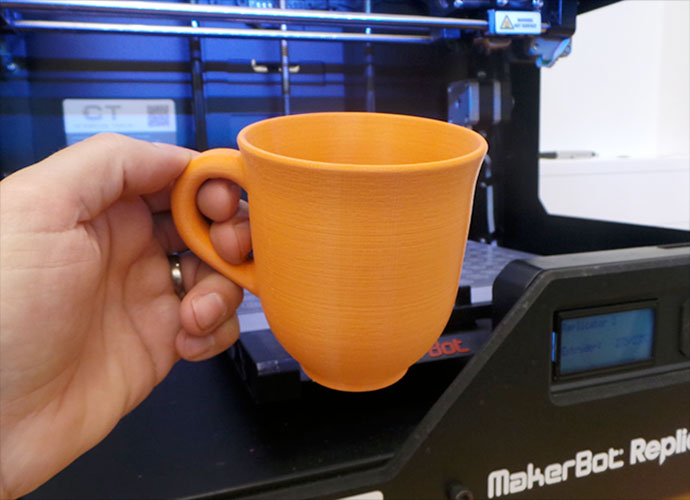 This article provides a high level overview of 3D printing. While the technology has been around for twenty five years or so, it was used primarily by engineers to create prototypes. More recently, 3D printing technology has become available to more people at a lower cost to create objects on demand locally.

A Basic Definition of 3D Printing

We all know what printing is so let’s begin with the 3D part of 3D printing. 3D is shorthand for three-dimensional. When you print a page on a printer, there are only two dimensions: the front of the page and the back of the page. Three-dimensional printing adds a third dimension, volume.

3D printing uses a printer to create three-dimensional objects, for example, a cup or Yoda doll or phone case.

3D printing has these qualities:

How 3D Printing is Used

Today 3D printing is mostly done by business, students, and designers. Home or consumer use of 3D printing is mostly limited to people trying out the technology. However, there’s a lot of value in printing three-dimensional objects for students, designers, and anyone who needs a small object to demonstrate their ideas or create usable objects. Students as young as 10 years old also might use a 3D printer in shop class.

It’s the future uses of this technology which have people excited. For example, replacing the plastic back of your TV remote might involve going to a website, finding the part, then clicking a button to have the part printed locally where you can pick it up. Today you either replace the complete remote control or figure out where to get the replacement part which has been created elsewhere, likely overseas.

More interesting, 3D printing makes it possible to experiment with fashion and other parts of our lives we take for granted. It might be possible to create medical implants, for example, using tissue from the patient.

Perhaps the most talked about, and misunderstood, use of 3D printing involves making guns. While it is possible, there are many factors that make printing a gun dangerous and uncommon. It’s easier and safer to create a light saber.

It’s also possible 3D printing will be used as part of a larger manufacturing process, for example, to create cars. In addition to a new set of cars offered every year by automakers, 3D printing might make it easy to buy a 1967 Mustang with the latest engine, safety, and other technologies from your local car dealer.

The same dynamic applies to shoes and frames for glasses, for example, where older designs unavailable today might be available for 3D printing at home or nearby at a print shop.

In addition, there is at least one group that provides students a way to use their school 3D printers to create prosthetic parts for medical use. Students get hands on experience creating something other than a phone case while helping others.

At a high level, a 3D printer takes material, usually plastic wrapped on a spool, heats the material, and then fuses the material layer by layer to build a three-dimensional object. The material is extruded, or pushed out and deposited.

Precision is critical for 3D printers. The print head, pulleys, and extruder hardware must be aligned, as well as software dimensions translated to the correct real world dimensions used by the printer hardware.

The Printrbot printer is a low end printer you can build yourself to understand how all the pieces of a 3D printer fit together and work. Most people, however, use a pre-built printer where they adjust the location of the print head and build platform, as well as test the extruder heads emit the material used to print.

There are at least two kinds of additive 3D printing, resin and non-resin. Printing objects with resin uses laser technology to solidify layer by layer to create objects. It often is extremely costly and uses light and chemicals to cure the object. However, the results are more precise than non-resin printing.

When people talk about 3D printing, they’re mostly talking about non-resin printing. Instead of resin, lasers, and chemicals, non-resin printing uses plastic, food, ceramics, or other material and adds layer upon layer to create an object.

Printing a three-dimensional model is more complicated than opening up Microsoft Word and printing to your 2D printer. At a high level, to create a 3D model you follow these steps:

Non-resin 3D printers use mostly ABS and/or PLA plastic which becomes pliable when heated then solid. There are other possible thermoplastics used. Some printers use metal wire. And newer printers can print ceramics or with food materials. Materials are fed into the printer with a spool that has plastic or other material wound around the spool.

Resin 3D printers use custom formulated plastic resin poured into a tank. The resin is light sensitive and hardens when laser light heats a spot within the resin.

These are key terms you will encounter with 3D printing:

ABS — Acrylonitrile butadiene styrene (ABS) is one type of thermoplastic used in 3D printing. It becomes soft and pliable when heated. See PLA.

Additive — In 3D printing, the process of building an object by adding layer upon layer.

Build Platform — In non-resin 3D printing, the flat level surface used as a base to create a three-dimensional object. Resin 3D printing uses a tank filled with resin instead of a build platform.

Build Volume — The maximum length, depth, and height a 3D printer can use to build an object. Also called Print Volume.

Extruder — A nozzle that takes thermoplastic wire or other material and deposits the material at a precise location with the print head.

FDM — Fused deposition modeling (FDM) is a process to use a fused material to deposit layer upon layer and create a three-dimensional object. FDM is trademarked. An alternative un-trademarked term is Fused Filament Fabrication (FFF).

Gantry — Larger non-desktop 3D printers use a steel frame made of connected beams to suspend the print head and other parts of the printer as objects are created.

Gcode — a programming language used by machine tools, including 3D printers. A 3D model must be saved as an STL file format before it can be converted to Gcode for printing.

NURB — Non-Rational Uniform Splines (NURBs) are a type of shape where the edges of the shape are splines (curves) controlled and adjusted by handles visible onscreen. You drag a handle to change the length and position of the curved spline edge.

OBJ — The OBJ file format is a common 3D model format used by modeling software. For 3D printing, OBJ files must be converted to STL file format then Gcode for printing.

PLA — Polylactic acid (PLA) is a thermoplastic used in 3D printing as an alternative to ABS. Because it is made from sugars, PLA when heated can give off a sweet smell. See ABS.

Polygon Modeling Software — Polygon modeling software creates models by connecting and combining polygon shapes at their edges. Polygon models rarely, if ever, use NURBs for curved edges. Instead, polygons are subdivided into new polygons to create the appearance of smooth round edges. Computer-aided design (CAD) and sculpture modeling software also are used to create 3D models for printing.

Slicing — The process of converting (slicing) a 3D model computer file into layers and then translate each layer into machine code used by the 3D printer to build the three-dimensional object.

Stereolithography — An additive 3D printing process building layer upon layer by curing a resin with a laser.

STL — The STL (stereolithography) file format describes a 3D model as a set of triangles. STL files are converted to GCode which 3D printers use to print objects. Most 3D modeling software lets you save or export files in STL format. Otherwise, files are saved in OBJ (object) format and netfabb software is used to create the STL file from the OBJ format.

subD — A subdivision (subD) surface is used in polygon modeling software to provide rounded edges to otherwise square surfaces, for example, a cube with rounded edges. The subD surface allows a specified set of edges to be subdivided into additional polygons to provide the rounded edge.

Subtractive — Creating an object by removing (subtracting) parts of a single block of material.

Thermoplastic — Plastic that becomes pliable upon heating then solid when cooled.

Triangle Geometry — The STL (stereolithography) file format describes 3D models as a set of triangles. Models also can be describe with polygons or quad geometry.

Watertight — A 3D object model is watertight when the printer can tell the inside from the outside of the model. If you filled up the model with water, no water would drain out.

3D Printing Doesn’t Live Up To The Hype Yet

The Sweet, Creamy Goodness of 3D Chocolate Printing From Hershey and 3D Systems

8 Tips for 3D Printing with Sketchup

Includes a definition of “watertight” and solutions. Applies to any 3D software used to create models.
http://www.mastersketchup.com/8-tips-for-3d-printing-with-sketchup/

Also In The February 2015 Issue

Why are there so many gnomes available for 3D printing?

From simple to complex, nine three-dimensional models you can download then print to explore 3D printing.

An American living in the United Kingdom, Jill Hodges talks about how she started a summer technology camp for kids.

When you create a three-dimensional model for printing, it's important to know what prints well and what does not.

One book teaches JavaScript in a fun way, the other computer science as fable.

It's possible to print your 3D project the same way you print a flyer at the UPS store. Here are several options.

3D printers may be new technology but there are several printers individuals, schools, and businesses might buy.

Links from the bottom of all the February 2015 articles, collected in one place for you to print, share, or bookmark.

Interesting stories about computer science, software programming, and technology for December 2014 and January 2015.

While many people are familiar with floating point numbers in school math problems, they're very useful in computing.