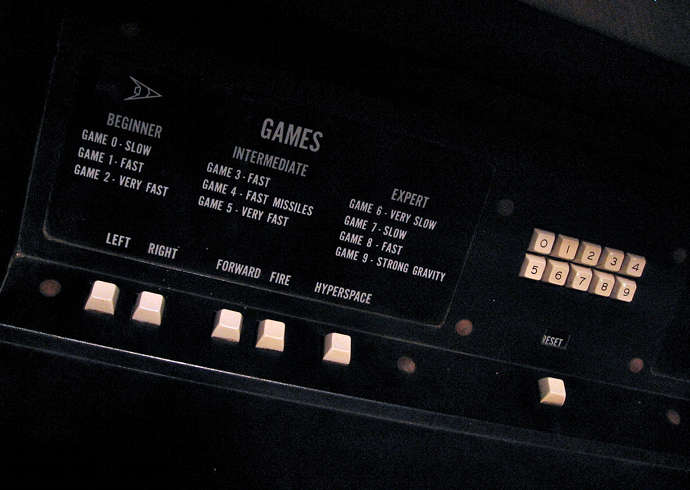 Probably the most interesting part of video game history is the role of play and fun in computer science history. For example, Claude Shannon and others built simple electro-mechanical mice with mazes and mechanical Turks to explore ideas about artificial intelligence. While video games we know were not available to the public until the 1970s, games have been a big part of serious scientific research into military strategy, human-computer interaction, and adaptive learning.

Another interesting aspect is how little early researchers cared to save their work once their work was done. Many early games from computer science research and university computer labs were saved by accident or destroyed.

What Was the First Computer Video Game?

The answer depends on whether you mean games available to the public, in bars as an arcade game, or limited to university computer labs.

Video games are, by definition, a combination of software, electronics, control devices, and a computer screen. The Magnavox Odyssey is the first game to meet this definition for public sale. The first video game available to anyone with access to a university computer lab was Spacewars! in 1962. The first game available to the public through bars as a coin-operated arcade game was Computer Space, released in 1971, a knock-off of Space Wars!.

Of these three games, only Space Wars! proved successful, encouraging other computer science students to create games with scarce computer time, and inspiring the Magnavox Odyssey and Computer Space games. DEC included the Space Wars! game in every computer it sold to universities for years after 1962.

How Have Video Games Evolved?

The first video games grew out of computer science research, bored but inspired students operating university computers late at night, and business people like Nolan Bushnell, Ted Dabney, and Ralph Baer who saw the potential of games played on computer monitors. One effort to create video games also grew out of a desire to make early television interactive with viewers. In some cases, these sources mixed. Pong, for example, was first built and made available to the public at Brookhaven National Laboratory in 1958, as Tennis for Two, to amuse guests at their annual Visitor Day, but not formally copied and sold to the public until 1972 by Atari, and then only as an arcade game.

Video game history also depended on the evolution of hardware, software, and programming languages. The Magnavox Odyssey included not only a primitive console but also included four games in the box, four games sold with a light gun, and six more games sold separately. Bushnell and Nolan, after the failure of the Computer Space game, created Atari and released Pong as their next coin-operated arcade game in 1972.

These early games led to an explosion of games, consoles, and companies in the 1970s. However, the game industry suffered a series of boom and bust cycles. In the 1970s, too many different and incompatible types of consoles were sold. In the 1980s, poor software left the market flooded with software few would play. In the 1970s and 1980s, the most popular platform were arcade games. Games played on televisions and early computers were not as popular. Retailers in the 1980s and 1990s also viewed video games as mostly a fad compared to home computers. The way games were sold also limited sales to the public.

Aside from all the obvious types of video games — action-adventure, role-playing, military, mazes, racing, and so on — some video games borrowed from movies to create immersive experiences. The Portopia Serial Murder Case, released in 1983, was the first Japanese adventure game that played like reading a novel or comic book. Ten years later, Myst combined the visual and sound qualities of film with a puzzle and adventure game. Players had to find then read clues by clicking objects in Myst as they wandered around its mysterious world.

Another innovation in video game history are narrative games. In the 1990s, Sims games became popular with people who had patience to create an artificial world. And games like Harvest Moon, Skyrim, and others let players follow story lines they controlled through choices they made as they played the game. Fans of these games buy versions over decades, the way people buy books by a favorite author as they are published.

The near future of video game history likely will revolve around equipment that creates interactive and immersive experiences, although both have existed for some time in arcade games. The Wii was one of the first to allow players to have their hand and body motions impact game play, for example, and dance arcade games let players use their feet to match the game play.

The Art of Video Games (Smithsonian)