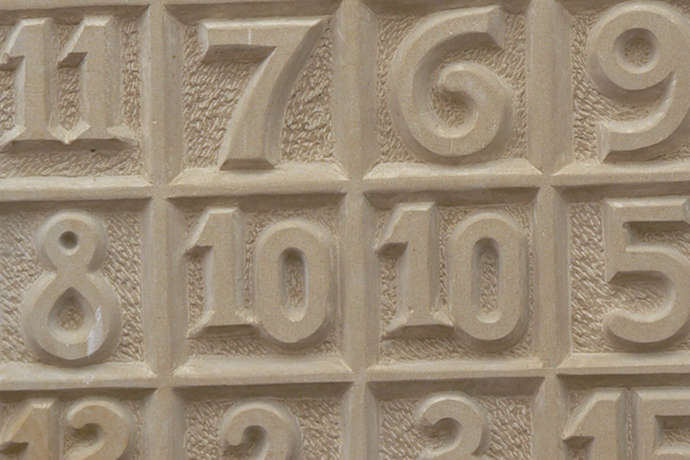 Magic squares are a simple math puzzle with a grid of equal numbers of columns and rows. Each cell in the grid is assigned a number. The columns, rows, and diagonal directions total to the same amount. For older kids and adults, this amount is called a magic constant.

Legend says an ancient Chinese emperor name Yu happened to be down by the Yellow River one evening when he noticed a turtle swim at his feet. The turtle had unusual marks on his shell which formed a magic square where all columns, rows, and diagonals summed to the same amount. Here’s the pattern of dots Yu saw on the turtle’s shell:

The 3 cell by 3 cell square grid pattern is called a Lo Shu magic square after a Chinese story about a turtle star pattern and the Lo river.

To solve a math squares puzzle, the sum of all rows, columns, and diagonals must be the same. You can only use each number once. Here’s a blank 3 cell by 3 cell grid you can print out to try and solve:

Can you solve the puzzle with these basic rules? How long does it take you?

How to Solve a Math Squares Puzzle

The easiest solution is in the pattern of dots Emperor Yu saw on the back of the turtle. In the pattern, notice how each row, column, and diagonals of dots sum to 15:

Of course, this is cheating to simply refer to the dot pattern. It’s more fun to see if there is a mathematical way to solve any math squares puzzle.

As it turns out, there is a way to calculate the sum you need to find for each row, column, and diagonal in your grid. Add all your available numbers and divide by the number of rows in your grid:

A three cell square grid, therefore, must sum to 15 for all its rows, columns, and diagonals. The dot pattern Yu saw on the turtle’s back sum to 15.

How you sum to 15 turns out to be somewhat flexible. Here are eight solutions:

Note Yu’s dot pattern is the upper left solution. The other seven solutions, however, also sum to 15 for their rows, columns, and diagonals.

If you’re ambitious, or nuts, you may wonder if this mathematical pattern holds for larger square grids. It does. While legend says Emperor Yu of China discovered magic squares, they appear in many cultures through history. The question of how to expand magic square grids from 3 cells by 3 cells was solved by Thakkura Pheru in India in 1315 AD. You can find his solution and other ways to do and teach magic squares in the links below.

Some skeptical background for the Emperor Yu legend with alternate origins.
http://books.google.com/books?id=UqugpLLyZUEC&pg=PA20&lpg=PA20&dq=emperor+yu,+mystic+symbol,+turtle,+magic+squares&source=bl&ots=NGVwCmLQtS&sig=zsTWHb_9NyT5GdRo8NXLf21nozM&hl=en&sa=X&ei=itMmVPiKIcWZsQSijIHYDw&ved=0CB0Q6AEwADgK#v=onepage&q=emperor%20yu%2C%20mystic%20symbol%2C%20turtle%2C%20magic%20squares&f=false