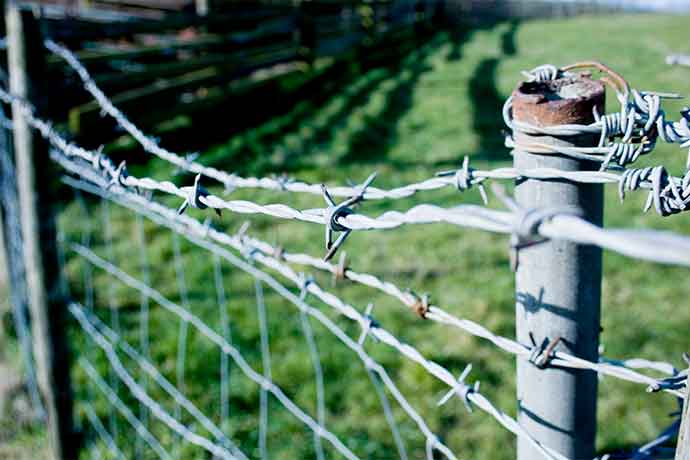 Barbed wire and software has led to endless lawsuits, knockoffs, and innovations. Not much changes, does it?

Recently, I had half an hour to kill so I watched part of an episode of American Pickers, a US show about two guys who travel the United States in search of antiques and junk they resell to collectors. They found an obscure museum where the owner wanted to shut down rather than pay his town $750 for a museum license. But what intrigued me was his collection of barbed wire.

You might think barbed wire is extremely boring and has no connection or parallels with computer science or programming. It’s wire twisted and sharpened and strung between fence posts, end of story.

Which got me thinking, since this Off Beat article is about using for fun the research skills I use to create this magazine, exactly how do you patent barbed wire? Are there really that many differences, one much better than another? And did people sue each other to defend patents?

So let’s take a detour and explore barbed wire, patents, and an obscure corner of technology history.

Without sounding like your grandfather or grandmother, or someone really really old, the US economy used to be spread out. Today you can buy the same model of computer at Best Buy in New York or California. This is a new phenomenon, not an experience most people had even fifty years ago. Many people kept chickens in urban cities. Some also had gardens to provide much of their what they ate. Read Jane Austen or Mark Twain, for example, and you won’t find characters shopping for food at Trader Joe’s or Safeway. People who bought from markets used the local store in their town, what we might call a convenience store, which stocked food, guns, clothing, toys, and other stuff.

What’s this got to do with barbed wire?

As people settled down in the US (to the detriment of Native Americans, I should note), they wanted fences to mark off their farms and properties. On the East Coast of the US, people used stones to mark off property limits. Elsewhere people built wood fences. Barbed wire solved the problem of trespassers on the flat prairies in the vast plains in the middle of the US. Barbed wire kept your livestock at home.

However, fenced plots on the plains made it more difficult, or impossible, for cows to be herded from Texas up north to Chicago over your land. Ranchers driving large herds to slaughterhouses conflicted with the needs of farmers. And Native Americans who could care less about fences.

Today a big hairy software programming problem might be how to capture, store, and retrieve activity data for millions of users spread across countries and continents. With barbed wire, a big hairy problem was truly big and hairy: a bull or cow that refused to let barbed wire stop them from wandering free.

The History of Barbed Wire

Now that you (hopefully) agree barbed wire is a technology designed to solve a problem — how to keep Bessie on or off your land, let’s research the history of barbed wire.

The first search result for the history of barbed wire turns up one notable fact: the person who invented barbed wire was not the first to make money on it. Or the first to hold a patent. The idea was stolen, in other words.

Henry M. Rose, a farmer, displayed a wooden rail with sharp wire points to be attached to a fence rail at the DeKalb County Fair in 1873. Today you attend technology conferences to learn how to become a better software programmer. In 1873, you attended the county fair to learn about the latest products and meet people who could help you be a better farmer.

Three men examined Rose’s invention and turned it into a product. Instead of a wooden rail, the sharp points were attached to a single wire currently used.

The three men were Jacob Haish, Joseph Glidden, and Isaac Ellwood. Inspired by Rose’s design, Glidden and Ellwood independently created their own wire designs. When Ellwood saw Glidden’s version of barbed wire, he recognized Glidden had the better solution. They went into business together to patent and market barbed wire. Meanwhile, Jacob Haish then saw Glidden’s version of barbed wire, got jealous, tweaked his design then filed for a patent. Then he submitted interference papers to stop Glidden and Ellwood from filing patents for their wire design.

Can you say, barbed wire troll? Sounds like patent troll. It’s also interesting the question of which works better — open source or proprietary ownership of key technology ideas ‐ immediately sprang up with barbed wire. Proprietary ownership resulted in a ton of lawsuits and employed lots of lawyers over decades, a lot of wasted unproductive activity.

Anyway, back to the story. Haish versus Glidden and Ellwood led to both creating companies to produce and sell barbed wire. An East Coast producer of single wire fencing, the Washburn and Moen Company of Massachusetts, approached Haish to partner and let them sell this new type of wire. Haish rejected them. Glidden and Ellwood made deals. Glidden took a royalty payment. Ellwood merged his work with Washburn Moen. They soon bought up many of the first barbed wire patents to strengthen their position. It began decades of competition. And lawsuits.

One of the interesting bits about the history of barbed wire apparently is that no factual history exists. Examples of barbed wire existed before Rose’s fence rail with sharp wires appeared. However, none were produced and sold in large quantities. And what histories exist come from the lawsuits traded between Haish and Ellwood.

It was Jacob Haish who used patents to try and beat Glidden and Ellwood to market. From there, the game was on.

So how many ways can you design barbed wire?

A website called InsaneTwist.com says 800 with about 2,000 variations. A US National Park Service site says over 500 patents. Ellwood’s company quickly grew to dominate the market for barbed wire. Which led to about 150 smaller producers with competing patents and designs to file lawsuits against his company for monopolizing the market. These small fry wire producers were called moonshiners.

What is Barbed Wire?

The InsaneTwist.com site mentions in passing much barbed wire actually were not wire. They were cut steel patterns with sharpened edges attached to wire.

The primary benefit of barbed wire for fences is its simplicity. You only need the wire, fence posts, and staples to attach wire to the posts. Sounds like building a simple do-it-yourself website with Wix.com, WordPress.com, Blogger.com, or similar.

The Development and Rise of Barbed Wire

The Early Years: A Brief History of Barbed Wire