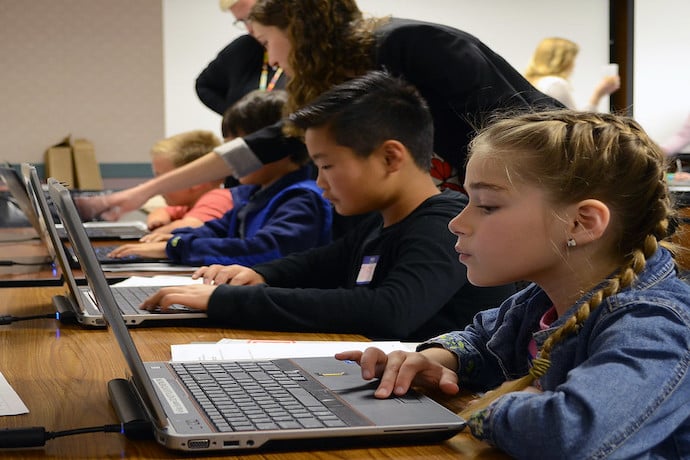 I never realized how much work this involved until my dad was the school lead and had to schedule the mock tournaments.

There are some rules to pairing up players. Two students cannot be paired up more than once during competition. After every round, we check that the same students aren’t paired up together again. This sounds easy but it’s a tiring job. My dad worked long hours and stayed up late making schedules for the Math Pentathlon meetings.

One day, I saw him working on this pairing problem and thought, if a human can do this scheduling in 4 hours, can’t a computer do it in less time? So I started programming a website and, two years later, my website can schedule a mock tournament in 5 minutes. I hope this program will help many school Math Pentathlon leads.

Math pentathlon is a group of math and logical thinking related games. Students are grouped into divisions based on their grades. A division is made up of two grades. Each division has a set of five different games.

The games are practiced as a team or individually. At the end of the Math Pentathlon season, there is a final tournament. At the tournament, each kid plays each game with different people they have never met. They have a monitor who watches the games and clarifies rules. Kids gain points depending on their wins or losses.

At the end of the competition, all the points are added up and medals are awarded, depending on how many points each kid has collected.

The Round Robin Algorithm

For the first round, students are paired from across the polygon and the center student is paired with the highest point. So this pairs

This continues rotating for a total of 5 different rounds. At the end, the schedule would look like this.

The same pairs will not repeat unless there are less than 6 students. With 6 students, there are 5 possible different pairs, but with anything less you can not make 5 different pairs. For example, with 4 students, the pairs are (1, 2) (1, 3) and (1, 4) which is only 3 pairs, whereas 5 pairs for 5 rounds are needed. So in this case, pairs must repeat.

Before I started to code, here’s the round robin algorithm results for five rounds.

To create a website that pairs students without repeats, I had to create this round robin process in code. It required a number of steps to code the round robin algorithm. Because I created a website, I used the PHP programming language.

Third, I needed to know the names of the monitors. The monitors are parents who volunteer to supervise the games. These names are stored in an array called monitorNames. There is no specified number here because monitors do not change their order. They are assigned to a station and stay there the whole tournament.I also have to check if there are enough monitors. In the game, there needs to be one monitor for every two students. Monitors to students ratio should be 2:1. If there are not enough monitors for the number of students, I add a monitor called Extra Monitor. In the tournament, a parent who originally didn’t volunteer to be a monitor would supervise the game as the extra monitor.

Next, for the second round, I rotated the polygon and changed the order of the students. This new order for round 2 in an array called studentNames2.

Then again, I pair the students up and re-order the students for the next round. And I repeat these steps until all 5 rounds are done and students paired up without repetition.

Here’s my final code, as described above:

What I Learned About Programming

I want to share what I have learnt through the process of turning the round robin algorithm into software others can use to schedule Math Pentathlon students.

Code is hard, but if you want to create a program using code, you have to just push through whatever problems are frustrating.

Code is almost completely trial and error. During the project, I tried a piece of code out, and I had to go back and fix something, then checked it again and fixed something again and checked it again and again until I finally reached the right code. I wanted to give up, but I didn’t and I learned that I have to just keep persevering until I reach my goal and feel a sense of accomplishment.

This program included a lot of algorithms. To create these algorithms, I had to write out the start, which is the information I had, and the wanted end result. Then, find a pattern of how the start leads to the end. Then lastly, put it into code. After that, I ran through the code manually and fixed any small issues in my algorithm and after that, it worked by itself. This is a lot of work because the round robin algorithm is very tricky and there are a lot of steps to it. But after I put some effort in the beginning, I didn’t have to worry about it later.

You may lose interest along the way

At one point, It was getting challenging, it wasn’t working and I just felt like giving up. So I stopped. I came back to the code after a few months and I had new ideas and clearer thoughts. I used those ideas to move forward. I also learned that a few months of break is too long because you forget a few things while you are away from the code. So I had to go back and revisit the old code and understand what it is doing again and then write more code.

You can’t do it by yourself

There were many times during this project where I didn’t know how to solve the issue. I got help from 2 mentors. They would help me understand the problem, and teach me a line of code that could help me solve the issue, after that I could debug by myself. To make sure that I covered everything that the program needs to be able to do, I incorporated suggestions from the people who are going to use the program. With the help of others, I was able to complete the program to help everyone.

Failure is essential to success

I made many mistakes during this project. Some were small coding mistakes, and some were bigger algorithm mistakes. When I took a break and went back to the code a few months later, I looked at my round robin algorithm and noticed that you can’t schedule that way properly without at least 10 students. So I restarted on all my algorithms and made new ones. Now using these new algorithms my program can schedule with only 6 students. Like this, with many other problems, I just figured out what I did wrong, and I fixed it. Even if I only fixed one problem a day, it was still progress.

You have to learn something along the way

If I knew how to code the whole thing, I wasn’t learning anything and part of the coding experience is learning! I had to stop along the way and complete two Udemy courses. I learned a lot from those courses. I didn’t incorporate all the code I learned, but lots of it I did. Those little bits of code made the program a lot better. I also used Stack Overflow and W3Schools to learn and sometimes I clarified a line or two of code with it.

Having fun is crucial

This took a long time and I had to present it to some people who will help me spread the word about this project. I had to present to them by some date, so sometimes I was stressed to finish before the deadline, but I just relaxed, and had fun while coding! Sometimes the code doesn’t work and it looks like I’m doing everything right so I get frustrated. Sometimes the code works perfectly on my first try so I am happy and enjoy it. But, the code doesn’t always work perfectly, so I just have to push through the times it doesn’t. I had to enjoy it or I would get stressed and frustrated and I would want to quit. It may be about the end result, but it’s also about the climb!

It was a challenging process, and I wasn’t sure if I would finish. I worked very hard for 2 years and wrote a lot of code. And now that I see the end result, I feel good that I completed a project to make people’s lives easier. Hopefully, my experience helps you in your coding journey. Good luck!

Facts about Round Robin

Why kids should learn to code