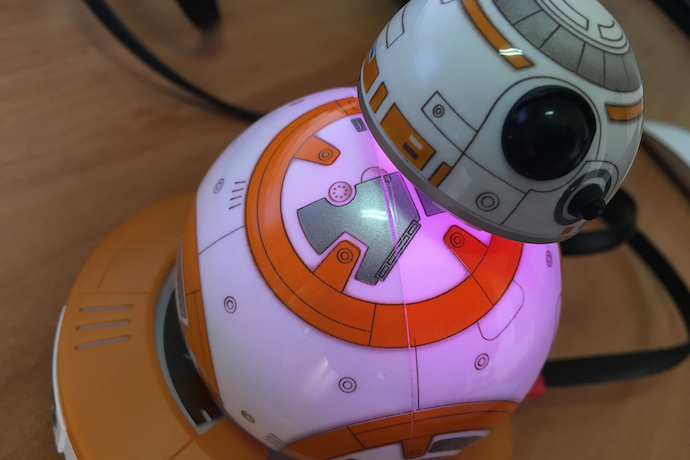 Say hello to your new favourite robot: spherical, programmable, and durable. It can even swim!

Robots come in all shape and sizes. Some have legs, others wheels, and yet others are stationary. But have you ever seen a spherical robot? In other words a ball that rolls on command? Sphero is precisely that.

Why a Robotic Ball?

The idea of a robotic ball is fun. Most of us have seen cars controlled by remotes, and even drones being tested out at parks and other public spaces. In comparison, a ball seems mundane. But perhaps because of the familiarity of its shape, Sphero’s ability of move on command makes it as least as much of a novelty.

Imagine climbing atop a play structure at the local park with a mobile phone hidden in your hand and Sphero on the ground below. A young child comes up to investigate in mysterious ball, and you push “Start”. To the child’s surprise, the ball rolls off, as if deciding on its own to make a run for it!

Even better than Sphero’s ability to roll off with the press of a button it its ability to be programmed. The makers of Sphero created a coding environment called Lightning Labs, in which blocks of code can be clicked together (or JavaScript can be written) to change the way the ball rolls. If you want Sphero to roll off in a straight line for 10 seconds, shining a purple light as it goes, you can write a simple program such as that shown below:

With a tap on the screen, you can see the same code written in JavaScript:

Or maybe you want sphero to roll off in a zigzag pattern. That can be done as well:

Again, with just one click, we can view and edit this code in JavaScript as well:

Sphero can accelerate as it goes, stop and start again, make a variety of fun noises, and even perform some fancy calculations.

The science of the spherical shape is something to consider. Because all of the electronics, including its power source, are permanently sealed in a sphere, it is recharged through electrical induction via usb. In the transparent SPRK+ ball, all of the electronic and mechanical parts can be seen, giving it a super technical appearance. And because of a trusty seal and a good deal of air inside the sphere, Sphero floats and swims unharmed in water. By writing a quick program with the power set high, Sphero can take a swim in a lake or pool, or even splash around safely at the beach (but watch out for tides that might sweep it away).

Sphero can be buried in wet sand, tossed into the pool, or rolled through the sand or snow just as well as it can roll across your living room floor. As such, it is one of the most outdoor friendly, household or classroom, robots available. A rough tumble onto a hard surface could crack the outer case, but otherwise Sphero is one tough robot that can be enjoyed as a toy just as well as a physical programming tool.

Wired article: “How BB-8 – a Rolling Robot in a Galaxy Far, Far Away – Changed Everything for Sphero