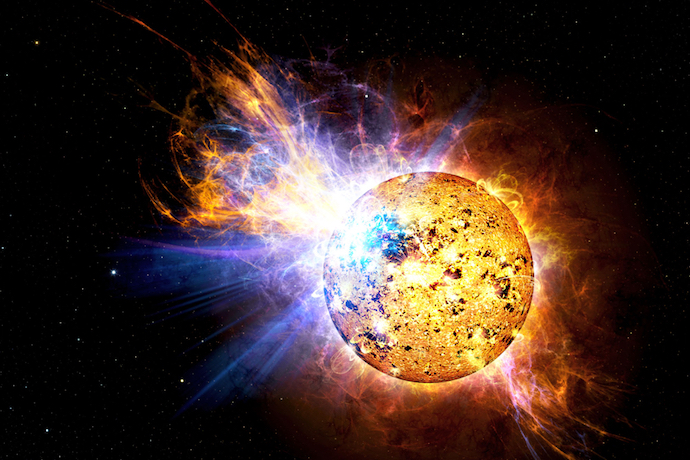 Okay, the sun isn’t really making any noise that we can hear. Sound cannot travel across space. But that humming is the satellites’ data translated into sound. So now, scientists studying the sun can just listen. What they hear is mostly static, or humming. But every now and then, something changes. And for sonification experts, like Robert Alexander, that change is music to their ears.

Sonification is the use of sound — or non-speech audio — to convey data.

No, it’s not a new science, it is just a different way of presenting science.

You already know about sonification. A heart monitor in a hospital keeps track of someone’s pulse. As long as doctors and nurses hear the ping, all is well. When it changes, they know something is wrong. Likewise, a Geiger counter clicks when it is near radiation.

Robert Alexander is one of a hundred or so experts in the field of sonification. “I turn data into sounds,” he explained.

While he was at the University of Michigan, he took the satellite data for the Sun and dumped that data into a computer program to make it audible.

“I was sitting in a coffee shop in Ann Arbor listening to this sonified data for the first time. I hit play and I heard an underlying hum, and there seemed to be a structure. The hum would rise and fall. It was amazing!” he said.

He went back and checked the numbers, and realized that the pattern matched the 27-days it takes for the sun to spin.

After finding this baseline, he listened harder. He found he could separate out the sound of individual gases and elements. He could hear the solar flares. Alexander, who is also a composer, worked with scientists who study the sun. The scientists wanted to have another way of studying their data, and they wanted to use sonification.

So Alexander’s goal was to make a kind of celestial soundtrack. What he ended up with was a discovery.

Alexander realized he heard the same sound just before each solar flare. He could identify that sound as the element carbon. However, none of the scientists who studied solar flares talked about carbon. They checked it out. And indeed, carbon is important. It is an excellent indicator of where the solar wind originates on the surface of the sun.

This was a fact no one knew before.

While this detail may not seem earth changing, remember many people had looked at the data before Alexander. To find something new is impressive.

And that is one of the goals of sonification: we hear data differently than we see it. Sometimes that means we learn new things. Alexander has found he often does.

Sonification also is helpful for people who are blind or visually impaired. And it can be useful in teaching for people who have different learning styles.

While sonification is very useful, it does require training. Since Alexander is a composer, working with sounds came naturally. But Alexander had to spend time learning what solar wind sounded like. Then once he understood what was normal, he could listen for changes.

“It’s about using your ear to pick out subtle differences,” he said.

Alexander’s broadcasts and his music

Motherboard article: “‘The Space Composer’ is Making Music with the Sun”

TEDx: “How we turn stars into music”

University of Michigan: Scientists Listen to the Sun