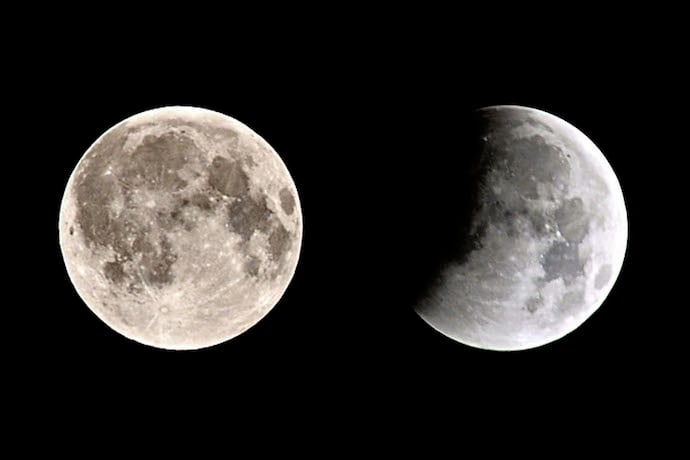 NASA has released a fun cut out project that helps figure out different phases of the moon for this new year. If you don’t know, 2018 will be an amazing year for the moon. You’ve heard of a blue moon, as in, once in a blue moon? There’s a once in 150 year blue blood super moon and eclipse on January 31st. A blue moon is not one but two full moons in a month. A blood moon happens when the earth is in the way of the sun and moon with light filtered through the earth’s atmosphere on to the moon, making the moon appear red. A super moon happens when the moon is closest to the earth and appears 30% larger.

There also will be a second blue moon in March 2018! February is a short month and the two full moons in January means March will have two. NASA’s moon phases calendar and calculator is a fun way to track the moon this year. So is their moon website and sky event calendar.

Paul Curzon at Teaching London Computing has a fun tutorial showing how to use Python to shape any poem with line breaks based on the Fibonacci number sequence. And if you have a favorite number sequence, the article shows how to write an application to apply your sequence to create line breaks for any poem using programming concepts like generalisation and currying.

The Fibonnacci number sequence is a set of numbers with each number created by adding the previous two numbers. This yields 1,1,2,3,5,8,13,21, and so on. This sequence appears often in nature, for example, the number of petals on flowers and bee breeding.

Two men in Hawaii who have been friends since sixth grade learned they actually are brothers with the same biological mother. Each friend independently took a recreational DNA test. They grew up together, played on the same high school football team, and have stayed close friends. One friend, Alan Robinson, was adopted by his family. The other friend, Walter Macfarlane, discovered the DNA match when tests listed his friend as having identical X chromosomes which are passed by mothers to their children. Further research showed they had the same mother, something they never knew or guessed.

How Firefox Got Fast Again

Web browsers are so common most people don’t think about them. Like other software, however, browsers do get old and slow. Last November, Firefox released a new version to take advantage of new ideas and technology available in the past few years. Their Project Quantum looked at every bit of code in search of obvious and not so obvious performance issues, for example, code that slowed down the time it takes to load web pages. The new browser, like Google Chrome, also takes advantage of computer hardware that performs computations in parallel instead of one after another. The Firefox team has written up a description how they recreated their browser, including problems they had to solve.

Cyclist Travels US with Google Assistant at Wheel

Cyclist Max Lippe started out from New York on December 31st, 2017 on his way to Las Vegas for an electronics trade show. His bike has a special device attached to one wheel which helps him climb hills and provides information about his ride. The device includes Google Assistant to provide data about the ride and the device. It’s both a publicity stunt and a way to let people know about ebike technology that doesn’t require purchasing a new fully electric bike. Lippe’s ride will average around 16 miles per hour per day for 2800 miles through 11 US states and nearly 125,000 total feet of elevation.