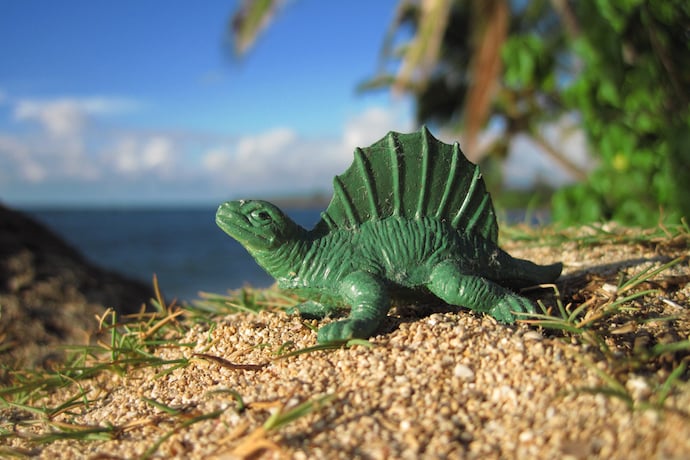 Dinosaurs used to run around on the grounds of NASA in Maryland. In fact, they probably ran around a lot of places, but some of these particular dinosaurs left footprints in sandstone.

Which is what Ray Stanford discovered in 2012. Stanford, an amateur paleontologist was at NASA in Greenbelt, Maryland visiting his wife who works there. He noticed an outcropping of rock, looked at it and found a nodosaur footprint — “think of them as a four-footed tank,” Stanford said. The rock was an important find. But it couldn’t just stay in place. It was in a construction zone.

That’s where Stephen Godfrey came in. Dr. Godfrey is Curator of Paleontology at the Calvert Marine Museum in Solomons, Maryland. His job was to make sure scientists could study the rock for a very long time.

While crews carefully dug up the rock as big as a dinner table, it was decided that an exact copy of the stone needed to be made. A back-up copy was needed just in case the original stone was damaged while removing it from the ground.

Dr. Godfrey had two choices. He could scan the rock and print it using the then fairly new technology of large 3-D printers, or he could make a mold the old-fashion way and pour an exact replica of the rock.

Dr. Godfrey decided the scanning option wouldn’t work as well as molding and casting. Scientists needed to be able to touch the recreated rock and be able to feel the indentations in as much detail as possible.

“We could have scanned it, but the 3-D printer can’t do the high resolution work we needed,” he said.

So he created his fake rock the old-fashioned way, out of plaster. Before moving to Maryland, Dr. Godfrey worked on dinosaur digs in Canada where he sculpted the missing bones of dinosaur skeletons and reassembled them so that museums could display them.

First he and his team prepared the rock by pouring a thin layer of melted petroleum jelly onto it. This would let the mold release easily. When the rock was ready, they mixed up silicon rubber into a thick liquid form. It would pour, but not very fast. Dr. Godfrey said it was like working with honey.

They poured on a very thin layer then waited. Then they put on another thin layer and so on until their mold was half an inch thick on the top of the rock.

When that mold was pulled off of the original footprint-bearing stone, they used it to make the plaster copy (a cast) of the rock. Finally, Dr. Godfrey’s son Michael painted the copy to resemble the original stone.

Dr. Godfrey didn’t realize at the time that the results would be paleontological magic.

Mr. Stanford moved the painted plaster copy of the rock to his basement. He spent many hours, feeling and outlining the indentations and thinking about how they could have gotten there. He invited other paleontologists to join his search.

They found footprints of a dinosaur parent and baby. They found three-toed meat-eating dinosaurs that are closely related to birds. And, most surprisingly, they found mammal footprints.

“This is the mother lode of Cretaceous mammal tracks,” said Martin Lockley, paleontologist with the University of Colorado, Denver. “We’re looking at the largest known slab that has mammal tracks on it from anywhere in the world. I know of four or five sites in the whole age of dinosaurs and some of them only have one or two, and here we have approximately 100 footprints on it. It’s amazing.”

Dr. Godfrey’s detailed work paid off. For this level of research, he says that making casts is the still the best technology.

However, he sees other uses for 3-D printers in his field.

His museum wanted to have an exhibit on Maryland Dinosaurs. “We didn’t have the molds and we didn’t have the budget for the exacting work that goes into molds,” he said. What they did have were the online-available digital files of scanned dinosaur heads and a maker-bot. For a few dollars in the cost of plastic and paint, his team was able to print and display skulls of the plant-eating Tenontosaurus, the bird-like Ornithomimus, and the meat-eater Deinonychus.

“You can get a lot of very accurate information from these,” he said. “Just not as much detail.”

What is 3D printing?