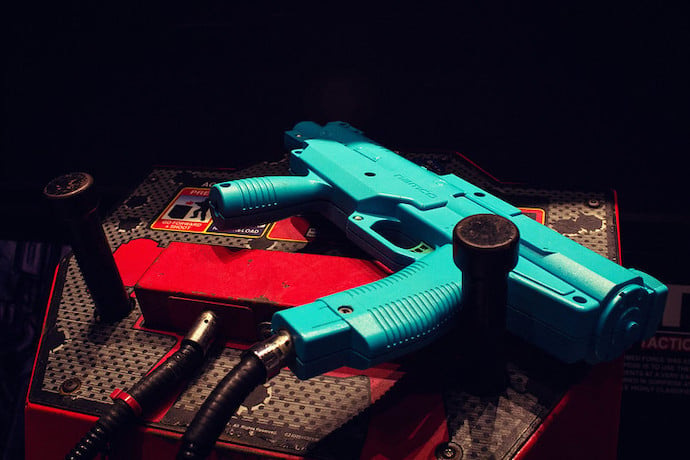 These days, we have fancy virtual reality systems that allow us to become part of the game. Unfortunately, they take a lot to set up; you need all sorts of boxes and sensor bars for the virtual reality headset to know where you are. Recently, the Oculus Quest made it so you can experience virtual reality without extra stuff, but even that needs four cameras on the headset itself!

It may be surprising to hear, then, that in the 1980s people were shooting bad guys on their television screens. There were no extra bars or boxes; just plug in a gun controller and shoot the enemies on screen. So how did people work out that technology long before virtual reality was a thing?

There were a few different takes on making a gun that can shoot things on-screen, but the ones that made it into the homes of people around the world were called “lightguns.” While it was light to carry, that’s not why it got its name; it’s because it used light in a clever way to detect where the player was aiming.

To achieve this little trick, the game and the gun had to work together. The game would show bad guys on the screen, and the player would point the lightgun at an enemy and press the trigger. When this happened, the gun told the game that the player has fired the gun.

The first method that was used was employed by the Nintendo Zapper. When the player pulled the trigger, the game made the screen completely black. Then, it put a white box over the first enemy, and asked the gun if it could see the box using its light detector. If it couldn’t, it moved onto the next target until the gun registered a hit. If no hits were registered, the game assumed the player had missed every target.

This is useful if you just want to tell if the player shot an enemy or not, but what if you want to let them shoot anywhere on the screen? To fix this, lightgun technology made a second jump. This was introduced in the GunCon, which was the next step up from the Zapper.

This time, instead of highlighting the enemies with white boxes, the screen would draw a line of teeny-tiny white boxes in a line across the television screen. It would then continue down the screen until the whole thing is white.

While it did this, the gun would count how long it took until it saw the line of white boxes go past its field of vision. The game would ask the gun how long it took for it to see the white line, then compares it to where the line was at that time. That’s where the gun was pointed!

One thing to note for both of these methods is that this went by very, very quickly for the player. If you played one of these games, all you’d see is the screen flashing white. This was very useful for the game developers, as the white flash looked just like a gun firing!

It’s amazing to think about how game developers managed to achieve so much with the technology they had back in the ‘80s. Who knows — maybe something similar to the lightgun will make a return in the future!

How did duck hunt gun work

How did light guns work