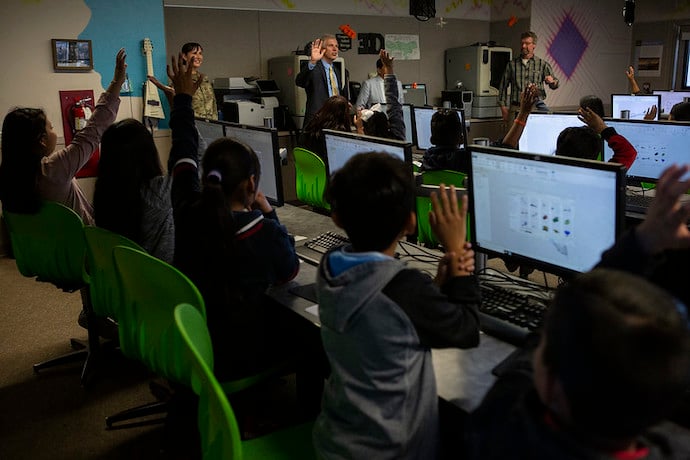 If you’ve ever been interested in programming microcontroller computers like Arduinos, you’ve probably heard that you have to use the C programming language. This is mostly true. Today, however, we’re going to introduce a different language that lets you interactively program your Arduino over the serial connection: uLisp.

The very first thing I’ll say is that while the language is written as uLisp, the “u” is really supposed to be a ?, the greek letter “mu” which often means “micro” in science, so ?Lisp is “microlisp” because it’s for “microcontrollers” like Arduino.

What is uLisp? It’s an example of the ancient lineage of programming languages called “lisps”. The first lisp was actually one of the first programming languages ever made, so they’re almost as old as programmable computers and even older than the home computer by a couple of decades. The family includes Racket, Scheme, Common Lisp, and Clojure among many others.

All lisps have a similar design philosophy and very, very similar syntax: prefix notation with lots of parentheses. So in every lisp, instead of saying “3+4” you’ll say “(+ 3 4)” and instead of “print(10)” you’ll say something like “(print 10)” and this is how you’d write the “blink” function that’s the equivalent of “hello world” for microcontrollers

Compare it visually to the normal blink written in C:

There’s no separate “setup” or “loop” here, just a single function that runs the program: b for blink. This function is defined with defun, which is a lot like saying def to define a function in Python. Instead of constants HIGH and LOW for whether a pin has power or not, we instead writing uLisp’s version of “true” and “false”: t and nil.

Let’s talk about how to get uLisp working. To load uLisp you need to get the uLisp code from the main website, paste it into your Arduino studio program, and then compile & load it onto the microcontroller as you would any other program. Once you’ve done that your microcontroller will be running the uLisp interpreter! The uLisp interpreter listens over the serial line for new programs, so as long as the microcontroller is plugged into your computer you can load new programs and change the behavior of the board without ever recompiling for it.

So if you’ve got uLisp running right now you can copy and paste the above code into the serial monitor and you should see the number next to the prompt go down, because you’ve provided a definition that uses some of the limited space on the microcontroller.

That’s pretty cool! There’s even an edit command you can use from the serial monitor in order to edit function definitions you already made.

It ends up being a full development environment with a repl and instead of having to run a single “loop” program on the board you can run all sorts of programs.

Now, there are limitations here: because the interpreter takes up a decent amount of the memory of the microcontroller, there’s not necessarily a ton of room for your programs or uLisp data. That doesn’t mean this is just a toy, though! The uLisp site has some amazing demos, including a ray tracer, small video games, and GPS mapping app that plots your walking path on a map. Because uLisp is, broadly, easier to code in than C it’s possible to make things like this even with the smaller overhead left by running the uLisp interpreter.

If you’re like me and you first see something like this and you’re not super sure what you’d use it for here are some ideas:

So all-in-all, uLisp is a really cool language and I highly recommend you check out the docs and the examples on the main site. The language isn’t too hard to learn once you get used to the syntax, and it lets you experiment actively a lot more with your microcontroller than the slow “compile-upload” loop of writing C code.