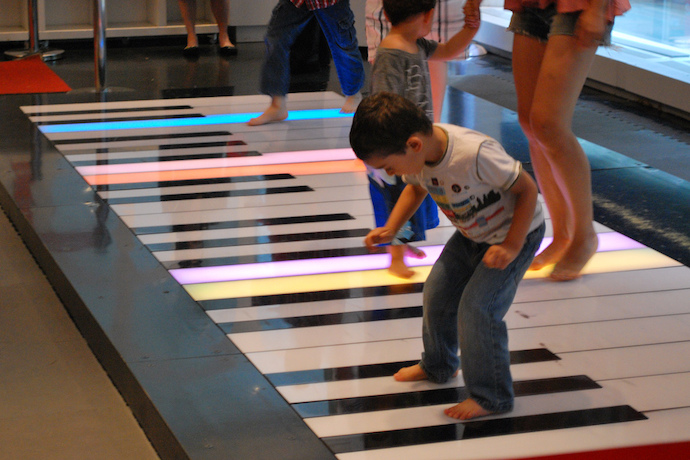 This issue, we’re back to working on TIC-80, the fantasy computer for making retro games!

As a refresher, last time we started the basics of a platformer. We talked about how to make a character react to gravity and make the ground solid. We also played with the sound wave generator in order to make custom sound effects. This time we’ll be talking about:

As a refresher, our code from last time looked like:

We used a number of global variables – x, y, vy — to represent the state of the player: their x and y coordinates and their velocity in the y direction. We then wrote a main game loop, the TIC function, that handled keyboard inputs for movement. We drew the one screen we painted with a call to map(0,0). Our code used the mget function extensively to ask TIC what kind of tile was in a location: we used this to figure out if we were standing on the ground.

This time around we’ll be moving between screens. As a reminder, in TIC-80 you have a map editor that shows you the full map of the game, split visually into a bunch screen-sized chunks:

What we want is for the player to move across this big map as they move left and right or up and down.

There are multiple ways to do this. I’m showing a way that I personally think is pretty simple, but linked below is another tutorial by Bruno Oliveira that takes a very different approach to handling levels and multiple screens in TIC. Check his platformer out and see which way you like better!

First, we’ll add two more global variables at the top of our code. This time we’ll call them mapIndexX and mapIndexY. We’ll use them to keep track of which screen we’re on. Initialize them both to 0 like in the following:

Next, we write a helper function to figure out what kind of tile is currently drawn to a part of the screen, calculated from x and y coordinates and the values of the mapIndex variables.

We can use this currTile function to refactor out our constant tests for whether our player is touching the ground.

If you’re following along, change the numbers in this function to be the indices of all the ground sprites you’re using in your game!

Now we can finally mess around with the main game loop to finish our refactoring and make the game switch screens as the player moves.

Experiment to try: We’ve coded our game so that screens are discrete units—if you leave one screen you are wholly on another. There’s nothing about TIC that requires us to treat screens that way! Instead, try making the screen move incrementally when you cross the edge.

Now let’s add a little background music. Last time we made simple sound waves in the sound editor. What’s new this time is that once you’ve made those custom sounds, you can use them as your instruments in the music editor!

This music editor is an example of a tracker. Trackers are used a lot in making retro chiptune music, particularly the kind where you’re literally reprogramming an old game boy or other hardware to make the song with their built-in soundchips. You can read the tracker from top to bottom: the start of the song is at the top and the end of the song is the bottom. The different columns are all the notes that can play at the same time. So, for example, the middle C major chord of C-4, E-4, G-4 would look like:

Try typing in this little snippet! Can you figure out what it’s the start of? Hint: it’s a song for tiny babies.

Exercise: How close can you come to replicating the sound of those Otamatone meme song covers using custom sound waves and the tracker?

One thing that might not be obvious about a tracker is that the last note played continues until you add a rest or a different note!

To go deeper into making a platformer check out my full game – with comments – here. In this version of the game, we’ll also have code to add in a few enemy types, a big boss fight, and a projectile attack.

Tutorial to make a simple platformer on the TIC-80