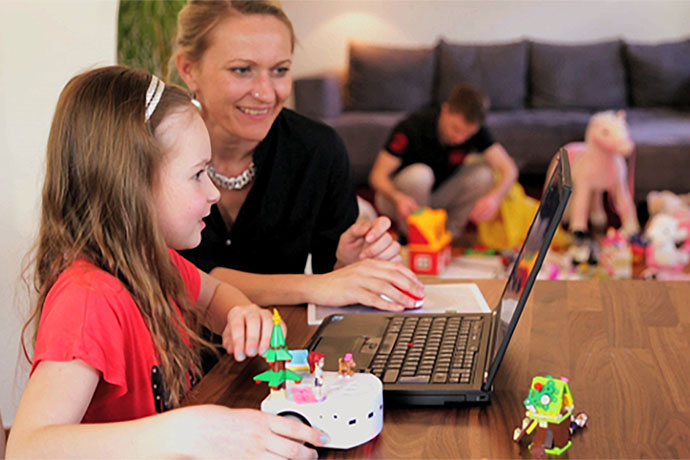 What makes a robot fun? What makes a robot educational? Fortunately these two questions share similar answers. It is fun to pick up a robot and immediately begin figuring out how to control it. It is educational to reach the limits of this type of exploration with a desire to learn how to make the robot do even more.

Thymio, a robot developed in Switzerland and popular throughout Europe, is easy to start up and extends from pre-programmed functions, to drag and drop programming, and all the way on up to JavaScript.

Out of the box, Thymio comes with five pre-programmed motion sensors, each mode represented by its own LED color combination. Press an arrow on top of Thymio to turn it red and it moves away from you, press another arrow to turn it green and Thymio follows you. At the edge of an elevated surface? Proximity sensors on the bottom of Thymio tell it to stop before tumbling down. In fact, Thymio has over 20 sensors including an accelerometer, thermometer, and a microphone.

For the youngest programmers, the visual programming environment allows Thymio to be programmed with drag and drop picture blocks that are completely text-free. This is an event-driven paradigm with an emphasis on cause and effect.

For example, we can first place an image of the four arrows on top of Thymio on the screen and select one of them. Beside this block we can place a second block with sliders to control the red, green, and blue LEDs inside Thymio. By sliding red and blue left (off) and green right (on), we have programmed Thymio to turn green when we press the corresponding arrow on the actual robot.

The second programming option available within Aceba Studio is Blockly, a style of programming similar to MIT’s Scratch language; blocks of code can be dragged onto the screen with minimal reading and typing involved. This also is mainly an event-driven environment, but we get a greater variety of blocks to choose from, including loops and conditional logic.

In addition to the programming options that Aceba Studio provides, Thymio can be used with two other fun interfaces.

Asebascratch is a relatively new link between Aceba and Scratch. After installing Scratch 2, Adobe Air, and Scratch2-ThymioII, we can open Scratch and find a new group of blocks called More Blocks, specifically for controlling Thymio. This extension gives programmers a familiar way to interact with Thymio, in a language that leads more directly to text-based programming.

To use RobotMagic, we can create a free account, click on My Dashboard, Technology, Thymio Robot, and finally select a world. For starters, try deleting the code that comes with that world. Replace it with one or two simple blocks, such as Move and Turn (both found toward the bottom of the Robot menu). Now choose a number of centimeters for Thymio to move and an angle to turn. Click Run to see the Thymio simulator follow your code. If it works, connect the Thymio robot to your computer and click Run Device. If you have already installed Aceba Studio onto your computer, your Thymio will likely follow the Blockly code, and can run when disconnected from the computer as well.

Like Acebascratch, RobotMagic is still a new product and might take some fiddling with before your robot actually runs from the programming interface. However, once it is setup correctly, RobotMagic extends the power of learning to program with Thymio.

One of the most unique features of the RobotMagic site is the Edit Code button. This allows us to view and edit the Blockly code in the language of the internet (and many other devices), JavaScript. From here, we can gradually begin controlling Thymio with the language used by perhaps the largest number of software developers in the world.

Finally, for those with a knack for building, Thymio is Lego compatible. Lego legs can be added to Thymio’s wheels, and blocks can connect to the top of Thymio as well. WIth a bit of work, you can customize Thymio’s hardware with Legos and its software with code.

Interested in trying out a Thymio? The robot can be purchased from thymio.org, in which case your thymio will be shipped from Switzerland. For a slight increase in cost, Thymio is available from a US distributer, TechyKids. For about $200 Thymio will arrive at your house within a week. Take it out of the box and let the fun begin!