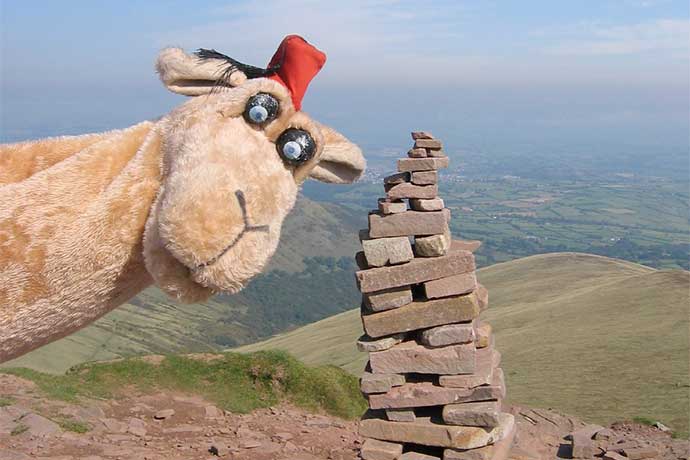 Recreational math problems and puzzles are key to learning how to solve problems. The ability to carefully tease out an answer from a complicated problem, reducing complexity and confusion to the simplest possible units, also is key to learning computer science and programming.

Every issue of this magazine will have at least one puzzle and math problem. Solutions will be offered at the bottom of the page but you have to promise not to to cheat and look up the answer. It's the honor system.

Here is the puzzle, as written down in England around 800 AD:

A certain head of household ordered that 90 measures of grain be taken from one of his houses to another 30 leagues away. This load of grain can be carried by a camel in three trips. Given that the camel eats one measure of grain for each league it goes (the camel only eats when carrying a load), how many measures were left after the grain was transported to the second house?

Like many math puzzles told as a story, the details are deliberately confusing on the surface. To solve this problem, you need to break out the story details, find any hidden assumptions, and create a strategy to solve the problem. This is the same approach people take when trying to solve a real life problem with software programming.

Here are the details from the story, what we know:

The two “therefore” statements indicate hidden assumptions in the math puzzle. These are key details. Because these details are not described, the puzzle seems harder than it is.

On the surface, the obvious answer is, there will be no grain left: the camel will carry 90 measures of grain a total of 90 leagues, eating one measure of grain for each of the 90 leagues it travels. Done. You can go home now.

However, that’s a deliberate false ending. Think for a moment about the problem: would you send 90 measures of grain this way, knowing your camel will eat it all? Probably not since it would be a waste of grain and time.

The problem is not “how much grain will be left?” The problem is, “how do you get as much grain as possible to your destination, knowing the camel will eat most of your grain?”

It appears the best we can do is save 20 measures of grain this way.

However, is there a better answer? Let’s apply our strategy, which has recovered 20 measures of grain so far, to the problem. If it makes no difference whether our camel turns around at 20 leagues or 10 leagues, both result in 20 measures of grain saved, let’s start with our camel turning around at 10 leagues. That leaves us 20 leagues to figure out if turning the camel around a second time saves us any more grain.

So let’s begin by having our camel turn around at 10 leagues and then again at 25 leagues. Here’s how the problem works out:

Clearly, patience and persistence work: we have an additional 5 measures of grain if we stop our camel at the 10 league and 25 league point to return and reload.

Is this the best we can do? Let’s do one more thought exercise, this time stopping and reloading at the 10 league and 20 league points. Here’s how it would work out:

This problem is a great example how to solve complicated problems, mostly by writing down all the details, teasing out all the assumptions, and then working different ways to solve a problem. Software programming problems often have multiple solutions where the ability to clearly define the problem, find hidden assumptions, and create possible solutions are the best way to write great code.

Most interesting of all, there are times when the nature of a programming language dictates which solution works best. It’s possible there are two possible ways to code, for example, but one way of coding is faster than another. How do you find these subtleties? You ask other coders, in person or online. Or someone happens to look at your code and makes the suggestion. It’s one way programming is a treasure hunt, a journey, not an activity with obvious answers in plain sight.

Last, and not least, this math problem was found in a book written around 800 AD and given to Charlemagne by a British scholar, Alcuin. There are not many camels in Britain, are there? Likely this math problem came from some place south of the British Isles even before Alcuin wrote it down. Apparently camels have always been hungry enough to eat what they carry.

If you’re interested in the handsome camel in the photo at the top of the story, there’s a link below.

Camel at the top of Cribyn, WaterAid Corbett Challenge – See more at: http://humphreythecamel.org/camel-diary/camel-at-the-top-of-cribyn-wateraid-corbett-challenge/