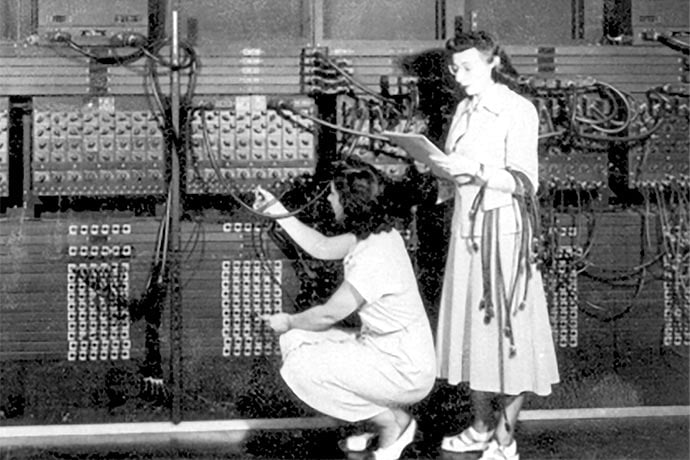 ENIAC (Electronic Numerical Integrator and Computor) was the first successful electronic and digital computer designed to calculate ballistic trajectories during World War II. The work involved often complex calculations. Because the calculations were considered clerical work, six women were hired to use their math skills to program the computer. Their title was computor. They called themselves The First Programmers Club.

These women learned to program ENIAC before they had access to the computer. They used the blueprints to define rewiring and mechanical switches needed to calculate trajectories step by step. ENIAC weighed 30 tons, used 200 kw of power, 18,000 vacuum tubes, 1500 relays, and hundreds of thousands of resistors, capacitors, and inductors. The computer was 80 feet (24 meters) long.

On the 50th anniversary of ENIAC’s successful launch, most of these women were not included or recognized despite their critical work programming the computer to perform its calculations. Kathy Kleiman, a programmer in the 1980s, founded the ENIAC Programmers Project to document the contributions and successes of these six women and other early women programmers.

Here are short biographies for the six original ENIAC programmers plus Adele Goldstine who wrote the original operations guide for the computer and trained some the programmers.

On her first day of college to study math, a professor asked if she would be better off at home raising children. Holbertson switch to study journalism, one of the few careers open to women in the 1940s, because it let her explore subjects that interested her. She found a job with the US Army at the University of Pennsylvania calculating ballistic missle trajectories. She was hired as one of the original ENIAC programmers based on her work and led the team. Holbertson went on to work with Grace Hopper developing COBOL and FORTRAN, two early critical programming languages.

Born in Creeslough in County Donegal, Ireland, the night she was born, her father was arrested and jailed for two years for his part in the Irish War of Independence. Released in 1924, when Antonelli was 3, he moved the family to Philadelphia and started a successful stonemasonry business. Antonelli took every math course offered in high school and college then graduated as a math major. Like Holbertson, she found a job after college working for the US Army at the University of Pennsylvania then was hired to program ENIAC. She later married one of the co-inventors of ENIAC, John Mauchly and helped her husband with the software designs of the BINAC and UNIVAC computer hardware he designed.

Betty Jean Jennings majored in mathematics at Northwest Missouri State Teachers College, graduating in 1945 as the only math major. Her father was a schoolteacher and farmer. Upon graduation, she applied for a job with the US Army and hired to work at the University of Pennsylvania as one of the ENIAC computors. In 1946, she married William Bartik, an engineer working on a Pentagon project at the university. Later, she helped convert ENIAC from manual computing, setting dials and changing cables, to stored program computing. She also worked on the BINAC and UNIVAC computers. In 1951, she took 16 years off to raise three children. When she returned to her career, she worked as a technology editor for a publishing company. She also worked tirelessly to document the contributions of the ENIAC programmers and early women programmers.

A native of Philadelphia, Bilas majored in mathematics with a minor in physics at Chestnut Hill College where she met Kathleen Antonelli, another of the original ENIAC programmers. She was hired by the University of Pennsylvania to work on the US Army funded project to calculate ballistics trajectories by hand. She was then picked as one of six women to program the new ENIAC. In 1947, she married Homer Spence, an Army electrical engineer assigned to ENIAC, and resigned to start a family.

After graduating from Hunter College in New York City with a Batchelors of Science degree in Mathematics, Teitlebaum was hired to work with Antonelli, Bartik, and other women at the University of Pennsylvania for a US Army project. Her work led to work programming the ENIAC computer. She eventually trained the next generation of ENIAC programmers when the computer was moved to Aberdeen Proving Ground in Maryland in 1948.

A graduate of Temple University in Philadelphia, Wescoff was hired to do weather calculations for the US Army at the Moore School of Engineering, part of the University of Pennsylvania. Apparently she was hired because she knew how to operate an adding machine. In 1943, she was hired to perform ballistic trajectory calculations then hired in 1945 as one of the original six ENIAC programmers, or computers. She resigned in 1947 to get married, when the ENIAC moved to Aberdeen Proving Ground in Maryland.

Goldstine wrote the first complete technical description for ENIAC. She also worked with Jean Bartik to convert the computer from a computer reprogrammed each time it was used to a computer that used stored instructions. She was born in New York City and attended Hunter College, then called Hunter College High School. She earned a Masters in Mathematics at the University of Michigan where she married Herman Goldstine who was involved in the construction of ENIAC. Goldstine taught mathematics at the University of Pennsylvania and trained some of the six original ENIAC programmers.

While much of the hardware design and construction of ENIAC involved men, women played a dominant role in learning how to operate the computer to perform calculations. Several of these women went on to contribute to computing for decades.

Jean Bartik and the ENIAC Women

Pioneer Programmer: Jean Jennings Bartik and the Computer that Changed the World

Her autobiography was written to encourage girls and women to consider science and technology careers. The Truman State links to a version for grades 4-6.
http://investinginkids.net/2013/11/09/pioneer-programmer-jean-jennings-bartik-and-the-computer-that-changed-the-world/
http://tsup.truman.edu/item.asp?itemId=508