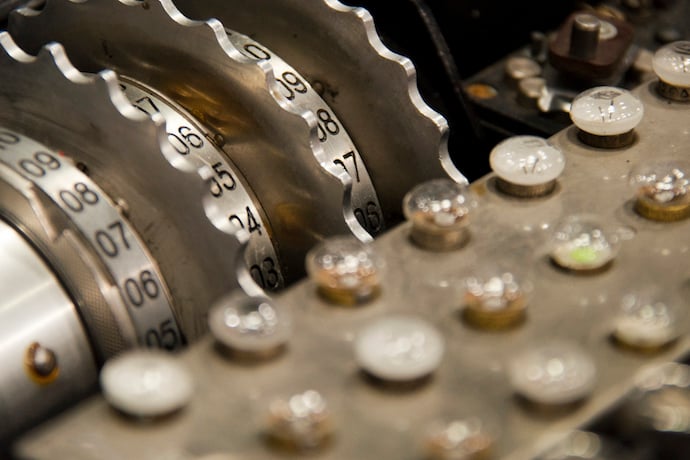 In the past few issues, we’ve covered a wide range of different ciphers and codes. This issue, we’re going to be looking at one of the most famous codes in wartime history; the Enigma code.

When you think of wars, you may initially think of fights mainly taking place with soldiers, tanks and boats. The truth is, there’s another, more hidden layer to warfare than just armies! When two countries fight, they may engage in operations to extract important information from the enemy. The idea is, if you know what your enemy is doing, you can better use your army to attack and defend the opposition.

One way of getting this information is to listen in on what the enemy is saying. This is usually done by finding the communications channels being used and secretly listening in. A good military will know of this method of attack, however, and will encrypt their message in a form of code. The ones used by the Germans in World War 2 was called the ‘Enigma Code’, and cracking it was a huge feat of computing at the time!

The Enigma Code was invented by Arthur Scherbius in 1918, and took the world by storm due to its use in World War 2. The Germans used a very complicated machine called an Engima Machine in order to encrypt their messages. The Polish managed to find out how to decrypt the messages, but the Germans then stepped up their security by changing the cipher every day. This meant that the Allies had to re-crack the code every day in order to stay on top!

It was a very daunting task, but it was by no means impossible. An Englishman called Alan Turing decided to step up to the challenge. He, along with fellow codebreaker Gordon Welchman, created a decryption machine called the Bombe, which had the task of decrypting the Enigma messages as quickly as possible.

The Germans were very confident in their code, using it for ground, sea, and air communications. This meant that, when Alan Turing and his Bombe managed to begin busting the code, the Allies had access to a lot of the German’s information. Turing’s contribution to the war effort was very large; so much so that the prime minister of the time, Winston Churchill, personally commended Turing and said the war would have been much harder were it not for Turing’s efforts. Not every war hero is a soldier, after all!

Of course, these days, we know all about how the Enigma code worked. There are even sites on the internet that allow you to encode and decode messages like the Germans did during World War 2. Check the top link in the additional links for this article, then scroll to the bottom until you see the encoder and decoder. Set the positions to ‘B’, ‘C’, ‘A’, and ‘D’, then type the following into the ‘Encrypted Text’ box and click ‘Decrypt’ to find out what it says:

If you want to send a reply, what message would you send back? To work this out, type your message into the ‘Inputted text’ box and click ‘Encrypt’. To test it, try typing ‘Let’s meet up today’ into the box and clicking ‘Encrypt’, then check your result to the answers below!

Count On: Codebreaking: The Enigma Cipher