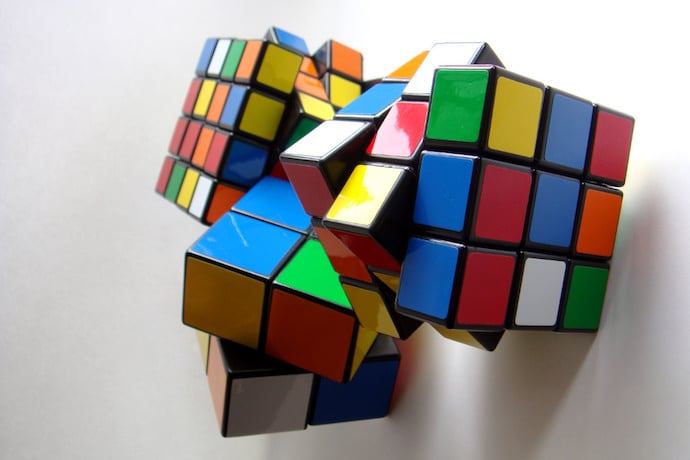 Six colours. Nine squares to a side, six sides to a cube. 43 quintillion possibilities. Invented in 1974 by Erno Rubik, the Rubik’s Cube is fascinating and frustrating. The concept is simple: slide each row of cubes up, down, right, left and sidewise until the colours on each side match.

World champions can solve the cube in just over four seconds. Experts can solve it using their feet or wearing blindfolds. The Rubik’s cube might be a lengthy puzzle, but it can cracked by anyone who puts their mind to it.

How Difficult is the Cube?

If you made a computer check 1,000 combinations every second, it could take up to 1.36 billion years to solve the Rubik’s Cube. Definitely not a puzzle you want to attempt by trial and error! There are dozens of techniques for solving the cube, so it’s important to try a few and find the one that works for you. Some people memorize move sets. Others focus on the logic behind switching and replacing individual cubes. You can use mnemonics, stories, visual tricks.

Get to Know Your Cube

If you don’t own a Rubik’s Cube you can use an online version. It’s not quite as intuitive as holding the toy in your hands, but there’s no chance of dropping it and losing your spot. The sides of the cube are called the Front (facing you), Back, Top, Bottom, Right, and Left. Each side can be turned clockwise or counter-clockwise.

A centre piece will always be a centre piece. No matter how cleverly you twist and turn you can’t transform it into a corner or an edge. Likewise, edges are always edges and corners are always corners.

Next, the yellow centre — and therefore the yellow side — will always be opposite white. Blue faces green, and orange is opposite red.

Together, these two facts have a surprising conclusion: before we make a single move, we know exactly where each piece of the cube is supposed to go. It’s just a question of moving it there.

Many cubers start by solving “the white cross”. I like to do this via “the daisy”:

Once you have the daisy:

The next step is to add the white corners. The most straightforward are the pieces on the bottom layer of the sides.

If a white piece is in the top layer, start by bringing it down to the bottom. Spin the bottom layer out of the way and fix your white cross. The white corner will either be on the bottom or one of the sides.

Keep going until your top layer is solved! You’ll know it’s correct if each side has a coloured ’T’.

The first layer can be solved with straightforward logic. The next two layers get trickier. Most cubers memorize algorithms and learn how to apply them. For example, an algorithm to transform a yellow hook into a yellow cross looks like this:

That’s not too convoluted, but what about this algorithm to solve the yellow corners?

When you may have to remember ten or twelve of these, it’s easy to make a tiny mistake that wrecks the arrangement of the entire cube.

Mnemonic devices are patterns that turn dull info (like cubing algorithms) into something memorable and fun. They come in different flavours for different learning styles.

Instead of boring terms like Front, Top, and Right, one visual cuber decided to call his sides “Face”, “Wings”, “Hat”, “Shoes”, “Knife” and “Fork”. Clockwise and counter-clockwise became “old” and “new”. Turning the top clockwise was pictured as a top-hat (“old hat”), whereas turning counter-clockwise was a “new hat” like a snapback or a tuque.

The concept is to create pictures out of move sequences. The more ridiculous the better. It doesn’t matter if you imagine cat tails, swords and shields, halos, or hooves and horns, as long as the result means something to you.

Josh Neufeld taught his kids how to cube by making stories out of move sequences. The pattern for fixing white corners starts with a scared kid at the top of the slide. First, you need to move out of the way so the cared kid can come down. Once he clears off, it’s your turn to climb back up.

When you walk, you don’t worry about the details of adjusting your muscles and shifting your weight. You just walk. The more you repeat a physical activity the more it becomes second nature.

Some patterns pop up a lot cubing algorithms. For example, R’FRF’ is called “the sledgehammer”, and FR’FR’ is “the hedgeslammer”. Instead of memorizing a list of moves you can practice the sequence until it comes automatically. Then, when you need to transform your yellow hook into a yellow cross, you can think “execute the sledgehammer!” and your hands do the rest.

Cubing takes practice, just like any other skill. Explore on your own, watch videos, and read tip sheets. That pesky Rubik’s Cube will be solved before you know it! Then you can move on to mastering variations like the 4x4x4 or the pyramid.

How big is 43 quintillion?