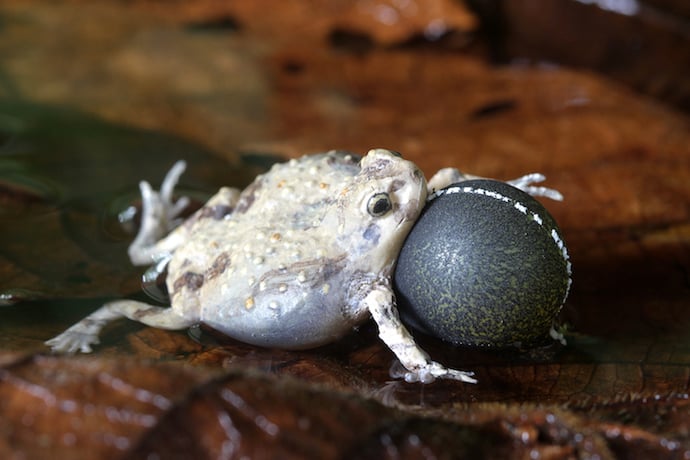 A brown frog puffs out his vocal sac and he calls “whine.” To human ears, it isn’t that impressive. He sounds a bit like a laser in a video game. No one moves near him.
He tries again adding a deep grunt. “Whine, chuck.” He still sits alone. Finally he puffs up his chest and calls: “Whine, chuck, chuck.”

A female frog hops over and slides up next to him. After a moment, a scientist gently removes her from the pad. And another female is brought in for the test.

These female frogs are disappointed in love, but Dr. Taylor is thrilled. The world’s first robotic túngara frog is hitting all the right notes. And his successes and failures in the dating world are not only telling scientists about froggy courtship, but a little bit about humans as well.

Dr. Taylor teaches at the Salisbury University in Maryland, and he studies frogs at the Smithsonian Tropical Research Center in Panama. He used to watch and listen as male frogs called. He wondered how the female frog picked a mate from all the different calls.

Is it frog’s vocal sac? Or the call itself? And even the call has two parts, which part is more important? And how is any of this connected to humans?

One Thing At a Time

Many scientists take problems apart so they are only working with one thing at a time. But how could Dr. Taylor do that with the frogs? You can’t train a frog. You can’t ask the frog to only say part of the call.

Dr. Taylor and his colleague Michael Ryan of University of Texas, turned to engineers. Can you build me a frog? they asked. The engineers took the challenge. First they made a plastic frog. Then they added a balloon for a vocal sac. They needed speakers so the female frog could hear their robofrog call. And they put in a computer coordinate the different pieces.

Finally, robofrog is ready for a date.

Again and again he calls but does not fill up his vocal sac. The females aren’t interested.

Next he inflates the vocal sac but doesn’t call. Again, the females have better things to do.

But then he blows up his vocal sac, and give a full call. The females come hopping.

“The females are paying attention to when they hear the call and when they see the sac move,” explains Dr. Taylor. This was information the team got through robofrog. It was something no one knew before.

What’s more, says Dr. Taylor, other scientists are excited about the outcome because “humans do the same thing.” When we can’t quite hear people speaking, we look for their lips moving. Our brains hook together the sound and the sight. Then we understand. Scientists are trying to understand how the frog does that, and that might help people who have a hard time hearing when they are in crowds.

Article from Discover Magazine: “4 Robots that are Saving the World