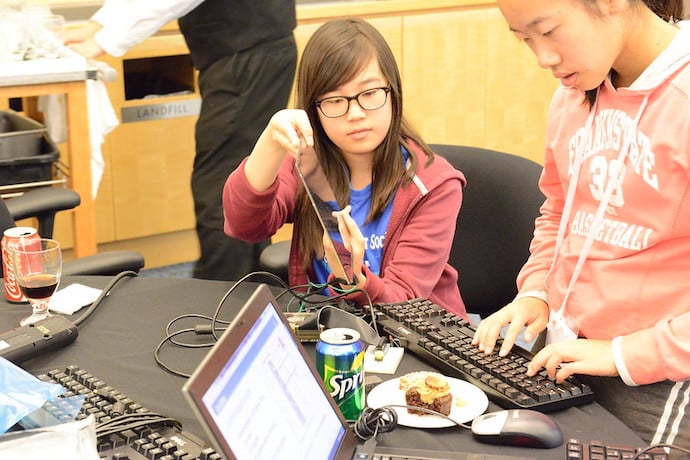 Scratch is the biggest blocks-based programming language out there. But it’s not the only one! Today we’ll take a look at a really cool and extremely powerful blocks based language called Snap!. (The exclamation mark is actually a part of the name, but I am also excited about this.)

Scratch is the biggest blocks-based programming language out there. But it’s not the only one! Today we’ll take a look at a really cool and extremely powerful blocks based language called Snap!. (The exclamation mark is actually a part of the name, but I am also excited about this.)

Snap! looks a lot like Scratch: but under the hood it’s actually pretty different. To show that, we’re going to do a version of the factorial function we showed in our article on recursion also in this issue.

If you remember, a factorial is a mathematical formula shown with an exclamation mark. The factorial 3! is calculated by multiplying all whole numbers between 3 and the number 1: 1 * 2 * 3 = 6. Therefore, 6 is the value of the factorial 3!.

Neat! You can see that these are almost exactly alike, except that in Snap! the way you get a value out of the function is with the report block instead of return like in Python.

If you’re an experienced Scratcher and you’re thinking “hey, there’s no ‘report’ block in Scratch?” you’d be right! In Scratch, only the built-in blocks can return values, like the blocks under operators. How would you write the factorial in Scratch? Well, here’s an example from the official Scratch wiki!

It’s doable but involves creating a list and having extra steps.
Okay, well what else is different in Snap!?

First, you can group sprites together yet have them move independently. Here’s a little example involving a cartoon tank with turret.

Can you do this in Scratch? Well, like the factorial example the answer is “yes, but it’s harder”. That’s essentially my pitch about Snap! in general: it takes things you can do in Scratch but are really inconvenient and makes them a lot easier to do.

Here’s one last really little example of something convenient in Snap! but awkward in Scratch: for-loops! For-loops are how you do something repeatedly, but count how many times you’ve done the thing so far. Most programming languages have them but in Scratch you have to do something like

Meanwhile in Snap! you can instead just do this:

and you don’t even need to make a seperate variable as the loop counter! That’s only a little bit of savings if you have one for-loop, but if you’re writing physics-heavy code that needs multiple for-loops having to create variables for each is a real pain.

Lastly, here’s a simple example of the fractal Koch’s curve which is made just a little simpler by using variables that only exist inside a single script. In most programming languages these are called local variables.

This is also my promised example from our recursion article that I said you’d find here. Try making this yourself and running it! It’s pretty neat.

Now is Snap! nothing but an improvement over Scratch? Well, not really. It’s a little rougher around the edges. For example, if you’re wondering how to share your project you might be surprised to learn that you need to go under File then Open under the main menu and then select share. Oh yes, you need to “open” your project even if it’s open! There are other small things like this: quirks and inconveniences. But, in the end I think Snap! has a lot of cool features, the bulk of which could fill a college computer science class, and is a great next step beyond Scratch.

Build your own blocks