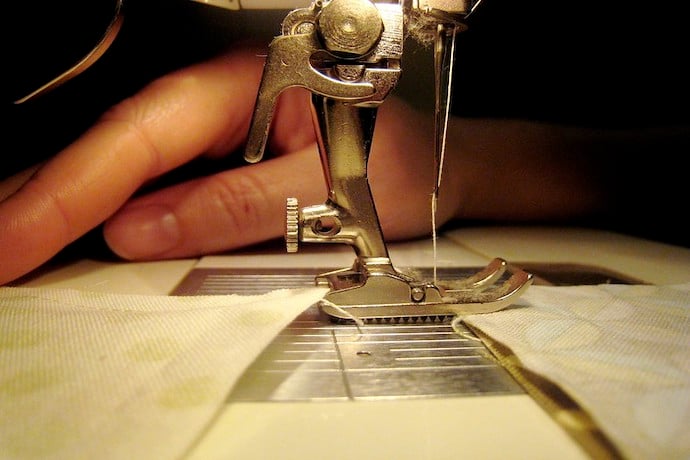 Making circuits in electronics is great fun, but often means you need to learn to do things like soldering or you need a wide variety of components. In this project we are going to explore making a circuit by sewing instead!

We are going to use some “conductive thread” which you can order online. It’s like a thicker embroidery thread that you can sew with but it also conducts electricity. It can be fun to use to add circuits to clothing or soft toys or any fabric project you can think of. There’s a global movement of people making “wearable” circuits and there are lots of ideas out there to explore and try.

We wanted to start simply and make a flower that has a nice cheerful yellow LED in the middle of it. For this we used some conductive thread, some normal thin cotton thread, a single yellow LED, some scraps of felt material and a small 3v coin cell battery. The idea is that we will sew all the electrical connections, including some large pads of stitches to make the battery connections which will be in a small pouch in the flowers “stem”.

We roughly cut two strips of green felt making the width of the felt a little bit wider than our coin cell battery, ending up around 25mm wide. WHen laid on top of each other one of the felt strips was long enough to fold back over the shorter strip to make a small pouch area for the battery. We threaded a tapestry needle, a sewing needle that has a larger eye for thicker thread, with some of the conductive thread.

We then used a small set of pliers to twist each of the 2 leads of the LED into small loops. We made sure to note before this which was the longer leg (positive side or “anode”) and which was the shorter leg (negative side or “cathode”).

We first sewed the negative cathode side of the LED to the top of the longer green strip. We made multiple stitches (around 6 stitches) through the loop to make sure the LED was well attached but also that we would make a good electrical connection to it. Without detaching the thread we continued to then stitch down one side of the stem attaching both the long and shorter strips together. As we got to the end of the shorter strip we did a big stitch inside which jumped across to the middle of the shorter green strip. We then did a lot of stitches, just through the upper shorter strip, to make a big pad which is going to be our negative battery connection. We then finished this with a knot and cut the thread. Next we started again to do the other side of the LED and the positive connections. Make sure to keep your stitches on this side as close

to the edge as you dare so they won’t be in the way inside the pouch later. We, again, stitched through the anode loop and down the side of the two strips. This time we sewed across to the centre of the fold over tab of the longer strip and made a large pad of the conductive thread which will be our positive battery connection.

Next we swapped for a smaller needle and some regular non conductive cotton and sewed across the two strips. This sealed shut the end nearest the LED. We then got some stuffing and stuffed the stem using a small BBQ skewer to make sure our filling went right to the top. Next we used non conductive cotton again to sew across the bottom of the shorter strip to seal the stuffed section. Finally for the stem, we folded over the flap/pouch and we used non conductive cotton to carefully sew the sides of the strips together to form the pouch. It’s important to make sure that, on the positive stitching side of the circuit, you sew it in a way that the positive conductive stitches are inside the seam rather than inside the pouch. You can now try pushing your coin cell battery into the pouch with the positive side facing out and the LED should light up!

To finish your flower, draw a nice flower shape on another piece of felt. We used a thick red marker pen to do this and we liked the idea of having the red edges to our flower so we used that side of the felt. We trimmed our flower out with scissors and carefully made a hole for the LED in the centre using again a BBQ skewer to poke a hole. Finally fit the flower over the LED and we secured ours with a tiny spot of glue.

We think this simple project is a great way to get started with soft circuits but there really are no limits to what circuits you can create using conductive threads. There are also lots of electronics components, microcontrollers, and other small devices that are sold to create wearable circuits so you can make some really complex projects that can combine into clothes, soft toys or anything else you can imagine!