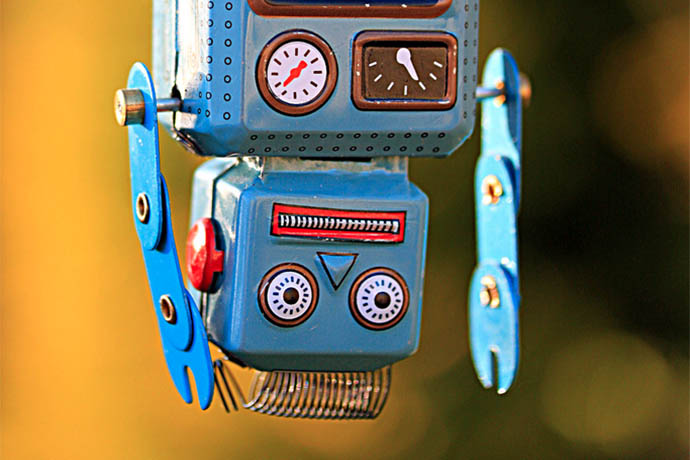 Imagine if you never had to clean your bedroom or your desk or anything. What would happen?

At some point, you would run out of money to buy new clothes to replace the dirty ones buried in some far corner of your room. And you would lose sight of your books and other stuff. Rules like “clean your room” are needed to make sure you have clean clothes, can find your stuff, and don’t waste too much time digging through garbage.

You might argue with parents about what kind of rules, and how often to apply them, but everyone knows rules exist for a good reason. It’s why, left alone with no rules, everyone would straighten up their room and their desk eventually. Some would do so more often than others, of course.

Robots and artificial intelligence software also need rules to work well. Without a rule to stop doing something after some condition is met, robots would repeat actions forever or until they powered down. Rules for robots also ensure they don’t hurt people or property and that they perform tasks they’re designed to complete.

What rules would you write to make sure robots didn’t make a mess and destroy everything?

Nick Bostrom, a philosopher, worries that we could create an artifical intelligence that does one thing really well but without being programmed to act based on human values. In his example, the AI might build paper clips so well it goes on to destroy the human race in its efforts to build paper clips with all kinds of materials. Then the AI figures out how to go into space. Who would stop it?

In Bostrom’s example, clearly his paper clip robot would need rules to use only one material, not humans or trees or any material that would endanger human life.

Susan Blackmore has studied memes — think cat videos: ideas that replicate themeselves as they move from one person to another — and the technology equivalent called temes — ideas technology spreads to keep itself alive. In an interesting TedX video, Blackmore suggests we could view human evolution as technology’s way to evolve itself into artifical intelligence and existence without the need for humans.

In Blackmore’s example, if temes are real, if technology uses the human race to evolve itself into existence apart from humans, then we would need rules to make sure technology always needed humans to operate.

He later added a law numbered zero, before the first one and which has the highest importance:

Asimov’s Three Laws (plus 0!) summarized ideas in his head, as a writer, and ideas from science fiction stories he had read and conversations with other people. Since publication of Runaround and later I, Robot which included the story, writers, scientists, programmers, and many others have debated these three ideas as well as others.

The concern about the dangers of artificial intelligence has a name, AI Anxiety. The term might sound funny but we live in a world where computers use AI to recognize your face, decide what stories to show you in Facebook, fly planes, brake your car, and do many other things. For example, computer speech recognition software today understands more than 90% of what is spoken into a microphone, with the error rate going down quickly.

Asimov had a subtle response to the dangers of robots and AI. In talking about how he created his Three Laws of Robots, he said, “one of the stock plots of science fiction was … robots were created and destroyed their creator. Knowledge has its dangers, yes, but is the response to be a retreat from knowledge? Or is knowledge to be used as itself a barrier to the dangers it brings?”

Today, with lots of experiences with software failures, we know knowledge has its limits, too. Humans can’t think of every possible outcome and program to prevent the worst ones. The risk is that there are outcomes a smart computer could think up to circumvent any human rule. In other words, we should proceed with caution and, as Asimov points out, value the pursuit of knowledge as we make decisions about what rules for robots we set up.

The fear of robots and human creations smarter than us that might destroy us also is part of our culture. Think of Frankenstein or the Golem stories. And some countries like Japan have positive views of robots and technologies while European and US countries have a history of worrying about using machines and technology to play God.

Finally, to make things more interesting and complicated, there is a moral issue with self-driving cars that applies to all AI: if your car encounters an unavoidable accident, should it minimize the loss of life, even if that means killing people in its car? Or should your car protect the occupants of its car at all costs? And how should the AI in the self-driving car make this decision, randomly or with strict rules?

Building safer cars and limiting speeds for self-driving cars would be useful rules to reduce this moral problem, but the problem will always exist. It’s a problem humans have always had with technology and our existence on this planet. As we reduce or eliminate one problem or discomfort, others appear that need to be dealt with. The question is where, when, and how to set rules.

Why Self-Driving Cars Must Be Programmed to Kill

Do We Need Asimov’s Laws?

Why Asimov’s Three Laws Of Robotics Can’t Protect Us

A really excellent in-depth discussion about the limits of Asimov’s Three Laws and alternative more cooperative ways to set rules and limits for AI.
http://io9.gizmodo.com/why-asimovs-three-laws-of-robotics-cant-protect-us-1553665410

When Should a Robot Say No to Its Human Owner?

There are valid reasons machines should be programmed to say no.
http://www.slate.com/articles/technology/future_tense/2016/01/when_should_a_robot_say_no_to_its_human_owner.single.html