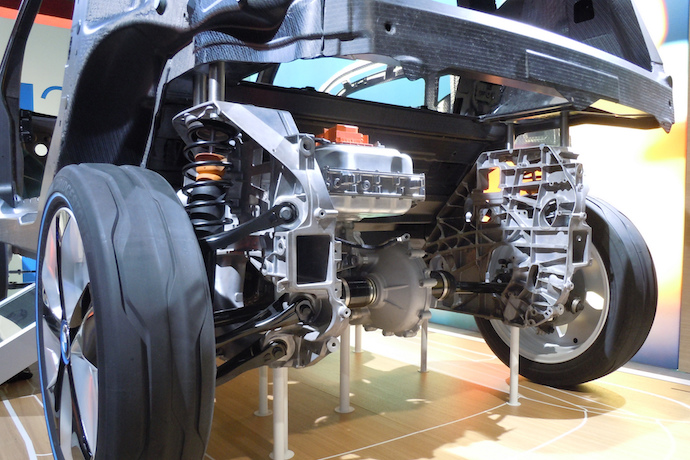 In August we explored three low-cost motors that are commonly used in entry-level robotics projects. Whether using a hobby motor to build an electric “color blender” or drawing bot, a stepper motor to control a simple elevator, or a servo motors to control a robotic hand, we need a power supply to turn our creations on. However, each of these three bots had to be disconnected from the power source to turn off. As such, our elevator continued going up and down until the batteries were actually removed and our drawing bot drew until we disconnected it!

This is fine for our first robotics projects, but to make a more user-friendly robot we need a better way to turn the power on and off. One of the most straightforward ways to do so is by adding a switch or button to the circuit inside our robot. A switch can be thought of as a button that can be pressed or flipped to either connect or disconnect the wires, which in turn either allows or blocks the flow of current (electricity).

For example, instead of connecting the color-blending bot with alligator clips and disconnecting the clips to make the hobby motor stop spinning, we could give the motor a stand and add a switch that we flip to turn the motor on and off. Now it is one step closer to a robotic toy that we would find for sale at a store!

The same goes for our tree house elevator. During our first iteration of an electric elevator, we did not include a switch, and thus had to either remove the batteries or disconnect the circuit in order to make the elevator stop. For our second iteration of the elevator project we attached the same stepper motor to a cardboard-box tower, and added a switch to turn the motor on and off. Now the elevator stops at the push of a button as opposed having to take the circuit apart!

Although the concept of a switch is not difficult to understand, actually adding one to a circuit introduces some complexity. Most switches need to be soldered to the wires in the circuit. This requires a soldering iron, patience, and most likely adult supervision. However, most robotics projects will eventually require soldering in order to connect the wires so it is a great skill to start practicing. If soldering is not an yet an option, it is fairly easy to find switches that fit into breadboards, and breadboard circuits are a great option for anyone interested in diving into solderless electronics and robotics projects. More information on breadboards can be found in the December 2015 issue of Beanz.

Another factor to consider when working with switches is what type of switch makes the most sense for a given project. A few common options are pushbutton switches, toggle switches, slide switches, rotary switches, and rocker switches. In addition to the style of switch, some switches are normally open (NO), while others are normally closed (NC). By adding a normally open switch to a circuit, the load (in our case the motor) will be off until we push the button or flip the switch. However if we would prefer the load to be on unless someone holds a button down, we would use a normally closed circuit instead. Be sure you know whether you have a NO or NC switch before soldering it into your circuit!

If you have ever made a simple circuit to turn a light, motor, buzzer, or other load take it one step further by adding a switch. No switches or buttons at home? No soldering iron? No problem. Creative folks have shared ways to make simple switches with household materials (paperclips, brads, …) online. Controlling the flow of electricity through any circuit gets you one step closer to building your own robot!

Use a Breadboard to Build an LED Circuit