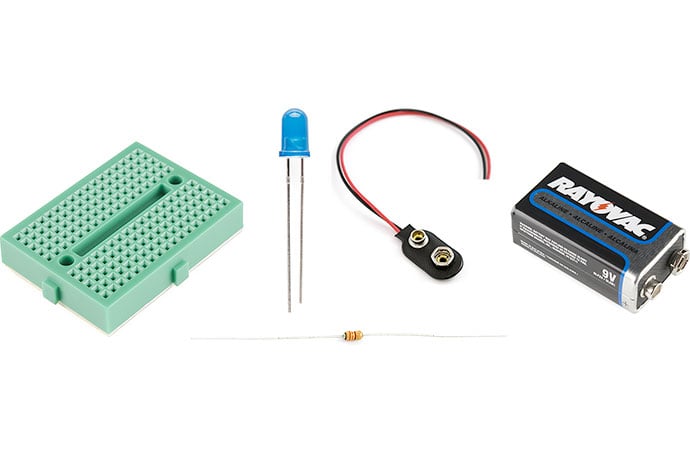 Say you are an educator, a parent, or self-motivated student looking into teaching or learning about circuits. You may have accomplished great things with kits such as Snap Circuits, littleBits, SAM Labs, or other electronics sets, but you want to experience the fun in a more “pure” form. Breadboards are a great way to go back to basics.

You could purchase LEDs, resistors, switches, wires, and batteries and simply twist and tape them together. You might even buy a set of alligator clips to hold the components in place.

Back in the day, people prototyped circuits in just this type of fashion, taping electronic components together on the wooden breadboards laying around their kitchens. All this gets the job done, but the frustration of troubleshooting poor connections helped motivate the creation of the breadboards now sold in electronics stores and referred to in just about any micro-controlled project.

At first glance, breadboards appear to be thin rectangular boxes lined with rows of tiny holes. However, inside the “box” lie strips of conductive metal that run below each row of holes.

Looking inside a breadboard is probably the best way to understand how it can be used to hold a circuit together. Generally speaking, there are two strips of metal on both the right and left side that run top to bottom (the long way), and many shorter strips in between that run side to side (the short way). The holes on the surface of the breadboard serve to hold wires and electronic components in place, and the strips of metal below them serve to conduct electricity between components.

To power up a circuit built on a breadboard, purchase battery caps for a 9V battery, or a battery pack with two wires extending out that can plug into the holes of the breadboard.

One of the easiest and most popular beginning breadboard projects is to light up an LED. All that is needed is a 9V battery and cap, an LED, a resistor (between 150-250 Ohms should work), and a jumper wire.

If you look closely at any LED, you will see it has two leads and that one of the leads is slightly longer than the other. This is because the LED is polarized, and the longer lead indicates that it is the positive side.
A good way to begin building the circuit is to put the cap on the battery and connect the wire extending from the positive side of the cap (usually red) to any hole in one of the two long columns on either side of the board. Do the same for the negative side of the battery (usually black), connecting it to one of the two long columns on the other side of the board.

You are now ready to add a switch, more LEDs or other loads to your circuit, or even try out a microcontroller such as Arduino.

Most entry-level Arduino/SparkFun projects require a basic understanding of how to work with a breadboard, as the microcontollers themselves have a limited number of holes for wires and loads. The breadboard serves as an extension to the microcontoller, able to hold many more electric components in place, and connect them all back up to the computer chip(s).

Everything you need to get going on breadboarding can be found online. However, if time allows, try looking up small local electronics stores and making a trip out as you delve further into breadboarding and circuitry. A classic example is Halted Specialities in the Silicon Valley where both Steve Jobs and Steve Wozniak used to shop for parts as high school students. Wondering through such stores will likely give you many ideas for future electronics projects.

Those new to electronics and eager to jump into Arduino or other micro-controlled projects may find it helpful to first try wiring up a breadboard with a battery, resistor, jumper wires, and an LED or two (or another common loads), before firing up the microcontroller.

Most entry-level Arduino/SparkFun projects require a basic understanding of how to work with a breadboard, as the microcontollers themselves have a limited number of holes for wires and loads. The breadboard serves as an extension to the microcontoller, able to hold many more electric components in place, and connect them all back up to the computer chip(s).

Wire strippers might come in handy in case there is not enough exposed wire.
http://www.amazon.com/10-Black-Leather-Battery-Connector/dp/B00IPBQNNY/ref=sr_1_2?ie=UTF8&qid=1446283079&sr=8-2&keywords=9V+battery+cap

An array of electronics supplies for breadboards and otherwise.
https://www.pololu.com/

How to Use a Breadboard