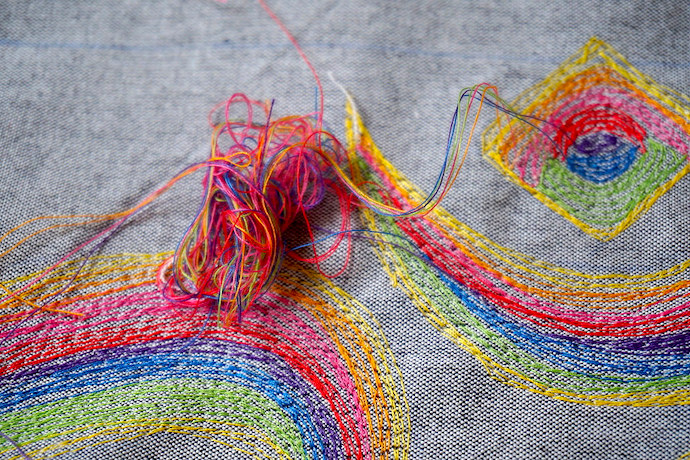 You’ve learned how to print triangles in Python — but have you tackled squares? In this article we’ll write some code to display another classic shape in your console, with a twist. Instead of your everyday boring square, we’re going to spice our shapes up with exciting patterns.

Open up a browser and navigate to www.repl.it/languages/python3.

On your left you’ll see your editor, where you write your code. On your right is your console, which displays the result of the code.

Before we dive into the exciting stuff, we need to nail the basic square. Imagine your square as a grid with an equal number of rows and columns, where each box contains its own little star.

To output this we’re going to use a nested for loop, which is a fancy way of saying “a for loop inside a for loop”. There are easier ways to print a square — like printing an entire row at once, instead of one star at a time — but the double loop comes in handy for the decoration phase. Let’s start with the inner loop:

If you run the code by clicking the green “run” button at the top of the Repl.it screen, you’ll see a single row of stars. Essentially, our simple “print” operation is repeated seven times in the loop, one for each column in the first row. In Python, print statements automatically add a “newline character”. Since we want our stars to be next to each other, and not on different lines, we need specify that our end character is a space. We only add the newline character once the entire row is printed!

If we want seven rows, then we need to repeat that whole block of code seven times — using another for loop! Simply pop your three lines of code under a new loop, and you’re good to go.

Onto the second task: making our square hollow.

In this exercise, you don’t want to print every star in the grid. You only want stars in the first row, last row, first column and last column; otherwise, you print a space. Since we’re adding a condition to our program, we need to add an if statement.

Programming has a couple odd quirks. When you’re counting, for example, you typically start at 0 instead of 1, which means our columns are labelled 0-6 instead of 1-7. The first row is Row 0, and the last row is Row 6.

Remember to use the double equals (==) when comparing numbers!

Finally — how can we make a checkerboard?

Building fancier patterns is all about deciding where to print stars and where to print spaces. Technically, you could “hard code” everything, and list the exact row & column number of every star you want to print. This is long, boring, and it’s easy to make mistakes. Plus, if you want to make your square bigger or smaller, you’ll have to edit all that code.

In some situations it’s impossible to avoid hard coding, but in most cases, you can save yourself a headache but thinking up a clever solution. What is the shortest, simplest way to describe the pattern of a checkerboard? Draw a quick sketch and pay attention to the column and row numbers. (And don’t forget to start your labels at zero!)

So we can write the code for the checkerboard like this:

The types of patterns you can create are limitless! What about a giant ‘X’? Or a diamond pattern? Have fun playing around with your if statements and seeing what pictures you can create. Remember to avoid hard coding wherever possible!