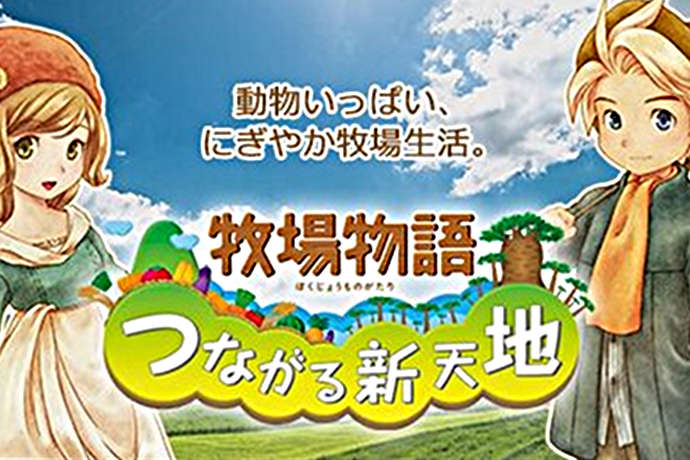 A little background before we begin: I've played and loved the Harvest Moon game series since I was nine, when I got the first game as a bribe for going on a week long family road trip. Harvest Moon is a farming and life simulation game for Nintendo consoles. It is a Japanese game, produced by Marvelous Entertainment AQL. In the US, the game is usually translated into English by Natsume, though this latest game will be translated by a different company under the name Story of Seasons. In Japan, the game is called Harvest Moon: Connect to a New World.

Japanese games usually take around a year or so to make it from Japan to the US in English translation. I've always been interested in Japanese culture and language, and I've been toying with the idea of teaching myself Japanese for years. Instead of waiting for the game to be translated into English, I decided to buy a Japanese 3DS console and the game in Japanese. I bought my Japanese textbooks on recommendations of several people from the subreddit, /r/learnjapanese. The 3DS console and game I bought from www.nippon-yasan.com.

I started the Story of Seasons game before I even mastered the first of the Japanese scripts, hiragana. In Japanese, there are four scripts: hiragana, katakana, kanji, and romaji. Hiragana is based off traditional Japanese written language and consists of basic sounds and words. Katakana is very similar, except it is used for foreign words. All Japanese language can be found in the elementary hana (hiragana and katakana) group. Kanji is adapted Chinese characters that compose a lot of words and grammar. The final script, romaji, is Romanized words — that is, words written in the Roman alphabet. While one could live off romaji alone, it is not recommended, as it doesn't quite capture how Japanese is supposed to work. The three main scripts — hiragana, katakana, and kanji — are used together to create a unique and rich language full of depth and wonder.

When I started the Story of Seasons game, I used Google Translate to translate the game's wiki guide. Eventually, however, I learned what certain kanji and hana meant simply by playing and examining the context. I was soon able to barely grasp the language, and therefore, play the game.

My playing experience was sporadic at best, due to schooling. Each time I played, however, I knew more and more words, even if I didn't know the exact English equivalent. The moral of this story is, if you want to do something crazy and possibly stupid, do it. There's nothing more satisfying than diving in headfirst and finding it's worth it.

I am still trying to teach myself Japanese. Many resources can be found on Reddit. This game isn't the most hardcore of all video games, but I feel like I have really learned something because of my attempts to play the game and learn enough Japanese. Plus I had a lot of fun playing the latest version of my favorite game. I hope that all of you decide to do something equally crazy and unusual, so that you might learn what it means to really live.