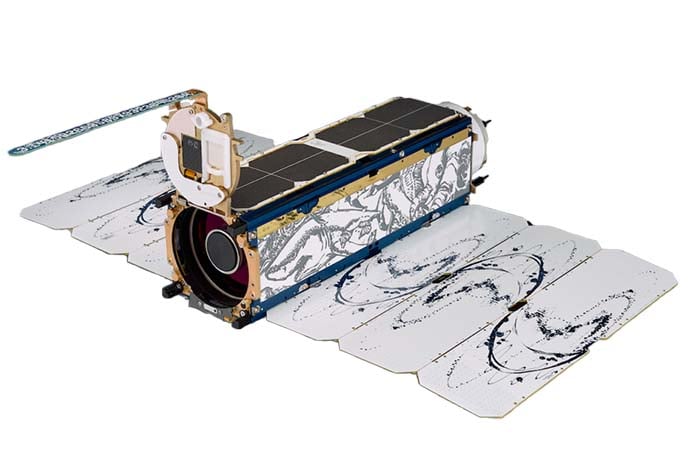 Take a look at the two images below:

Can you find any differences between them?

From space, the differences seem subtle, however up close they represent major changes to the land and people nearby. In this case, the changes were used to detect the construction of illegal gold mines in Tambopata National Reserve, Peru. As a result, the reserve was protected and the local town’s water supply was saved from mercury poisoning. This is one of thousands problems that Planet Labs sets out to identify with its “miniature” satellites.

Planet Labs is able to take a picture of nearly every place on earth, nearly every day. That seems almost impossible, like a chaotic tangle of thousands of cameras circling above. However, Planet takes an organized approach to imaging the earth. Their satellites follow a suncincronus orbit, traveling one after the other in a line circling the planet. If the earth were stationary the satellites would only be able to capture the same strip of land and sea every day. However, the earth rotates below this line of satellites, so as they follow the same orbit, the ground below them changes! Since Planet’s satellites are small and relatively cheap, they are able to build and launch them much faster than most space agencies. In fact they have the largest fleet of satellites in the world, currently 150 in total!

Helping to Improve the World

With so many satellites, Planet Labs is able to detect changes all over the world. Take a look at these two images of the Amazon Rain Forest, taken approximately two weeks apart:

Or even a comparison of agricultural practices in Turkey and bordering Syria.

Once we identify changes to the environment, we can send people in to investigate and work to both prevent further damage and to educate people on best practices.

It is not easy to design, manufacture, and launch satellites that constantly collect data in the form of imagery. The technical aspects of the work include optical engineering, electrical engineering, and software engineering. Those who have training and education in one of these fields must be able to work collaboratively with others with different backgrounds to design and build the final product.

In addition to the technical aspects of satellites, Planet Labs believes that artists bring a unique and welcome perspective to both the design and aesthetics of satellites. As such, they hire artists to add inspiration and beauty to the satellites, as well as to keep fresh ideas flowing in the workplace. Each satellite includes artwork on the body and wings, giving Planet Labs claim to the largest art collection in space!

Interested in learning more about the images that Planet Labs’ satellites capture everyday? Or maybe you’d like to see more amazing images of our ever-changing planet? Take a look at https://www.planet.com/, or navigate to Planet Labs’ blog at https://medium.com/planet-stories. You’ll find that with images, code, and the stories behind them both, we are able to see our world in a whole new light!