But not all randomness is created equal. When we think of “random” we usually mean uniformly random, where every outcome is equally likely.

If you put the following code into the p5js.org editor you’ll see a visualization of how jagged true randomness can be:

Here we’ve let the y-axis be a random number between 0 and 400 and you can see that there’s just jaggedness, no connection at all between the numbers, which is how it should be!

But what if you want a melody that smoothly climbs then falls again, or terrain that has smooth climbs to its highest peaks rather than sudden cliffs? Then uniform randomness doesn’t actually help. Instead, you need something that’s random but smooth. That’s what “Perlin noise” is! It’s an algorithm invented by an early computer graphics pioneer named Ken Perlin that is random in certain spots and then creates a smooth curve between those random points. It’s not a terribly complicated algorithm, but it’s slightly more than we can cover in this article, which is why all our examples are using P5.js since it has a built-in implementation of Perlin noise in its noise function.

So here’s a similar visualization with the noise function:

It might look a little less jagged, but go ahead and change the zoom variable to 10 or 100 or even 1000 and suddenly it looks a lot smoother than it did before, unlike the truly random version. Unlike random we have to give noise arguments to represent the point in space and/or time you’re at. It makes sense that you’d need this in order to get the smoothness!

Perlin noise with a zoom of 1 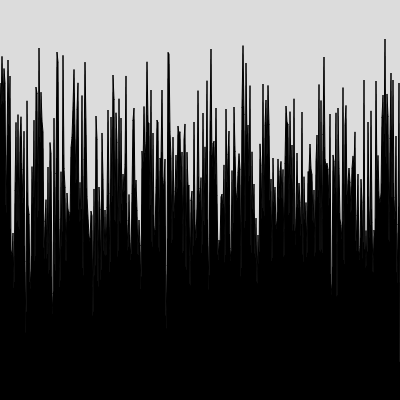 Perlin noise with a zoom of 100 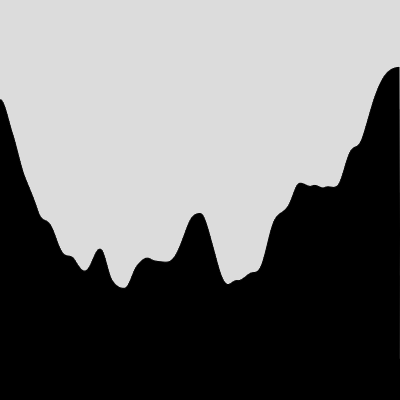 Now that we’ve shown that the noise is smooth let’s come up with some fun examples with it:

Here’s one where we use noise with an x and a y argument in order to create smooth terrain:

The basic idea is that we let the result of the noise function represent elevation, we set all pixels below a certain “elevation” to a blue color that represents water, and then above that level let all the pixels be grey and transitioning to white the higher they are.

There’s a lot more you can do with noise like create fire or smoke effects, or even use it in things like music!

If you go to estuary.mcmaster.ca, click solo mode, and type s "arpy(7,8)" # n (range 0 8 perlin) into a miniTidal window like this

Then hit the play button you’ll hear a simple little melody that is both random and yet noodles up and down in time smoothly. This is a toy example but I’ve actually used a more complicated version of this trick to create computer generated melodies for lo-fi piano purposes!

No matter what kind of generative art you want to make, odds are pretty good you’ll be using Perlin noise at some point!

What is Perlin Noise?

A Chat with Professor Ken Perlin

Collection of the Learn More links from all of the August 2022 stories, in one place.