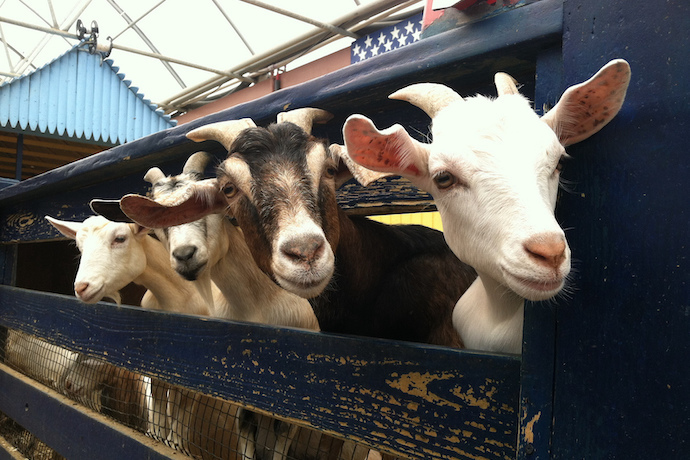 For decades, “Let’s Make a Deal” was a popular TV game show. The rules were simple: there are three doors, one that hides a prize, and two that conceal “zonks” (joke prizes). Contestants either went home with the flashy sports car of their dreams, or, if they were less lucky, maybe an old toaster or a goat!

Imagine that you’re the contestant picked from the audience. To begin, the host Monty Hall asks you to randomly pick one of the three doors, each with an equal chance of being your ticket to the big prize. Let’s say you pick door #1.

Unlike you, Monty Hall knows where the car is hidden. He walks over to the two unpicked doors and opens #2 to reveal a zonk. The audience gasps! Now Monty gives you another choice: do you like the door you’ve chosen, or would you like to switch to door #3?

What should you do? Since we’ve eliminated door #2, there’s an even 50%-50% chance between the two remaining possibilities. Stay or switch? For years, contestants have agonized over a choice with no obvious right answer.

To figure out the best strategy for the Monty Hall problem, we need to learn a few basic rules of statistics.

Let’s say you toss a coin; that’s an event. There are two possible outcomes: heads or tails. In this case, each of them are equally likely.

If heads and tails are the only two possible results of a coin toss, then the probability of getting heads — P(H) — must be 50% and the probability of getting tails — P(T) — must also be 50%. If you add more possible outcomes to the mix (for example, the coin might accidentally be dropped and get lost before you can read the result) then you have to lower other probabilities so that the total sum remains 100%. For example:

It seems obvious — what does a -10% chance of rain even mean? — but it’s better to mention this rule explicitly. A sneaky person might try to use negative probabilities to fit more outcomes into an event. Not on our watch!

RULE #3: THE LAW OF LARGE NUMBERS

What does a “50% chance of winning” actually mean?

In other words, probability and statistics are accurate over long periods of time. A 50-50 chance doesn’t mean you’ll get one heads followed by one tails. You might get 5 heads in a row, or 10, or even 100! A high probability doesn’t guarantee a specific outcome for a single event. They might, however, be a clue that it’s not smart to bet on something.

Going back to the Monty Hall problem, the answer is that you should always switch doors.

When Monty opens Door #2 to reveal a zonk, the probability doesn’t rebalance itself into 50% for Door #1 and 50% for Door #3. Whys should it? Instead, take the previous statement and remove the words “either Door #2 or” from the sentence. What does it say now?

When Door #2 was eliminated, the cloud of probability hovering over Doors #2 and #3 “pools” into Door #3. Switching doors makes you twice as likely to win!

The idea of “pooling” becomes a little bit clearer if you imagine there are 100 doors, with 99 zonks and 1 sports car. You pick door #1, which has a very small probability of winning, and then Monty opens 98 doors to reveal 98 zonks. Does it feel “luckier” to switch to Door #100?

Don’t throw a party just yet, though! Remember, a higher probability isn’t a guarantee of winning. If you played “Let’s Make a Deal” 10,000 times with your math-savvy strategy, you could expect to win 6667 cars and 3333 zonks. But if all you have is one shot, the dice might still not fall in your favour. Sometimes the law of large numbers is just a bummer.

What the Monty Hall problem illustrates best of all is that it’s important to think twice about our first assumptions — especially in math!

Introduction to probability from Khan Academy