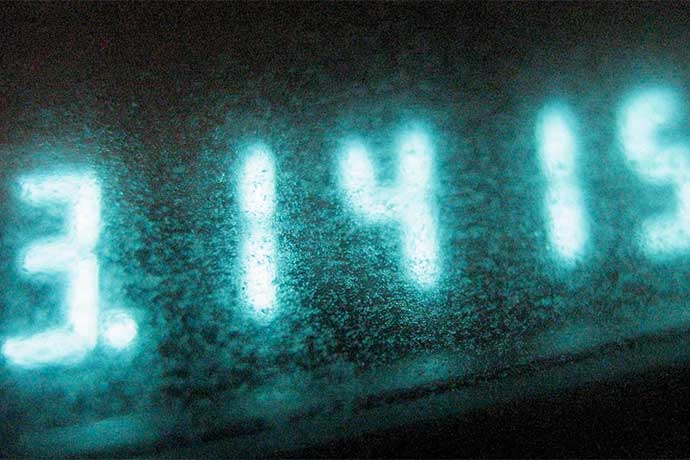 This issue is about the essence of computing, the binary numbers 0 and 1, where they came from and how they combine to create computing hardware and software. Here's a cautionary tale about getting kicked out of our digital world, by accident.

With smart phones, tablets, Playstation Vita, Ouya, Apple TV, Chromecast, Netflix, and internet-ready TVs, in addition to our desktop computers, it's impossible to remember a world without binary numbers and computing. Recently, I was slammed back into the old Dark Ages world, a life without personal computing.

However, unlike articles I've read headlined, "I lived a month without technology and survived!" I did not plan to throw myself out of our technology Garden of Eden. I was tossed out, by my own cluelessness, with no warning. No time to plan, no time to set expectations. It was binary, one moment connected all the time, the next moment disconnected completely.

I often commute into New York City to work, taking the Long Island Railroad and then the subway to an office. To pass the train time, I bought a Chromebook to help me write this magazine. But I'm also cheap. Instead of paying Sprint yet another $20 a month for wi-fi on my Chromebook, I use my iPhone to do research and fact check product and place names as I write. Which means my phone often is by my side on the empty seat next to me.

You can guess the rest of the story.

After months of this routine, and one close call where a stranger called out, "who left their phone?" I finally left my phone behind as I walked off a train to catch the subway. That was a Tuesday morning.

When I realized the problem, I used a desk phone (landlines, remember those?) to call the house to ask my teenage son to brick my iPhone with the Find my iPhone app that erases the hard drive of any phone with the app. I had an 8-digit PIN on the phone (you should consider it, too, for this reason). But I didn't want the risk of someone hacking into my phone. My son knew what to do because we've used the Find my iPhone app to prank each other: I'll ping his phone to wake him up or remind him of my existence while he pings me merely to annoy me.

Well, here's the funny part. Teenage kids don't get up until noon in the summer, not if they have a day off. If you call the house phone 10 times in a row, at 8:40 a.m., they still don't get up. Even more amusing, I didn't have their cell phone numbers. Why not? Their numbers were in my phone, of course. There was no need for a paper copy of their numbers. Until I lost my phone.

The next few phone-less days went by in rather educational fashion. Turns out I'm addicted to it. My phone is my watch, alarm clock, my reading material (or a card game) as I fall asleep, a way to find planets and constellations in the night sky, a TV guide, my stereo to listen to when I spend hours writing, and several other things. Oh, and a phone where people can reach me and I can reach them. None of this was possible without my phone. I had to live in a non-digital, non-binary, personal space. I even violated my iron rule not to mix my personal life with my client work and used their computer to look up my webmail a couple times a day.

The best thing I did happened immediately. I told myself not to worry, to relax, to adapt and see what happened. It helped that, as a teenager, I experimented with simple living, stuff like sleeping on a mattress on the bedroom floor. And I love camping. I am still into Gestalt dream analysis. No digits? No problem.

My wife was slightly less unperturbed. She grilled me: Did I have a PIN lock? Did I call the police? Had I tracked the phone? She also sent me a link to a Wall Street Journal story about people losing phones. She suggested, helpfully, I keep my next phone in my work bag, not my pockets. Several people asked if I had the ability to track my phone. However, I could not track the phone after I set the phone to erase itself. I visited the LIRR ticket desk at Atlantic Terminal twice to learn they had not seen my phone. No one had turned it in.

I even researched my next phone and put a Google Nexus 4 in an online shopping cart, ready to buy. But I waited because Google couldn't tell me on the phone if the Nexus 4 worked with Sprint, despite the product page bragging the phone works with over 200 phone companies, and two different people at Sprint gave me the opposite answer. A bright tech savvy Sprint rep described the reasons the Nexus 4 phone would work with the Sprint network, referring me to a page on Wikipedia for phone standards. A second Sprint rep reading from a script who spoke stilted English from somewhere east of Germany said, no, only phones sold by Sprint would work and would I like to buy a phone from Sprint?

Like I said, hilarious. I even had a great tech guy at a Sprint store off Wall Street, after listening to my questions about the Nexus 4, ask me, "What? You don't like Sprint? Is that the problem?" By the way, the Sprint store answer was no, the Nexus 4 would not work on the Sprint network. So from Sprint two no's and one yes and one "I don't know" from a Google Play sales rep.

On Friday, four days after losing the phone, I took the subway up to Penn Station to find the Long Island Railroad Lost and Found office. The drill is simple. When you lose your phone on their railroad, you fill out a form online then wait 5-7 days or stop by around the same time.

Finding the LIRR Lost and Found was rather like finding Harry Potter living under the stairs. I had to go to the information desk at Penn Station. They pointed me to where I had moments before walked past a blank wall. Now there was a well-lit glass door. Spooky. The Lost and Found is in plain sight but everybody walks past their door under the second and final stairs down to the LIRR lobby where you catch trains. Even better, once you walk into the Lost and Found, the small lobby faces a heavily secured door and counter. You speak to the staff through thick glass. The small over lit room feels like a portal for time travel.

Happily, my iPhone was the only one in a red case, an Otterbox with Canada printed in white script on the back. Someone had turned my phone in the morning I lost it. When the LIRR guy powered up my phone, the phone connected to the internet, rebooted, and erased itself. Figures. But I was happy to have a huge digital piece of my life back. It took me a few hours to rebuild my phone to its old state, thanks to iCloud and other apps. But I look at the phone differently now. I try not to pull it out as much.

When I stand up to leave the train, now I check my phone is in my pocket. And I have a piece of paper in my wallet with the phone numbers for my wife and our two kids.

If you have a smartphone and use it often, I recommend writing down your important phone numbers and putting them in a wallet or purse, in case you lose your phone. It’s also a good idea to put your phone aside, deliberately, and get off the device for an hour or more. See what else exists in this non-digital, non-binary world, like people.