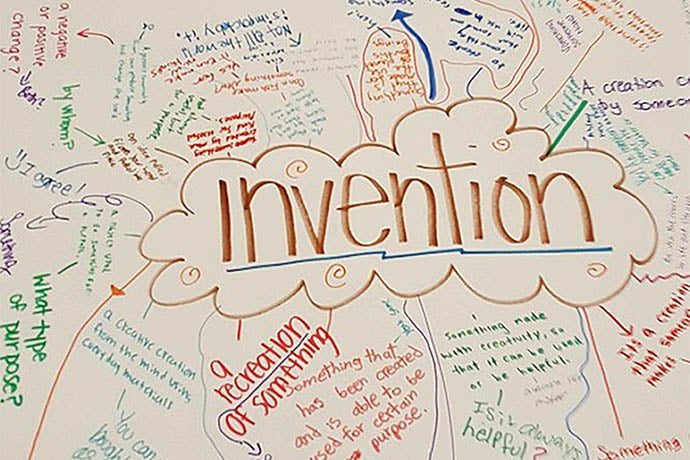 Invention literacy is the ability to read and write human made stuff, from toasters to apps. People think inventors perform magic, but invention is no more magical than reading and writing a sentence. There is a grammar to inventing from mechanical tools, to design thinking, coding, and beyond. There is a literature of inventions, from bicycles to televisions, all around us to draw inspiration from. Just as Thoreau read Emerson’s writings, so too did Edison read Tesla’s inventions. The functional pieces of inventions: transistors, bent sheets of aluminum, a “for loop” in software, these are like a large alphabet. As one learns to “sound out the words” of inventing, one begins to see a product not as a “black box” but as a collection of comprehensible pieces which come together to make up a blender, a pair of Nikes, or a ferris wheel. The Adventures of Huckleberry Finn would be incomprehensible to someone who doesn’t know the rules of reading English.

Beyond understanding, emotion plays a role too. Words are actually scary to illiterate people. We have to stop thinking of inventions as some unknown future phantoms to be conjured by alchemy. Inventions, from a clay pot to an iPhone, are simply the human-made part of the world that we live in.

Not everyone will be a professional writer, but everyone needs to learn to read a menu and write a text message. Likewise people should graduate understanding how things are made and how to build their own ideas, at least at the proficiency equivalent to writing a 5 paragraph essay. Right now we have single digit invention literacy percentage, and we have an accompanying fear of “how things work.” Invention literacy is a hidden literacy, and I’d like to uncover it. It’s the true 21st century literacy as human innovation speeds up approaching a crescendo of nearly instantaneous innovation (at least through the lens of last century).

Humans have brought more than just tech gear into this world. Humans have created drugs, wars, religions, economies, and governments. We don’t have to accept agriculture industries, schools, or banking systems the way they were offered to us. If it can be created by a human, then it can be recreated by you, me, and all of us. But only if we all believe in ourselves as inventors (and re-inventors).

So let’s offer everyone the opportunity to learn the basic alphabet, vocabulary, and grammar of inventing. As people learn to read and write the world they live in, they gain a special empowerment that I call creative confidence. When we reach 95% invention literacy, we won’t be able to believe that in 2016 only special people?—?similar to the scribes of ancient Egypt?—?were engaged in reading and writing inventions. The result is that we will live closer to a world made by us all, and what a beautifully diverse mosaic that will be!

A librarian in Texas, Colleen Graves, gave the Invention Literacy essay above to a group of 13-year-olds in a public school to see what they would have to say. All of their written reactions are documented below, kind of like “Medium on paper IRL.”

Here are some interesting points the middle-schoolers brought up: 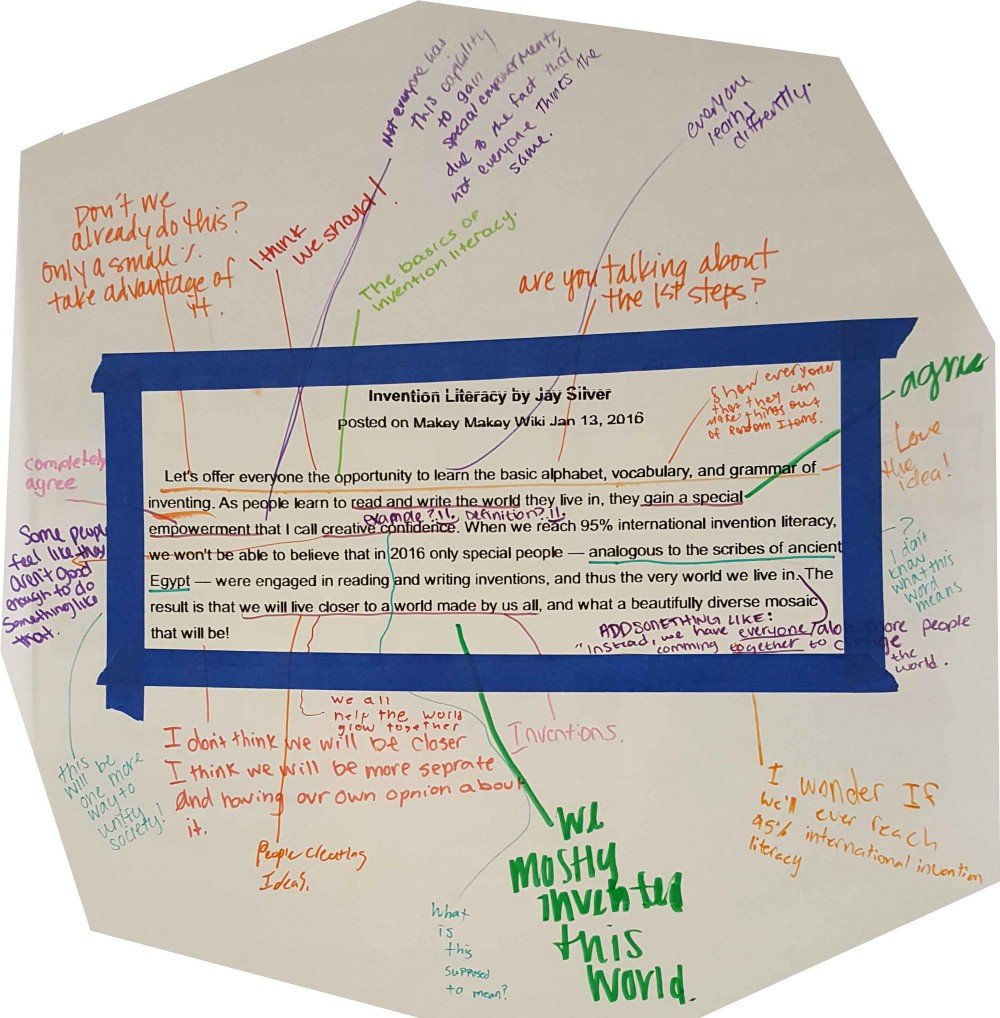 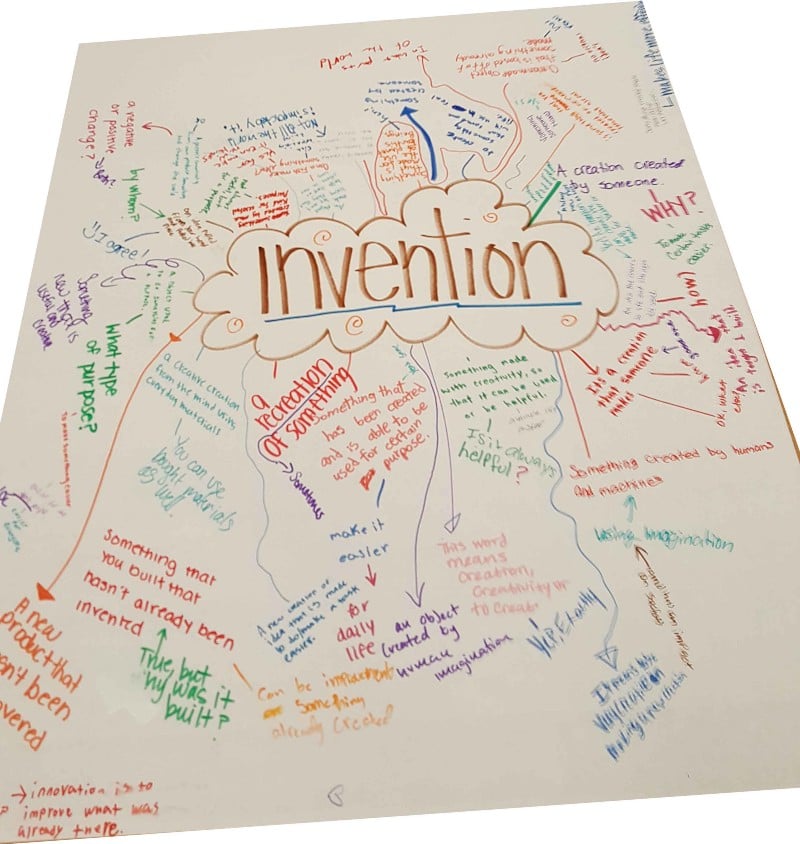 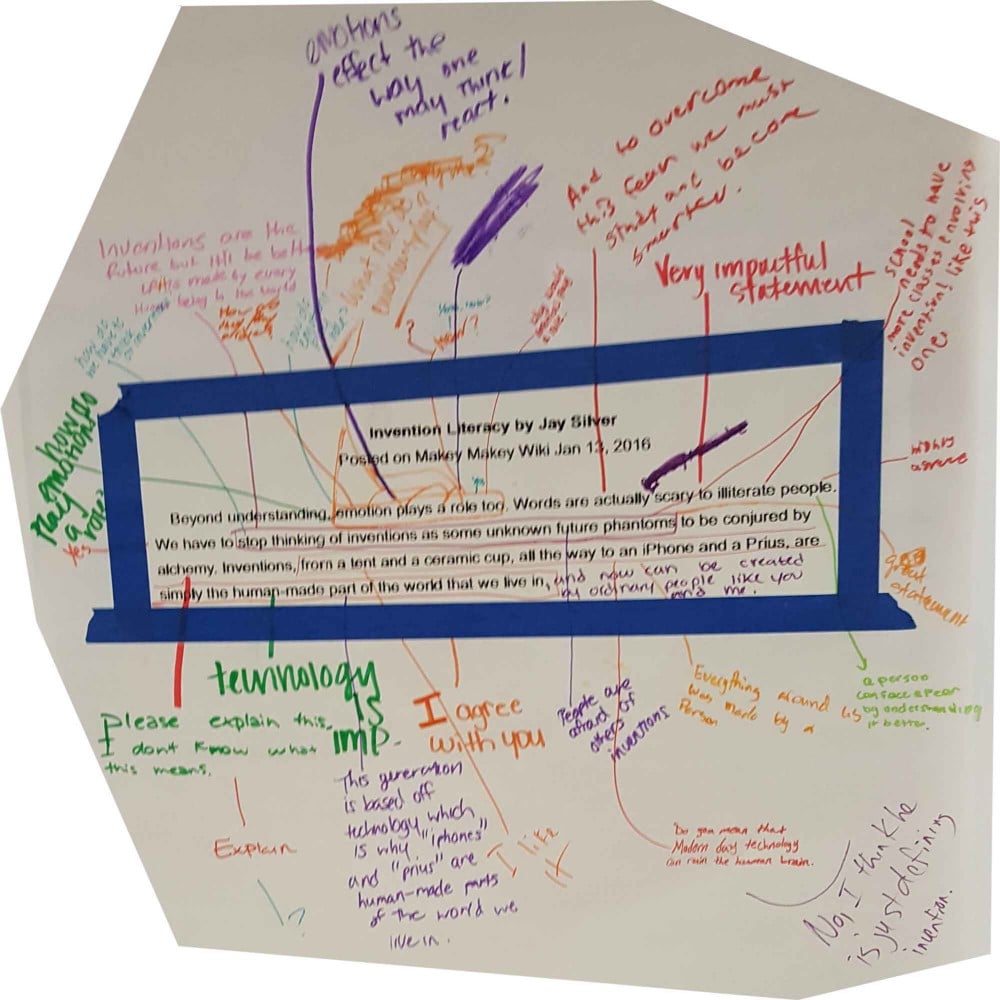 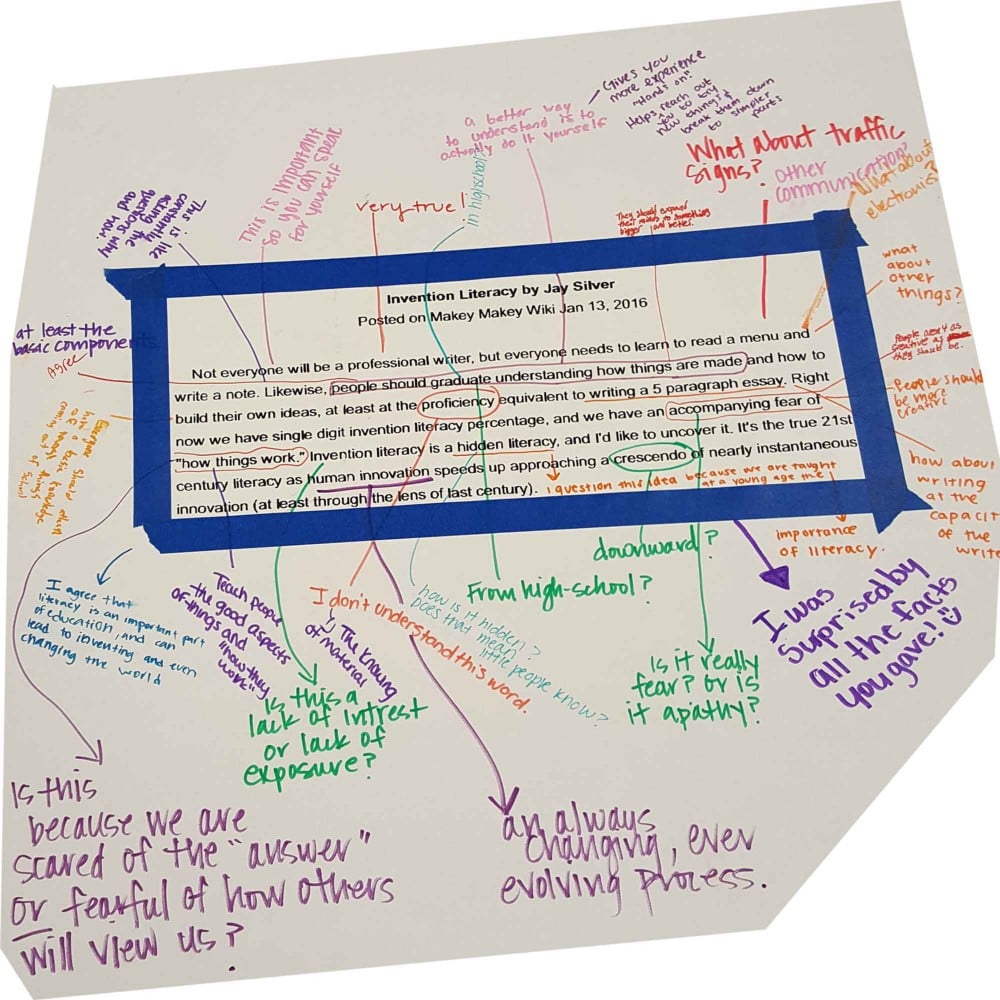 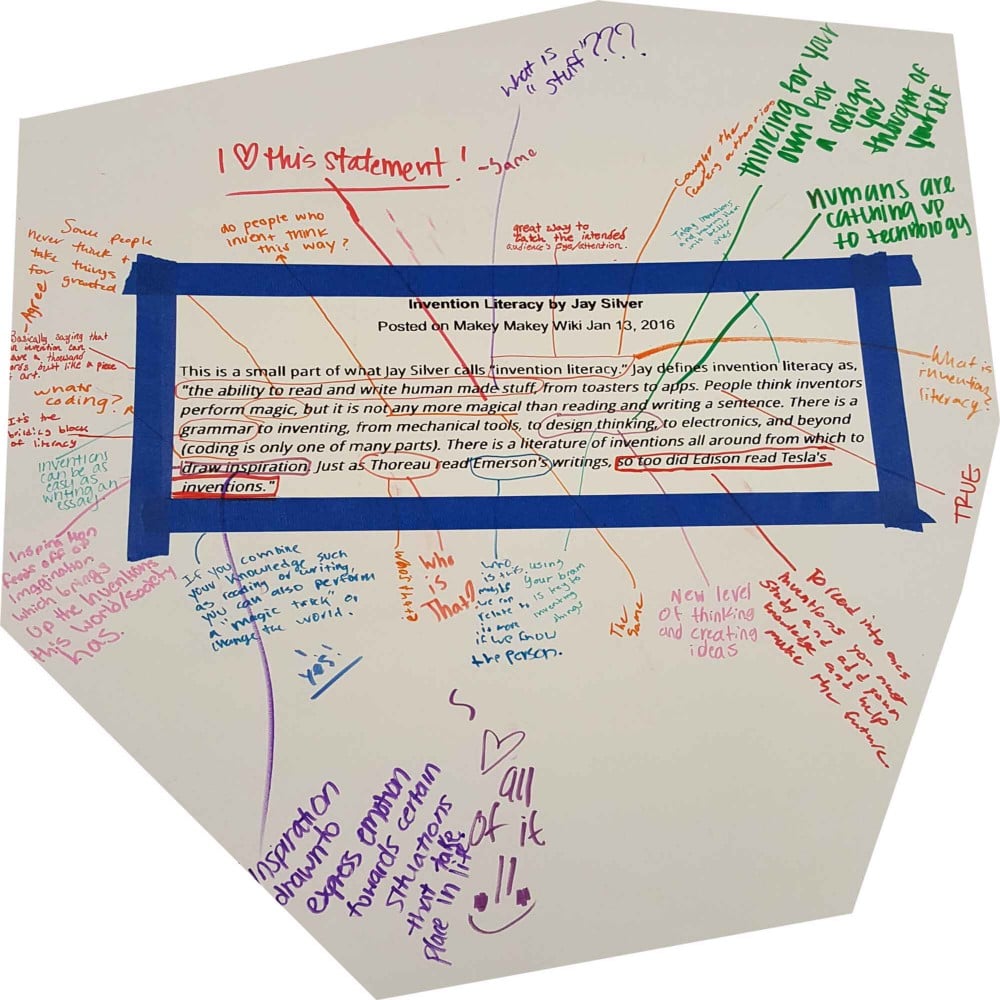 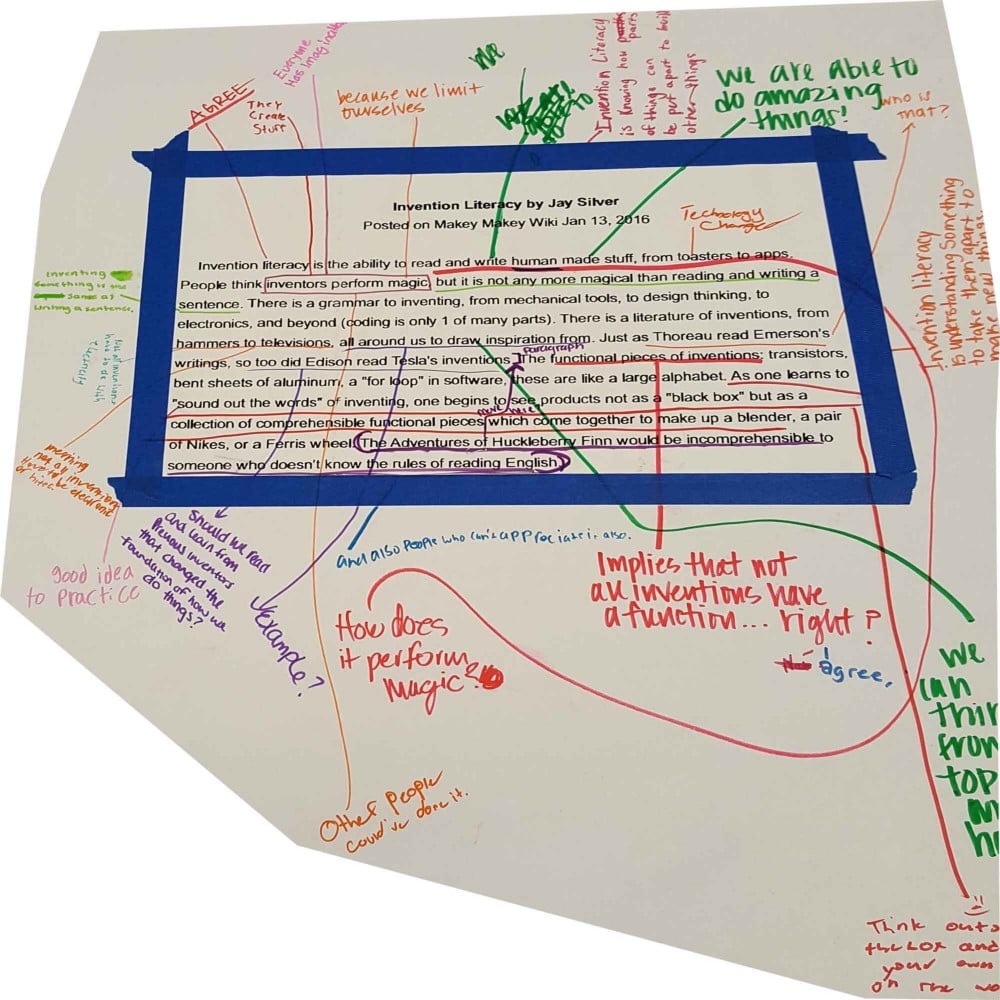 First: An ordinary pencil turned computational by thumbtacking a circuit into the graphite “wire” running through the middle. Second: A musical straw invented by a freshman in a workshop I ran in Boston. Third: A sink turned turned into a Theremin by sending electrons through the metal & flowing water. Summary: All these examples use the Drawdio circuit, which I invented specifically to teach Invention Literacy.

I have been working on the idea that “The World is a Construction Kit” for years, and one question that comes up is, “What type of literacy gets someone to see the world as re-form’able?” It is some type of a fluency with reshaping the way the world works. I want to catalyze a viewpoint of freedom. I was heavily influenced by Mitch Resnick’s and others’ idea of coding as a literacy. Ultimately if people can form their own world-view and their own self-view, then I am satisfied, so in that light: what type of fluency do we need???

Thanks to Amos Blanton.

This essay first appeared on Medium and is reprinted with Jay’s permission.

The Maker Movement is about Making Meaning Medium

The Maker Movement is Not about 3D Printers El Pais

The Future of Education Demands More Questions, not Answers Edsurge