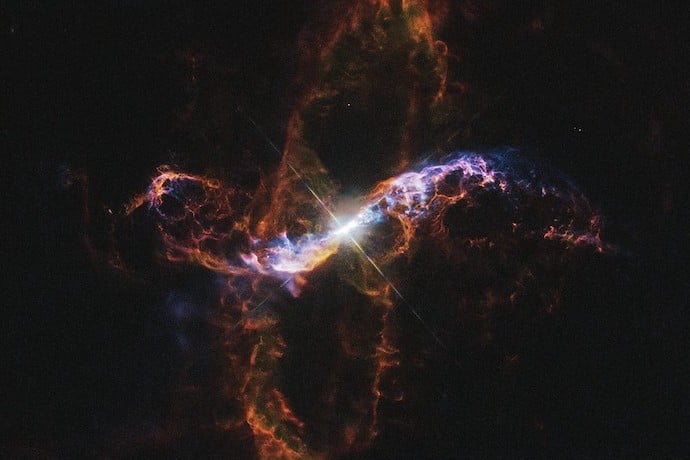 What could have started life on Earth?

It’s a broad question. Much broader than most scientists choose when presenting a poster at the 30,000 person American Geophysical Union meeting in San Francisco on December 10th.

And to be fair, it wasn’t exactly what Grant Mitchell was asking. Specifically he and his colleagues presented a poster titled: “Assessing the Solar Neutron and Gamma-ray Contribution to Early Earth’s Atmospheric Ingredients of Life”

Which boils down to, what could have started Earth on the path to being warm enough to support liquid water, or maybe: Could eruptions off of a young sun have provided enough energy to start life on Earth without gamma rays?

Gamma rays are a kind of light and this is what Mitchell has been studying for a long time. For this project, he wanted to know what happened to ancient Earth when gamma rays arrived from the Sun. To answer the question he needed to learn computer modeling. He needed a computer to create an ancient world so he could see the effects of these particles on the atmosphere. And to have a useful model, he needed to learn as much as he could about how the Earth started. He studied data from other planets so that the information he put in the model was as good as he could get it.

Most of the time, Mitchell studies neutral particles — they have no electrical charge — such as gamma rays. Gamma rays have more energy than their well-known cousins X-rays, but the two light particles are similar. Both can go right through things that we see as solid. And they don’t interact — very much — with the things they go through.

This is different from charged particles. Charged particles, in this case, are made from the sun pulling apart a molecule of hydrogen or helium. These former molecules interact with everything they come near. Many people assumed the energy from the early Sun came mostly in the form of charged particles.

Mitchell works in the laboratory of Georgia De Nolfo, a physicist at Goddard Space Flight Center. De Nolfo studies radiation as well as neutral particles in the area between Earth and the Sun. Mitchell is also working on his Ph.D in physics at George Washington University.

The lab is set up to look at present day particle events, so looking at the beginnings of life on Earth is a detour. But Mitchell wanted to put the time in because, he said, “You can’t get any more basic than this,”

That was where Mitchell and his team came in. They started with the known scenario.

When our planet was young, it was enveloped by gases, including nitrogen and oxygen. Those gases would have stayed dormant but something happened.
The Sun was young then too. A young star sends off much more energy than an older, more mature star. Scientists know this because of the observations from the Kepler Telescope. Kepler looks at many stars, some old, some young. And young stars that are similar to our Sun send off as many as 10 flares a day.

The energy from these solar eruptions is huge. Scientists have measured the energy by looking at tree-ring data that corresponds with known solar flares from our Sun.

Obviously if there were tree rings to look at, life on Earth had already been established. But the team used that data to extrapolate back. They assumed that if the Sun sent off that kind of energy now, it sent of at least that much energy when it was a young star.

So Mitchell and his colleagues used a simple computer model of a young planet and its gasses.

With the behaviors of different energy particles ready, Mitchell had the model bombarded the fictitious planet. Solar flare after solar flare hit the atmosphere of inert gases.

According to the model, the high-energy charged particles impact the upper atmosphere. But Mitchell and his team know that the gamma rays keep travelling. They don’t get to the surface, but do get further into the gaseous mixture. And they still had enough energy to have some effect.

Which means it could have been the gamma rays that were responsible for the first steps in life. Their energy changed nitrogen and oxygen gases into the greenhouse gas nitrous oxide (laughing gas). And that set Earth on the path to being a planet warm enough to support liquid water.

Mitchell said the next steps are to use a more sophisticated model and collect more information from scientists who study planets. This isn’t his day job or his dissertation. But, still, he said, the beginning of life on Earth “is a fun side project.”

The earth in gamma rays

What are gamma rays?

Amy writes about science for kids, for adults, for cats, for anyone who will listen. She has more than 25 books out, including the award-winning Fire Bird: The Kirtland’s Warbler Story (Arbutus Press, 2017) and Bugs and Bugsicles: Insects in the Winter (Boyds Mills Press 2010). Amy lives in Maryland along with her husband, two sons, two cats (who really don’t listen very well) and her dog.