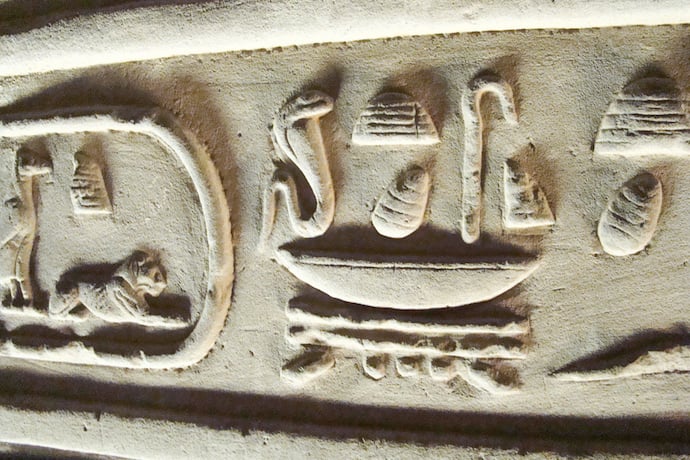 Institute for the Study of the Ancient World

We’ve covered a lot of codes and ciphers in the past, but none of them match the age of one of the more fascinating languages ever made; the Egyptian hieroglyphs. Created by a civilisation thousands of years ago, hieroglyphs can still be seen today adorning tablets and structures all around Egypt’s historical sites.

It’s very important to realise the Egyptians didn’t write in hieroglyphs to confuse other people! It was their base alphabet, very much like our own ABCs. The problem was, they didn’t use letters like we did; instead, they communicated via small pictures, not too unlike the emoji we use today. Historians couldn’t crack this mysterious pictures for quite some time, making it a kind of code in spirit!

For a very long time, it was hard to decipher what hieroglyphs were. People didn’t know if the symbols were words, or letters, or if each one had a special, individual meaning. Progress didnt get very far, until a soldier in Napoleon Bonaparte’s army discovered a stone in the town of Rosetta in 1799.

This stone had writing on it in three languages; hieroglyphs, Demotic (an ancient Egyptian script), and Ancient Greek. Scholars couldn’t crack what the first two languages were, but Ancient Greek was well-known and could be translated. The idea was, if this one stone had three different languages on it, it was probably saying the same thing in each passage, just in a different language. If you’ve ever been to an airport and seen signs in various languages, you’ll know of this first hand. Therefore, once the Greek was translated, they would know what the other two scripts were saying and could work backward from there.

Two men used this discovery to launch their attempts to be the first to decipher this ancient language; Thomas Young and Jean-François Champollion.

Young made some progress; he noticed the Pharaoh name “Ptolemaios” reoccuring constantly on the Rosetta stone, and could identify the hieroglyphs that would make up the name. This then tipped him off on how some hieroglyph were pronounced, and used it to translate some cartouches, which were bands with people’s names written on them in hieroglyphs. However, he came to a halt and had to give up.

Champollion continued the work Young left by trying to translate a specific cartouche. The name was four letters long, and he knew the last two letters were two S’s. The first symbol looked like a sun, and his previous knowledge of an ancient Egyptian language called Coptic meant he knew the word for sun was ‘Ra’.

If the first symbol was the sun, it would be pronounced ‘Ra’, followed by the second symbol, followed by two S’s. “Ra – s s” sounded very similar to a very famous Egyptian Pharaoh named Ramses; when Champollion realised this, he exclaimed that he had cracked the code before promptly fainting!

So what does this have to do with actual secret codes? The key is not the hieroglyphs themselves, but how they were cracked. Using the Ancient Greek portion of the Rosetta Stone, the scholars could relate the translation to the hieroglyphs and find patterns that told them how specific symbols were pronounced. This is known as ‘reverse engineering’, and it involves someone working out how something was made by seeing a result and working backward to see how it was constructed.

This is why ciphers are kept as top secret as possible. If the enemy gets their hands on the cipher’s key, deciphering messages becomes very easy; however, even finding a proper translation of a code means the enemy can make major strides in breaking the code by working backward from that point. Keep this in mind when making your own ciphers!

How the Rosetta stone helped us decipher hieroglyphs

Details on cracking the code