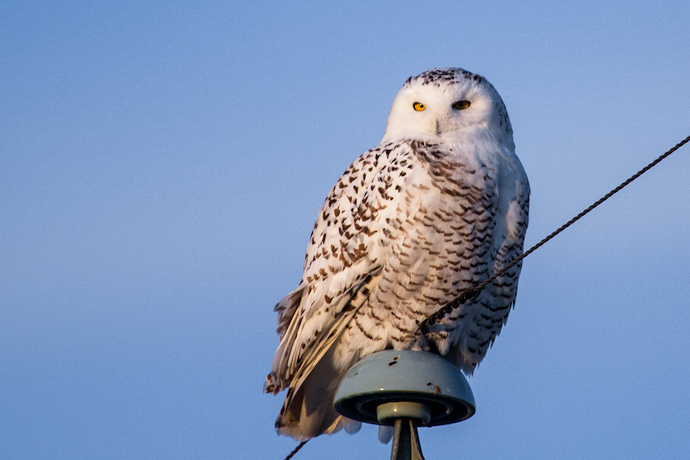 Snowy owls are beautiful and mysterious with white feathers that blend into snow. Snowy owls that fly between Canada and the United States can get a shiny small backpack if they can find Project SNOWstorm.

Project SNOWstorm tracks owls as they migrate. Their goal is to learn more about these mysterious birds, what they need to thrive, and where they migrate.

Tiny backpacks with solar powered transmitters are attached to snowy owls to track them in four dimensions — longitude (east to west), latitude (north to south), altitude, and flight speed — at intervals that can be set to any time length. Data can be stored for years if needed. When the owl migrates near a cell phone tower, data in their transmitter backpack is downloaded and any software instructions uploaded.

Until now, interactive tracking has not been possible. Birds have been tracked by satellite and VHF, or Very High Frequency, a radio standard. Project SNOWstorm uses the GSM network used for cell phones. When a snowy owl flies near a cell phone tower, data flows back and forth between the owl and the Project SNOWstorm team the same way our internet traffic flows back and forth between our phones, cell towers, and the internet.

Early in the winter in 2018, for example, Project SNOWstorm switched on the backpack carried by a young female snowy owl along the New Jersey coastline. They sent a software command to switch tracking her longitude, latitude, altitude, and flight speed from every hour to every six seconds. The snowy owl’s solar panel on the backpack, however, could not keep up with the energy demands of recording this data. So another software command was sent a week later to return to tracking the owl’s data every hour.

Software updates also can be sent to the bird’s backpack, for example, to change tracking based on where the owl flies. When owls are near the Arctic Circle, for example, where sunlight is twenty four hours, tracking can happen more frequently. And if there are no cell towers in the Arctic Circle, data is stored until the owl flies back south near a cell phone tower.