The movie Hidden Figures tells the story of three women who worked for NASA as mathematicians and helped launch John Glenn into multiple orbits around the earth, the first human to do so. While movies are stories about people, how people live their full lives can be more interesting. Dorothy Vaughan, Katherine Johnson, and Mary Jackson made contributions beyond the Glenn mission.

In fact, many women used their skills to put astronauts into space. While their work was often hidden — and was different from what society expected of women in general and African-American women in particular — these three women also were part of a centuries long history of women performing complex math computations to further science and later computing. These three women succeeded and thrived in worlds divided by skin color, gender, education, and intelligence. 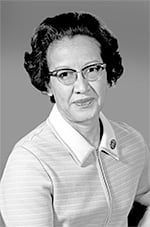 Katherine Johnson started work at Langley Memorial Laboratory in 1953, taking a job working for Dorothy Vaughan. As a bright student gifted in mathematics, she skipped several grades and, at age 13, attended high school at West Virginia State College. She enrolled in the college at 18 and graduated high honors. She taught high school then left teaching to start a family. When her daughters were grown, she found a temporary job at Langley and moved her family to Newport News, Virginia. After the job became permanent, she contributed to a number of key NASA aeronautical publications in the late 1950s into the 1960s.

From 1949 until 1958, Dorothy Vaughan served as NASA’s first African-American manager. A mathematician by training, she was hired to help process aeronautical research data after World War II. She also actively lobbied for promotions of women, regardless of their race, and was called on for complicated projects. She became a FORTRAN programmer and contributed to NASA projects, including John Glenn’s orbital flight around the earth. 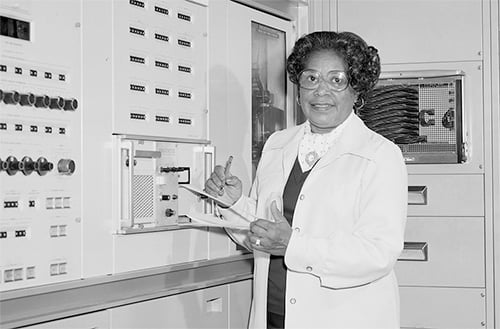 Mary Jackson in 1958 became NASA’s first black female engineer. A male colleague had encouraged her to take advanced college courses to help her be promoted from mathematician to engineer. However, she had to apply to attend segregated classes to earn her engineering degree. In 1942, she graduated with a dual degree in Math and Physical Sciences from Hampton Institute then taught math. She also worked as a receptionist, a bookkeeper, and stay at home mom. Then she worked as a secretary at the Langley Memorial Aeronautical Laboratory’s segregated computing department in 1951, reporting to Dorothy Vaughan. In 1979, she became Langley’s Federal Women’s Program Manager to help hire a generation of NASA female mathematicians, engineers, and scientists.