Those who have dabbled in drag and drop languages such as Scratch and Blockly, or even taken a couple courses in a text-based language, may have written many programs without thinking much about mathematics as we learn it in secondary school. The basic skills involve writing a step by step set of instructions that likely includes looping and conditional logic. Looping often doesn’t require much more math than the ability to count, and conditional logic doesn’t resemble much of anything most pre-college students have seen in math class.

Yet, look at the requirements for a college degree in computer science from just about any university and you’re likely to find a class called Discrete Mathematics on the list. What is this class? Why is it required for computer science (but not for almost any other major), and what can we learn about discrete math before college?

As it turns out, just about all middle school, high school, and perhaps even elementary school graduates have done a bit of discrete mathematics. It comes up in the form of basic probability questions such as those involving flipping coins, pulling socks out of drawers, and questions of this sort. However, these types of basic probability questions just scrape the surface of discrete mathematics. The content covered by most discrete math for computer science majors classes is too much to describe in one article, so we’ll start with propositional logic.

Nearly all discrete math classes offered by computer science departments include work in propositional logic. Propositional logic consists of statements that are either true or false (but not both at the same time), and the Boolean operators “and” and “or”. For example, consider the following proposition:

Dinosaurs are extinct and rhinos are not.

This proposition consists of two statements: (1) Dinosaurs are extinct. (2) Rhinos are not extinct.
In order for the whole proposition to be true, both statements must be true. However, rhinos are an endangered species and there is a reasonable chance that by 2031 they will be extinct. If that happens, then at that time the statement will be false. But wait, dinosaurs will still be extinct, so won’t part of the proposition be true and part be false? Yes, but because the operator “and” means that both conditions must be true in order for the entire statement to be true, when rhinos go extinct the proposition will be false.

Try this one: I will go to summer camp or I will stay home.

What though, does all this have to do with computer science? It turns out that propositional
logic translates into binary numbers, which in turn lead into logic circuits. For example, we can replace each statement in a proposition with a letter for short, and organize the results in a truth table.

If we want to symbolically list out under what conditions p v q (read “p or q”) is true, we can use the number 1 to indicate true, and the number 0 to indicate false. We start by listing all possible combinations of true and false for statements p and q. 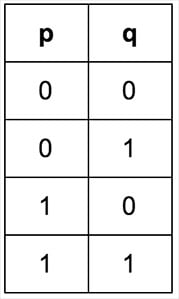 We can add a third column to the truth table to evaluate the entire proposition p v q for all four combinations of true and false. 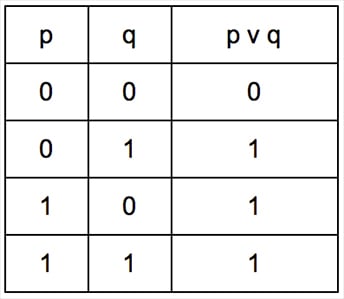 If you have ever counted in binary, you might notice a pattern going down the first two columns of the truth table above. We are actually counting from zero to three in binary! If we had a third statement in our proposition, it would translate into counting from zero through seven in binary and so on.

We can even transform the truth table into a logic circuit as shown below. A rounded triangular symbol is used in logic circuits to represent an or gate. Take a look at the simple logic circuit below. There are two inputs, p and q with values of 1 and 0 respectively.

Can you guess what the output will be? If you’re not sure, check the truth table for or when p = 1 and a q = 0, or think about the an or statement such as “I will go to summer camp or I will stay home”. In either case, when one part is true and the other is false, the result is true. Therefore, the output of this circuit is 1.

And what about our proposition involving dinosaurs and rhinos? As is, both statements are true and the corresponding logic circuit is shown on the left below. However, if rhinos do indeed become extinct, the logic circuit will change as shown on the right.

By combining multiple “and” and “or” gates, we create increasingly complex logic circuits. The circuit below has a third input. Can you figure out what the output will be?

If you said the output is 1, give yourself a pat on the back. You are well on your way to mastering a central topic in mathematics for computer scientists!

The Role of Logic in Teaching Proof