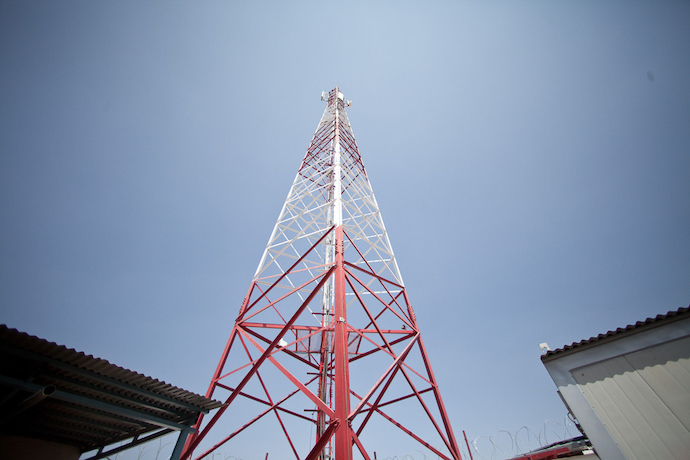 Institute for Money, Technology and Financial Inclusion on Flickr

Explore the past of cellular technology, and take a peek into its future.

Today approximately 63% of people in the world own cell phones. For many across the globe they are the primary device used to call and message others. But those of us around 30 years of age or older recall a time when all phones were landlines, connected to the walls of our kitchens and bedrooms, and messaging did not even exist. When and how did this transformation in communication take place, and how do mobile devices send and receive messages wirelessly?

The first call from a mobile phone was made in 1973, traveling through low-powered towers. Nearly 20 years later in 1992 the first text message (merry christmas) was sent through a much more developed cellular infrastructure. As cell phone technology improved and both messaging and calling from cellular phones has become increasingly popular, cell phone towers have sprung up across the globe. Without a cell tower to convert the radio waves sent by the phone into electromagnetic waves, our messages and calls would never be received.

But these towers can be something of an eyesore, creating a conflict. We all want the ability to communicate seamlessly, however many people oppose the sight of cell towers. And so comes the challenge: How can we hide the towers?

Most cell towers stand between 50-300 feet tall. In rural areas they are often constructed on hills or mountains as increased height leads to increased range. How does one hide such a conspicuous structure?

In some areas hiding the unsightly towers is easier than others. In urban and suburban areas, cell towers are sometimes built within a flagpole or the bell tower of a church. Both these structures are already present in many communities and have ample height to send and receive calls and messages from a distance. But where such structures are not already available, or the community opposes the addition of a cell tower within them, towers are sometimes designed to blend in with nature herself. Usually this is in the form of a tall tree or even cactus. Though these cell tower trees now have more natural designs than the originals built in the early 1990s, they still usually stand out as bizarre, artificial, trees. Many argue that they are no more sightly than an undisguised tower, making them an almost as unwelcome, but much more expensive, eye sores.

The way of the future

No one can be sure what the future of messaging and mobile calling holds. However we do know that the fifth generation (5G) of wireless service is scheduled to roll out in 2019 and 2020. Five G technology will bring faster service traveling through shorter wavelengths, and that service requires cell phone towers be closer to users than the towers of 4G typically are. This means we will likely see “towers” smaller in size but greater in quantity springing up around our neighborhoods. In fact they will not be towers at all, rather service providers will install antennae on existing street lights and utility poles. Sometimes these antennae will be accompanied by “boxes” on the ground that can be disguised as mailboxes. All this allows for higher frequency, faster, waves that bring us faster service.

Some predict that a decade or two after 5G wireless service is scheduled to roll out, we may start to see an even more dramatic change to the way messages are sent and received. Currently the medical industry is developing wireless devices that can be embedded in our bodies to help diagnose and cure illnesses. In theory those same devices that send and receive messages between patients and doctors could transmit messages of the sort that we send through text and internet-based messaging apps. And if that were to happen, perhaps the cell towers being built throughout our communities would become yet another relic of obsolete technology.

How Text Messages are Sent