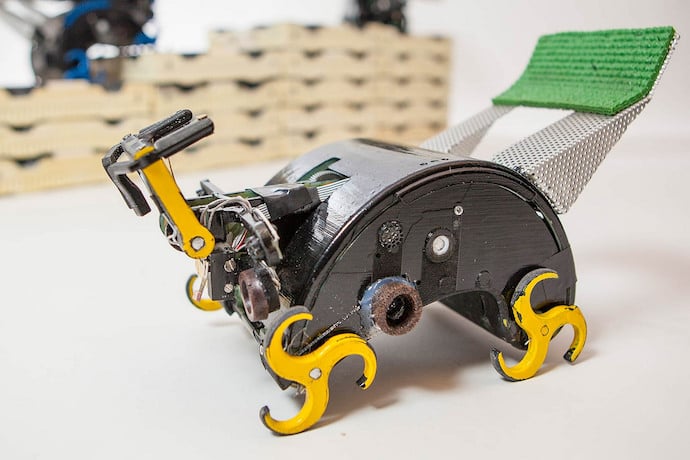 How does a mosquito fly in the rain?

And how does this question relate to robotics? As it turns out, a raindrop has about 50 times as much mass as a mosquito and travels at up to 22 miles per hour. So in some ways a mosquito getting hit by a raindrop is analogous to a person getting hit by a pickup truck. The human would not survive, but the mosquito keeps right on flying. Studying amazing feats such a mosquito flying in rain can give teams of biologists and engineers ideas for designing specialized robots inspired by remarkable feats of biology.

One such researcher, David Hu at Georgia Tech University, found that it is likely the mosquitoes’ small mass combined with its strong exoskeleton that contributes to its ability to fly safely in the rain. Engineers are applying discoveries such as these to design and build a variety of biology-inspired robots, from micro air vehicles to a nano hummingbird. Perhaps in the near future such micro robots will have applications including research and surveillance.

Snake motion is another area of biology that is inspiring robotic design. Snakes move by contracting and relaxing their muscles. By doing so, they are able to travel through sand, up trees, and through water. A robot able to navigate such a range of terrain could help perform search and rescue operations and investigate difficult-to-access locations.

The snakebot is being developed at the biorobotics lab at Carnegie Mellon University. The basic idea is to connect any number of pieces, or modules, to create a snake whose length is ideal for its intended purpose. Each module is an elastic actuator, a motor with a spring. The spring helps measure both the amount of force the robot exerts, as well as how much force is exerted upon it. Using this information, the snakebot can be programmed to respond appropriately to changes in force and pressure.

Though as of this writing the snakebot is relatively new, working prototypes were deployed in Mexico City as part of the search and rescue effort following the 2017 earthquake. The snakebot has also been tested in the pipe system at Zwentendorf nuclear power plant in Austria, where it was able to travel through narrow pipes and confined spaces that neither humans nor other robots can safely explore.

The octopus is also studied by the robotics community. Unlike most of today’s robots, the octopus has a soft body with no bones or internal skeleton. Given its unique structure, it makes use of two main modes of locomotion that are quite different from harder-bodied animals. To crawl along the ocean floor the octopus shortens and elongates its tentacles, choosing which tentacles to move in order to travel in a desired direction. When the octopus needs to speed up, it draws water into a cavity within its body and squirts it out to push it along. Although both forms of locomotion create a challenge for those in the field of biology-inspired robots, a soft-bodied robot with nearly infinite degrees of freedom for movement could open the doors to a new world of robot applications.

Scientists and engineers at Harvard’s Wyss Institute for Biologically Inspired Engineering have created an octobot with some of these characteristics. They are able to 3D print a soft-bodied octopus robot made of silicon. Even the “brains”, or circuitry, of the robot are soft. This is made possible using liquid-filled logic gates and pneumatics to control motion. Basically, small amounts liquid hydrogen peroxide undergo a chemical reaction, turning into a much larger volume of gas. The gas is then distributed into the octobots’ tentacles, inflating and deflating them something like a balloon, to control their motion. Because the robots’ movements are controlled by liquids and gases, rigid components such as batteries and circuit boards are not necessary.

A robot with a completely soft body is difficult to achieve, however its potential applications are quite remarkable. Scientists are working to perfect the current octobot to use it in both internal medicine as well as search and rescue missions, areas where more rigid bots often are not up for the job.

How do Mosquitoes Fly in the Rain?