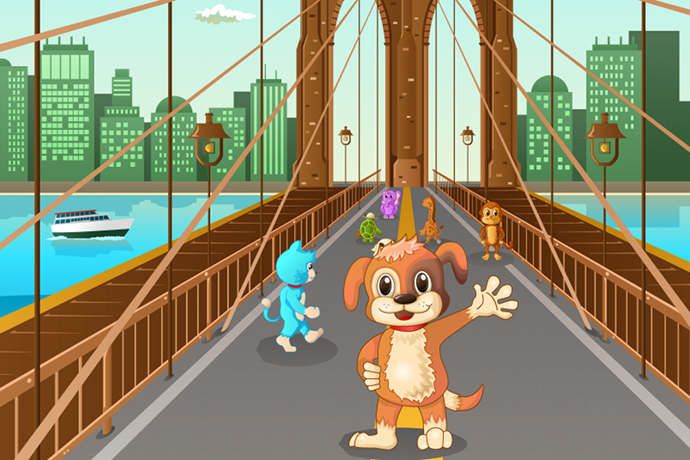 In this interview, he describes the process of creating software games for kids, from an initial idea based on the elevator riding interests of his young son to testing and tweaking games.

How did you start your game company, Glide Games?

Tim: About 4 years ago when my son was almost 4 years old, I took a special interest in mobile application development. Mostly because I was searching for a children’s game that he might like and couldn’t find exactly the right kind of game. So I decided to build it. And to do it with my son.

Where did you get the idea for your first game?

Tim: I used searching for an appropriate children’s game as an opportunity to create a game called Elevator Adventures. At the time our son thoroughly enjoyed riding building elevators. Especially really tall buildings. The more buttons to press, the better. We sat down in front of Xcode (version 4 at the time) and started to build up the story board then hook the buttons up to functions and layer in the scenes.

Over the years we’ve sold thousands of the Elevator Adventure game. It seems to be just about right for a 4 year old player.

What is the one thing you learned that was incredibly important about creating a game company and creating games for kids?

Tim: The one thing I learned about creating and publishing is that it takes longer to create a successful business than one would anticipate. It has been a learning experience to create something from nothing, ground up. Including naming, registering, making a business official. I didn’t anticipate the time and energy when I first started 4 years ago. One can easily give up, and all I could say is just keep at it. Even if only slowly.

Creating a game is very similar. Keeping the user interface (UI) simple sounds simple, but really isn’t. Until you actually put the game in the hands of a child, or build it with them, you really don’t know what the UI might come out like. It is a very iterative process. And the more kids you can allow to play it during development, the better.

One afternoon, our son placed the game out on the playground and many kids came over to it. This was the second game we designed together called Subway Adventure (Fluffy & Gem Subway Adventure). The children really enjoyed riding on the subway, and swiping their metro card. It was evident the buttons were too small on some screens and that the kids intuitively didn’t know how to transition through a couple of scenes. Or that some scenes were even available, like a Toy Store or Restaurant. It was a big help to get feedback. Knowing a new or unique user looking at the game was not part of the design process meant introducing simple hints on how to transition between game scenes and open parts of the game up.

What would you do over, if you had the time?

Tim: If I had the time, I would release a major revision of every application asking my son for new design ideas for each game at his current age. Keeping the old ones intact and just making a new release version of the game. I’d also bring my son out to some children’s application developer conferences, where they allow kids to play games and play the part of evaluator/critic.

Its nice to see the different things a young person wants in a game, and quite honestly its a way to lock that point of time as a memory when you create them.

We prefer educational games, like Marble Math, and ones that are really engaging. We dislike In App purchases for kids under a certain age. They detract from the innocence of gaming at a young age. And from using the games for educational purposes.

Don’t get me wrong, In App purchases and Paid Upgrades are important to the industry and for game developers to make a living off of their creations. It is, however, important to keep in mind the audience and age ranges you cater towards as a indie or professional developer.

I suppose if I had more time, I’d advocate for content free of ads and purchasing for certain age groups. For now, I just make it a cornerstone of our developed apps by being compliant with COPPA and such.

What is your personal and professional background? Do you play a lot of games?

Tim: My background is in Arts and Music, with my professional career in Computer Science and Cybersecurity. I don’t play as many games anymore as I used to. Computer and board games of all kinds were a part of growing up in the 1980’s. We used to play all the time when we were young. Back then it was the Commodore and Atari. We also spent a lot of time outside enjoying nice weather.

I mostly use games on mobile devices as a way to interact and engage our son. To show him creating a game is a lot different than buying one.

We do have mobile devices in every aspect of our lives these days, so we make it a point to have time both with and without a computer in front of us. Whenever we get the chance to be outside playing and getting exercise is important. Just as showing a child how things actually work and how to create a game or computer program from scratch is also important. The whole idea is to show them apps are not just about the instant gratification of downloading from the app store.