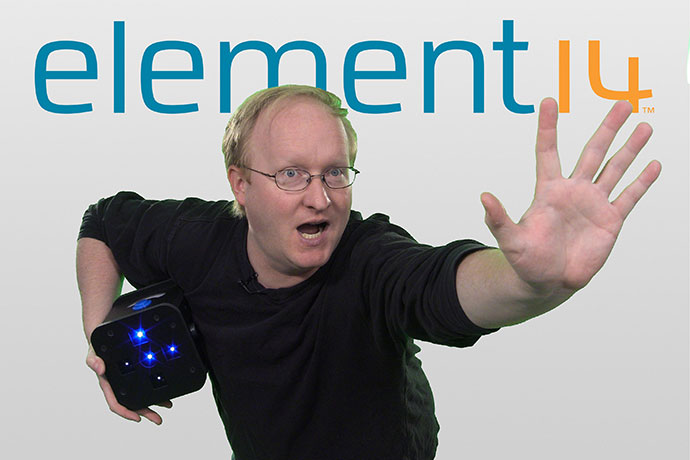 For example, buried way down at the bottom of his website where no one ever goes is the standard boring Powered By statement he’s modified to say, “The Official Site of Benjamin J Heckendorn is powered by WordPress, electricity, phpBB, beef stew, Diet Pepsi and MGD.” It’s clever bits plus an attention to detail that make his shows fun and inspiring to fellow makers who want to build stuff in their garage. I also like his take on one of my favorite recent movies, Pacific Rim, a fun update on Godzilla movies, “Pacific Rim was fairly entertaining, but they may have found more box office success had they simply called it Robots Punching Monsters.” Precisely!

Today Ben talks about how he became a maker, his Element14 show, tools to get started, how people can find help with projects, and where he found his magnificent Dogs Playing Poker mural seen on several of his shows.

Tim: How did you become a maker and how long did it take? Where did you start?

Ben: I've been making things like this for 13 years now, since 2000. For me, it started as a side project — like a hobby. I just started hacking video game consoles for fun, and a lot of people were interested in it. So I just continued to do it because, thanks to the Internet, there was a lot of encouragement. People could see my work and provide direct feedback. It wasn't the Maker Movement as we know now, but people could find my work and see it.

In terms of mistakes, sometimes I was too aggressive. I would do a project a certain way and when I did the project again or did a new version of it I would be a little too aggressive and do too much. I didn't know what I was doing well enough. What I've learned since then is to take things one step at a time and not go too far. Don't change five things, because if it doesn't work you won't know what went wrong. I learned to take my time and take it slow. It's also advice I often give people — to take things one step at a time.

What is the typical response you get from people when they first create something based on a video or presentation you make?

Ben: I get a lot of feedback on Twitter. People will say, "Oh, I'm building this because I was inspired by a project on element14's The Ben Heck Show," and that's always cool. It's not necessarily about having people replicate what I do but inspiring them to take the leap and try their own thing. What's even more gratifying is on many occasions someone will contact me and say, "Hey, I decided to become an engineer because I was inspired by your work." And that's really cool to see young people explore that as a career path. Because it's an important one that we need more of in this world.

What are your favorite resources to create things? Where did you learn what you needed to know?

Ben: When I first started doing this, YouTube didn't even exist. The Internet was there, but it was different. I had been soldering since I was 10. I would get those electronic kits to make circuits. I had been exposed to that pretty early and for me it was a lot of trial and error. There were times when I would be ripping apart things not realizing you could solder them or that there was a tool for it. Nowadays when I'm looking for information online, YouTube is always a good resource. And of course we have the element14 Community, where people can ask how to make something and get an answer from members who have already come across that problem.

That's what's great about community and forums in general. People can help each other. Especially young people today — they have so many different resources and opportunities. I'm sure we'll be seeing a lot of cool things once these kids become adults and work for larger companies as engineers or hackers.

Ben: As far as electronics tools, I like to recommend people start with a soldering iron and de-soldering iron, which is inexpensive and will get used a lot. Also, don't be afraid to use a hot glue gun. I get asked a lot what my favorite tool is and I always say my tweezers. Strangely enough, they're my most important tool. Things that can help you build accurately at a small level. If you're someone who is getting into making or modding, realize that there are existing things like hobby and craft tools or model airplanes. Find existing resources for modding your own stuff, especially when you're on a budget. Think outside of the box.

Some of your shows (and other maker shows) require knowledge not included in the show, for example, different types of resistors. What's the best way for people to get up to speed and fill in the blanks of their knowledge?

Ben: Well, after watching an episode of our show you could go on to the element14 Community and say, "what did Ben mean when he said this?" or "What does this mean?" People can respond with answers, and I also go online and respond on our website.

I would love to go into more detail for each build, but the show is usually 15-20 minutes an episode. Something we've started doing in the current season (season four) to help people fill in the blanks is a "Tech Time Out." We pick one thing from the episode and I briefly describe it. For example, I'll say, "in this episode we talked about Piezos. Here is how they can be used to make sound, or used to detect deformations." We try to give more details in when we can. There's things even I come across and I wonder how it works. The Internet is a great tool to dig up the information you need.

In your experience, what is the connection between learning STEM (and STEAM, which includes the arts) and most workaday jobs? What sort of things do people get by learning how to build stuff? Is having fun and blowing stuff up enough? Or is there more value?

Ben: STEM or STEAM are tangible skills that are contributing to the creation of goods and services in the world. From what I've seen STEM is becoming the basis for public education. With higher education you obviously build on those skills even more, but having that knowledge from an early age and learning those skills earlier in the education cycle (middle school or high school) gives kids a leg up. We didn't learn any of this when I was in school. The most technical course we had was shop class, but I was interested in computers at a young age, programming-wise.

If kids can learn things more at a low-level stuff, how things are built and how the real world operates, that will give them a leg up in life. Once you understand how things are made, everything clicks. One thing that's so cool about the Maker Movement is you see parents taking their kids to these trade shows and fairs. When kids see a robot whiz by it engages them in a visceral way: "Oh that's so cool! I get it now. How does that work?" That engages their interest. Even for adults, it's fun to see a tangible result. That's something we've tried to do on our show as well. There might be a project that relies a lot on computer programming and we don't show that part of the process. Visually it's not as interesting. So when we make something we try to focus on the tangible results. People want to see things that beep or move, or feed treats to a dog.

There is definitely more value in learning how to build stuff that just having fun. In general it helps you understand how the world works. As far as making is concerned, let's say you're a person at home wondering why your computer is overheating or wheezing. When you learn how things work, it explains why things happen in the real world. To use an analogy, it's along the lines of a car enthusiast, who takes their vehicle in to the mechanic because it's stalling. You can tell your mechanic, "Hey, I think it's the carburetor, check there." Detecting what might be wrong helps solve the problem faster. It speeds up the process to fix it. For anyone, to understand how electronics work, that knowledge can be applied to real world uses and jobs. It's a long answer, but STEM is really important to me!

In one of your videos, I noticed a magnificent wall mural of Dogs Playing Poker. What’s up with the mural? Where did you find it and is it exiled to your workshop or in your home?

Ben: I bought it off of eBay, and I think it was $40. I love it because I think it's so tacky! And it's fabric so you can fold it up and move it. We used to have it in the background of older episodes of the show, but Alyson (my assistant) rearranged the workshop one day when I was out of town and moved the mural. It's cool of you to ask — I appreciate this question, Tim!