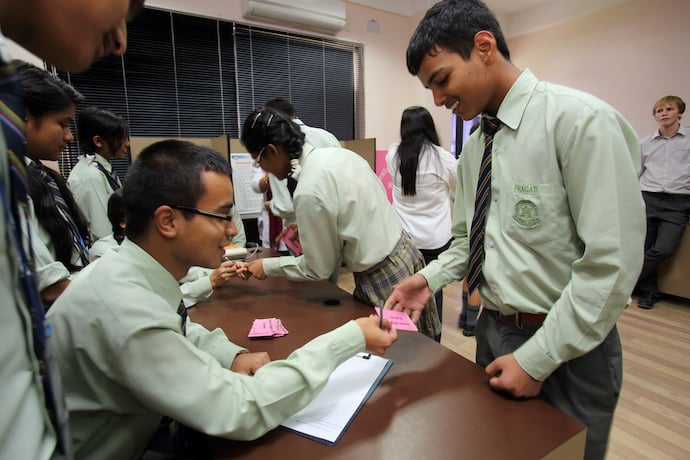 Imagine your class of 30 students has earned a lunch party. Your teacher says the class can choose one of the following meals: pizza, hamburgers, or sandwiches. The class votes and the final count is recorded in the chart below:

By examining this chart we see that pizza received twelve first place votes, while hamburger and sandwich only received ten and eight respectively. Since more people’s first choice is pizza than any of the other choices, your class gets a pizza party, right?

If it seems to you that there might be a problem with hosting a pizza party based on the votes in the example above, you are onto something. This is because although pizza has the most first place votes, 12, it also has the most last place votes, 18. To make sure we get the most overall satisfaction at the party, we wouldn’t want to serve a dish that over half of the students put in last place.

As a matter of fact, if we take what is known as a pairwise vote we get a very different result. Compare each choice with just one of the other choices. For example, if the students in this class could choose between only pizza and hamburger, we would see that 12 students would choose pizza but 18 students would choose hamburgers. How about pizza compared to sandwiches? Again, 12 people would rather have pizza and 18 would be happier with a sandwich. And if they could only choose between hamburgers and sandwiches then 20 would choose a sandwich and 10 would choose a hamburger. Even though sandwich received the fewest first choice votes, it actually beats both pizza and hamburger if we compare choices two at a time.

These are examples of two of many systems of voting. The first, in which the choice that receives the most first place votes wins, is called plurality. In the second example we did a pairwise comparison of each choice. This is known as majority rule, and the winner is sometimes referred to as the Condorcet winner, after the French philosopher and mathematician Marquis de Condorcet. Around the time Condorcet proposed his voting method, another French mathematician (and sailor) John Charles de Borda, popularized yet another system, now known as the Borda count. Using the Borda count a voter gives her/his first choice one point, second choice two points, third choice three points and so on. The winner of the election is the candidate with the lowest point count. Can you determine the Borda count winner in our vote between pizza, sandwiches, and hamburgers?

Many people have never considered the voting method used when they are electing political leaders. This is very troubling, as we have just seen that in some cases changing the way we count votes has serious consequences. For example in 1970 in Chile, there was a presidential election between Salvador Allende, Jorge Allesandri, and Radomiro Tomic. Salvadore Allende had just less than 38% of the vote. But similar to pizza in our initial example, Allende won the plurality vote. Also similar to pizza, he was probably also the most disliked candidate. At this time in Chile if no candidate won over 50% of the votes, then congress would vote on the two candidates who received the most votes. After a series of troubling events, Chile’s congress elected Salvador Allende. However, electing a strongly disliked candidate often leads to rebellion. Three years later Allende was overthrown by a coup. The election of Allende provides an extreme example of how voting rules can contribute to major political instability.

In the United States, the method of counting votes in local elections can vary city to city. Check out the voting system in the country, state, or city where you live. You might be surprised at what you find!