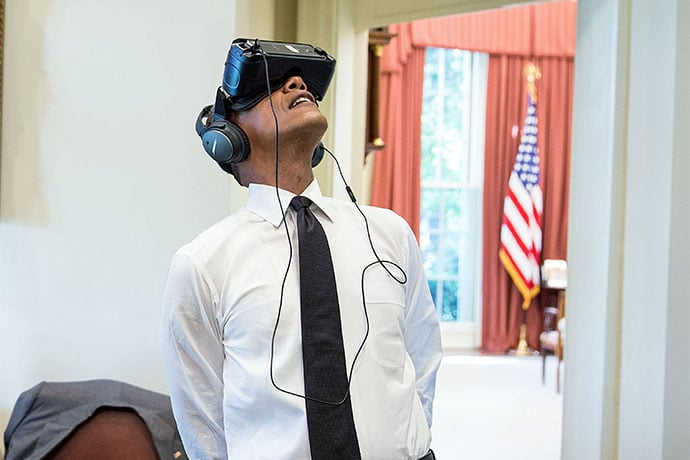 Virtual reality (VR) and augmented reality (AR) bring computers and the digital world to the real world we can see, hear, and touch. (Smell and taste, of course, have yet to be translated into computers!)

Virtual reality uses sight, sound, and our sense of balance to create 100% digital worlds we can move around in. Augmented reality, in contrast, adds a digital layer to our real world experiences, for example, attaching a small screen to glasses or a heads up display in a car that lets the driver view speed and other data as they drive. The Pokemon Go game is augmented reality, letting you chase Pokemon in the real world with your phone.

While augmented reality is often useful — helping us do things more efficiently or learn as we do things, virtual reality gets more attention because it surrounds us with completely different worlds. It’s amazing to stand at the bottom of an ocean and watch whales and jellyfish parade past when, in reality, we’re in our living room or classroom. We can breathe in the digital water without scuba tanks. Reach up to touch a jellyfish and it swims away.

It’s so real, except it’s not.

Virtual reality technology goes back at least to flight simulators from the 1950s. Pilots used simulators to learn how to fly and perfect their flying skills without the risk of crashing planes or the bother of waiting for a storm to appear so they could fly through it. 3D movies are another effort to make movies immersive. And anyone who has watched the TV show Star Trek: The Next Generation knows today’s virtual reality is simply a small personal holodeck.

While the term virtual reality was coined by Jaron Lanier in 1987, virtual reality will become more common in the classroom and at home this year and next with the release of at least four kits plus many games and apps.

The Oculus Rift — and in Fall 2016 the Playstation VR — use headsets connected to a computer. The Samsung VR lets you slide your modern Samsung phone into their headset. The very low cost Google Cardboard project is a cardboard headset that works with any phone and apps like the New York Times VR app.

The HTC Vive uses a headset connected to a computer with two base stations set up to track your movements. Here’s how the Vive is set up:

Virtual reality kits vary only in quality of the experience, their ability to trick your eyes and ears into believing the digital world around you is the real world. For headsets connected to computers, virtual reality also requires the latest video cards and processors to stream data to the headset without interruption.

Today virtual reality headsets can be heavy when attached to your head or held in your hands. However, the first TV sets were huge boxes with small screens that evolved into modern mostly flat screens. Virtual reality equipment likely will follow the same path. There’s already a virtual reality setup that fits in a backpack, for example. And people are trying to fit the current headset down to the size of a pair of glasses.

If you choose one of the high end virtual reality kit, be aware of exclusive software, DRM (digital rights management), and other things that will limit your ability to try out software. For example, software built solely for one virtual reality platform means other platforms can’t use it. And open platforms can use software from anywhere as long as it conforms to basic standards.

For programmers and people interested in the software, the Unity game engine and other software development kits (SDK) include the ability to create immersive virtual reality experiences and games. You add libraries of code to your project the same as other libraries.

Whether or not you should get involved with virtual reality today is a matter of cost, time, and what software applications are available.

There are a number of useful educational apps, for example, to explore the planets and stars. At least one app lets you explore Yosemite National Park. For people who want to play, of course, there are many games converted to virtual reality. The Star Trek: Bridge game due out Fall 2016 that lets you and friends operate the Starship Enterprise together on adventures. And many 2D video games will release VR versions.

The lowest cost way to try out virtual reality, though, is Google Cardboard. For $20-30 USD you buy then fold together a cardboard headset then slide in a modern smartphone and use VR apps. While not as immersive as the HTC Vive, the experience is as amazing as more expensive options.

What is Virtual Reality?