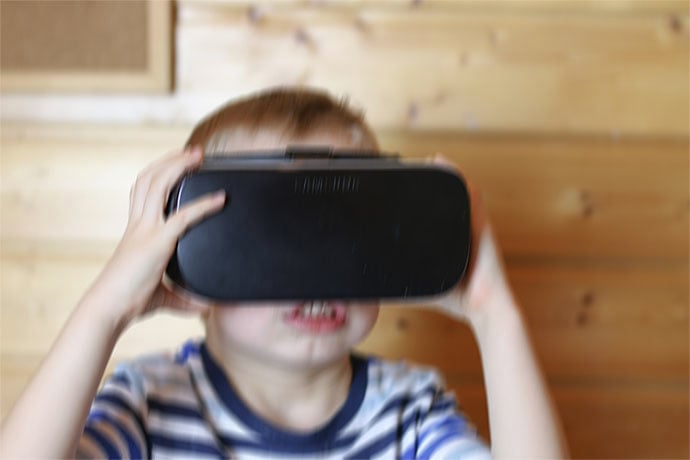 Imagine you have not eaten in a few days and you walk into a massive room with tables covered with food. Where do you begin to eat? Do you start with dessert? A sandwich? Now imagine the room is narrow and food has been arranged with appetizers in front and desserts at the end of the room. It’s much easier to navigate the narrow room and make decisions about what to eat.

Virtual reality has a similar problem: where do you focus your attention? Without a clear point of visual reference, your eyes, ears, and brain can get overwhelmed and confused. The results might be anything from dizzyness to nausea and apathy.

Visual overload with no clear point of reference is a problem that happens to some people when they use simulation software, for example, flight simulators in the 1950s. Virtual reality brings this physical problem to the masses. The problem is not only dizzyness. It’s also tiring for your eyes, ears, and brain to sort out these details for an extended period of time.

Oddly enough, one solution is literally in front of our faces. Focus your eyes on a spot about three inches in front of your face: what do you see? Your nose.

Turns out that seeing your nose in a virtual reality game gives your eyes and brain a point of reference to sort out the rest of what you see and experience. For some people, seeing a nose in a virtual reality game reduces or eliminates any dizzyness. While there are other ways to reduce VR sickness, human evolution apparently has developed our noses partly to help solve this point of reference problem in the real world.

Short answer: no one really knows.

There are a number of potential causes for VR sickness. One has to do with the refresh rate of images displayed in your goggles. The human brain processes images quickly. If a VR simulation refresh rate is too slow, the difference between what the brain sees and expects to see can cause you to be disoriented. This refresh rate problem is one reason virtual reality requires so much computer power. Images need to be updated extremely fast to trick our brains into believing what we see is as real as the real world.

Another cause is a disconnect when our eyes see one reality, for example, the world tilted to the right, when our ears tell us our head is tilted to the left. The human ear maintains our balance by telling our brains what direction our head is in, or whether or not our body is in motion. Virtual reality can confuse our ears and throw off our balance.

However, this conflict between our sense doesn’t explain every instance of VR motion sickness. In some cases, what we experience in virtual reality is so unusual it throws off our ability to adapt and cope with what we see.

How Often Does VR Sickness Happen?

Some people never have problems with virtual reality. Others adapt over time. And some VR applications are more likely to cause problems than others. A cooking application where you make food in a kitchen is less likely to disorient you than the space game Adr1ft which has you float above the earth in zero gravity.

A heavy VR headset also can tire you more quickly and possibly increase your odds of getting VR sickness. Limiting your time in virtual worlds also helps. Spending five hours in a game is very different than working with VR for an hour and taking a break.

There are a number of ways to reduce or eliminate the risk of not feeling great when using virtual reality. Here are a few suggested by the Oculus Rift team:

And, of course, if a VR game or application makes you feel physically ill several times, don’t play it again.

As with any technology, VR sickness can be managed if it happens. It doesn’t happen to many people and, when it does, there are solutions to reduce or eliminate the negative effects.

Why Does Some Virtual Reality Make People Sick?

How to Reduce VR Sickness? Just Add a Virtual Nose

Why Does Virtual Reality Make You Want to Puke?