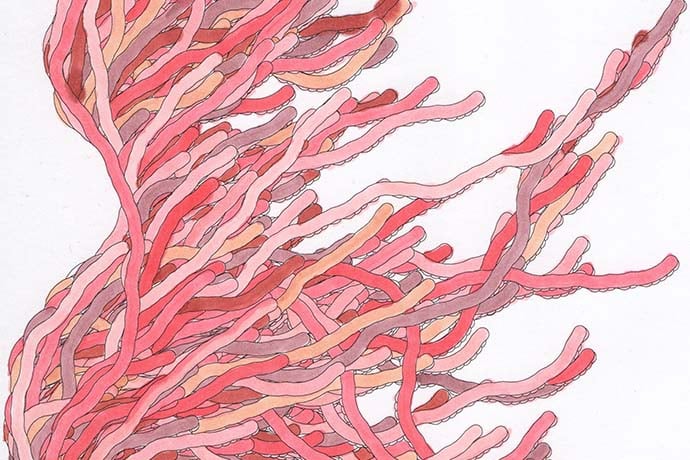 Math and coloring books might seem like an odd pairing. However, the progression of numbers often creates beautiful shapes which, in turn, you can color in.

Visions of Numberland is a recent book by Alec Bellos and Edmund Harriss and published by Bloomsbury. In addition to amazing shapes created by numbers and equations, the book explains how the shapes formed from the math. It’s a fun introduction to often deep mathematical ideas. Their images are inspired by math problems from topology, four-dimensional geometry, statistics, computer science, group theory, and many other disciplines.

But the book is far from boring. And you don’t need an advanced degree to understand the shapes you color or how numbers created the shapes.

This image, for example, visually demonstrates the Collatz Conjecture. Take any number. If it’s an even number, divide it in half to get a result. If it is an odd number, triple it then add one and then divide the result in half. Repeat this process with your result until you get to 1. The Collatz Conjecture says no matter the number you start with, it will always reduce to 1. The reasons this happens might require an advanced degree. But the mystery of what makes any number reduce to 1 is an unsolved mystery.

The image on the right shows a series of number results as they reduce to 2 which then reduces to 1, the single point at the bottom left of the image. The authors created a simple rule to determine the shape and direction of numbers: starting at 2, if the next number up is even the branch bends clockwise while an odd number bends counter-clockwise. Then they removed the numbers from their drawing.

The image shows all numbers below 10000. It’s beautiful in many ways. It looks like seaweed, for one. For another, it’s a great example how a simple math problem can be turned into an interesting visual image.

No matter how big a number you set for the num value, it will always reduce to 1. This code also prints all the numbers.

The book is available at most bookstores. In the United States, the book title is called Visions of the Universe. The online version of this article has links to learn more about the book.