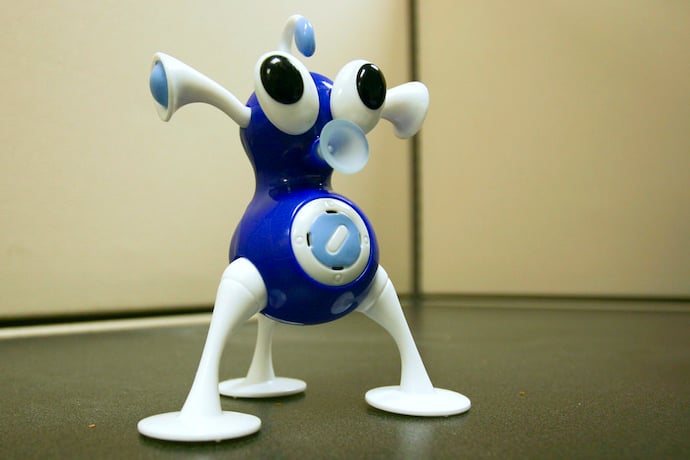 After teaching middle school robotics for a few years, this year my curriculum has taken a 180-degree turn. While my units were a good introduction to modern robotics, I began to notice that something wasn’t exactly working. Mirroring the fast pace of technology, my lessons were designed to focus on programming, precision, and competition. I would begin classes by showing videos of Boston Dynamics robots running through the woods or sleek designs from Carnegie Mellon University. My students huddled into teams would compete in real world challenges – winners and losers crowned in every class. However, after getting introduced to the work of Simone Giertz, a roboticist and inventor from Sweden, I have decided to abandon this model in my 7th-grade classes. I believe there is a case to be made for imperfect or useless robots.

Once confined to the labs of collegiate computer science programs, the past twenty years has seen robotics expand to secondary and primary classrooms. With the birth of classroom-friendly platforms such as Vex, LEGO Mindstorms, and Sphero, robotics has become a real and valuable part of technology education. Students in modern robotics get acquainted with everything from collecting sensor data to advanced techniques like line-following.

However, the question of what my students were taking away cognitively always lingered on my mind. How much were they really learning about problem-solving and robotics engineering? Would they be capable of building a robot to complete a given task? I realized the answers to these questions ultimately were not a lot and no. The Spheros we used were largely pre-built affairs and the LEGO Mindstorm robots were more geared towards programming and precision at least at a middle school level.

About a year ago, I became acquainted with Simone Giertz’s YouTube channel where she builds robots of questionable functionality. Her robots are the opposite of what I would show to my students. Whimsical and made from found materials, they could pass for Jetsons-era visions of a glorious and automated future. Her goofy and campy inventions clearly defy the image of modern robotics as intricate and austere. In her captivating TED talk, she demos one of her first robots, a toothbrush helmet consisting of servos mounted to a powder blue motorcycle helmet. Some of her other designs are an alarm clock robot that uses rotating rubber hands to slap herself awake and a machine that slaps popcorn into her mouth a small rubber hand.

In her TED talks, she speaks about her struggles with learning robotics hardware. Working with real-world robot components like servos, motors, sensors, and gears has a high rate of failure. Aiming to build imperfect machines reduces the feelings of stress stemming from this failure and to use Ms. Giertz’s own words promotes “an expression of joy and humility that gets lost in engineering.” Moreover, her designs, however imperfect, follow the engineering design process from start to finish. This is what I wanted my students to learn: how to solve a real and immediate problem using the sometimes frustrating components of robot hardware.

To accomplish this task, I invested in a few Hummingbird robotics kits and a bin of assorted detritus from our local creative reuse store. The robotics kits contain a control board and a collection of robotics components like LEDs, motors, and sensors. Compared to the LEGO Mindstorm, these components feel more primitive which is exactly what I was looking for. During classes, my students have been more focused on making decent wire connections, how voltage affects gears, and how to program threshold values.

The reality of working with these components is that they tend to fail quite often. My students have had sensors mysteriously stop working and wires break. It does not always go smoothly, but in many ways that is the point. Dealing with failure and finding workarounds is an important cognitive skill that will be invaluable for them in the real world. As they are strapping components to ball caps and Barbie cars, they have to keep returning to the constant cycle of ideation, testing, and revision. And on some days there is more frustration in the room than success. However, if everything goes according to plan, by the end of our unit students will get to create something truly from scratch and reconnect with the joy of engineering along the way.

SIMONE GIERTZ’S LATEST INVENTION: A ROBOT THAT SPILLS SOUP ALL OVER HER

Tim McGuigan teaches middle school Computer Science and Robotics and is the Farrell Chair for Innovation at Shady Side Academy.