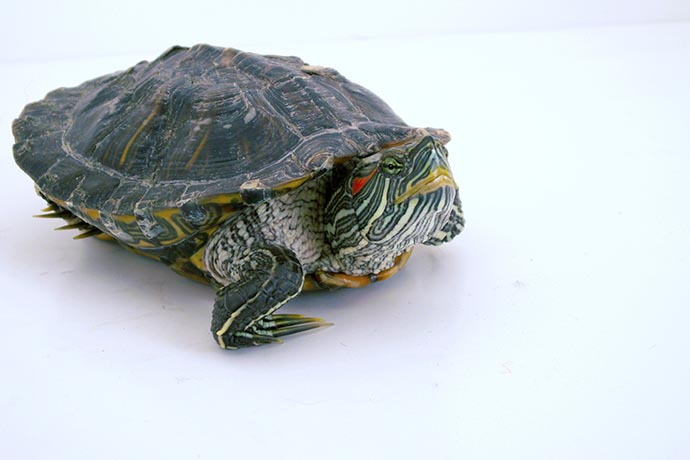 If you’ve ever drawn a star before — or even doodled one in your notebook — you probably realized that it’s harder than it looks. My stars always look titled and squishy. Inevitably, one of the star’s points is way too long, and another point looks like a sad little stump. Well, luckily for us technical folk, there’s an easier way to draw perfect stars: using Python and Turtle.

Python is a simple, flexible programming language that allows you to focus on logic instead of worrying about brackets and semi-colons. Turtle is a Python module — sort of like an extension to the main language — that makes it easy to draw things.

There are two main components in a Turtle program. There’s the ‘screen’, or the canvas on which you draw. Then there’s the turtle, who wanders around the screen with an imaginary pen, drawing the shapes we request. Of course, this is virtual turtle! Often he (or she) is shaped liked a little triangle, but we can change this if we like.

Open up your favourite web browser and navigate to www.repl.it then type ‘Python’ in the box, but make sure you select ‘Python (with Turtle)’. Otherwise, the code won’t work!

Paste the following code in the left-hand editor:

Hit the Run button! Your ‘turtle’ should draw a star on the right-hand screen. Try the embedded script here, by clicking the Run button, or scroll down to visit the repl.it site with this code.

Since Turtle is a module, it’s not automatically included in our program. This line of code fetches the module from its ‘shelf’ and brings it into the work area.

The second part of this line — Turtle() — is creating a turtle object. An object is simply a virtual data structure with special traits and abilities; in this case, the ability to move, draw, and change shape. Altogether, this line of code creates a specific turtle and assigns him to the variable ‘thomas’. You can imagine this as the virtual equivalent of going to a pet store, buying a turtle, and naming him Thomas.

By default, Thomas draws with a black pen. This code changes the colour to red, but you could choose blue, green, pink, orange. Just change the word ‘red’ to the colour of your choice — and make sure to keep the quotation marks, or you’ll get an error!

This line of code creates a ‘for loop.’ They’re very useful in programs that have lots of repeated steps. Instead of telling the program to ‘draw one side of the star, then the second side, then the third side, etc.’ (which is long and boring to write) you can use a for loop to say ‘draw a side, then do it five times.’ ’range(5)’ controls how often the code inside the loop is repeated — in this case, 5 times. By that logic, what will happen if you change the ‘5’ to a ‘4’? Or increase it to ’10’? Try it out!

Simple: we’re telling our turtle, Thomas, to move forward ’50’ pixels. You can put any number larger than 0 between those two brackets. The bigger the number, the bigger the star that Thomas will draw. Make sure you start this line with a tab!

In preparation for drawing the next side of the star, Thomas has to turn a bit (otherwise he’ll only move in a straight line). In this case, we tell Thomas to turn to the right by 144 degrees. A full circle is 360 degrees and a half circle is 180 degrees. Therefore, 144 degrees is not quite a half circle; you almost turn to face the opposite direction, but you stop before you’re all the way there. What do you think happens if you turned more than 360 degrees?

‘144’ is the magic number for creating a perfect star; otherwise, Thomas will turn too much or too little, and miss the point where the lines should meet. This isn’t necessarily a bad thing. You can create lots of neat spiral art by changing the angle, they just won’t be stars. I recommend trying out 100 and 165 degrees. You might also want to increase the number of repetitions, i.e. changing ‘range(5)’ to something like ‘range(20)’.

To finish off the activity, we’re going to draw something extra cool: the spiral star. There are two small changes we must make to the code:

Now hit the ‘Run’ button and see what happens!

Activities with Python and Turtle:

A Simple Turtle Tutorial for Python