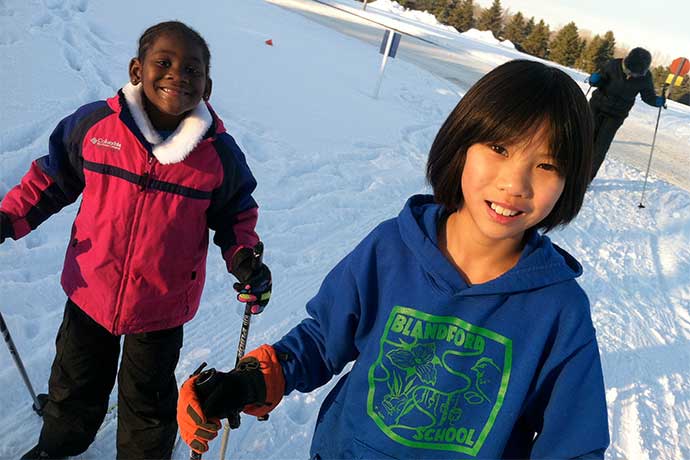 It's not as fun a contest as sailboats versus power boats. Both snowshoes and cross country skis get you outdoors away from civilization. But they require very different skills. For the indoors type, or the lazy, or both, there's also a list of lists for 2012 from DailyTekk.com to exercise your mind.

It is winter in the northern latitudes and time to at least think about getting outdoors, for the exercise if not to clear your head. You could snowmobile but that's cheating. And probably expensive to rent, never mind the cost of gasoline or the futility of trying to listen for wildlife over the roaring engine.

Which got me thinking: which is better for you, snowshoes or skiing with cross country skis? This column is about what happens when internet research skills are used to look up fun stuff that has nothing to do with WordPress. Here's what I found.

First, unless you need time alone, bring friends. All the photos I found with groups of people on snowshoes seemed to have a blast. And they got into some stunning remote places with their feet and snowshoes the size of Sasquatch's feet.

Let's run through a few questions:

Which is better, cross country skis or snowshoes? There's even a YouTube video to answer this question. Indeed, there are a frightening amount of videos of people walking in snowshoes.

Key takeaways from this video include:

Much more fun is Extreme Snowshoe-ing, which is what you think it is. The Snowshoe Bluntside rather reminded me of my days pole vaulting and falling down on the cross bar, a leg on either side. You learn to put your hands around your knees to prevent damage, after not paying attention the first time. The Snowshoe Tree Grind is fun, too, although I pity the trees.

Can you even extreme cross country ski? Score Snowshoes 2, Cross Country Skiing 0. Although I wonder if the UK has snow since this video is shot in Germany with a bunch of Brits. Perhaps snowshoeing and cross country skiing in the UK is a moot point? When I Googled, “where to snow shoe in the UK,” I only got sites for Snowshoe cat clubs. Seriously.

How do you learn to snow shoe? Cross country ski? This one was easy to find. Even better, the videos are both from L.L. Bean, a long time US outdoor gear company. So half the video tells you all the gear you need to bring, which L.L. Bean helpfully sells.

First, how to snow shoe takes one minute:

Next, cross country skiing, which takes a full three minutes to teach:

Don't forget, "Nose over your toes!" And the method for getting up after falling on cross country skis is hysterical. Both sports turn out to use ski poles. Cross country skiing uses poles for balance and speed. With snow shoes, poles are used to fight off rabid wolverines and badgers, should you meet any.

Both videos make me realize my dream job probably is Product Manager for an outdoor gear company. That would be sweet, get paid to be outdoors hawking gear.

Where are some great places to do both? Pretty much any place with snow works for both sports, although you want gentle grades up and down for cross country skiing. Steeper slopes are easier for snow shoes. If you don't have a park nearby, there are exotic places to visit like Banff, Mount Washington Valley in New Hampshire, Mount Hood in Oregon, Mount Timpanogos in Utah, any beautiful out of the way place with snow works.

But here's the real reason snow shoes likely trump cross country skis: racing. We all know about Nordic racing in the Olympics. They even race with rifles. But did you know people race in snow shoes? It's must be like soccer where your body has to be in extreme physical shape.

If being outdoors is not fun for you, or you can't get out, but you do want to waste time for a couple hours and forget your life, DailyTekk.com published a really great list of stuff to explore. You're guaranteed to be lost online within minutes, for at least 15-20 minutes total wasted time. Here's the link:

Which is better, snow shoes or cross country skis?
http://www.youtube.com/embed/0zDK6INAmas

Learn How to Snow Shoe

Learn How to Cross Country Ski