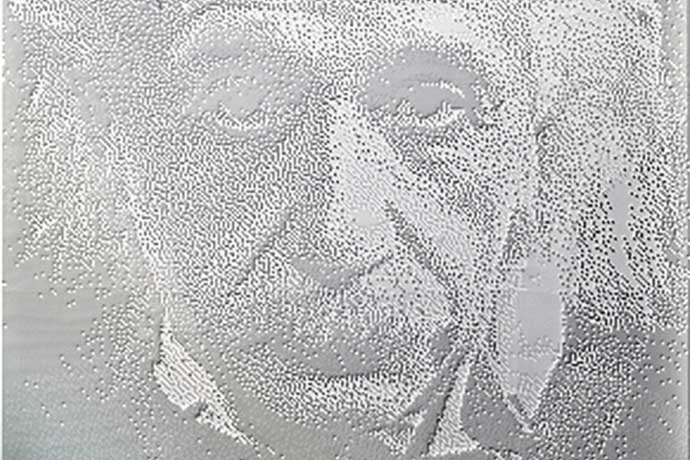 Art, software engineering, design, architecture, and cryptography all come togther in the amazing projects that the Zurich-based team of Drzach & Suchy create.

Drzach is a Swiss and American-educated architect who designs furniture and portable display spaces. Suchy, also educated in Switzerland and in America, is a cryptographer and software engineer.

Their unique partnership is responsible for many projects that beautifully blur the line between science and art.

One of their projects is called Schattenbilder, which means Shadow Pictures. Many of their exhibitions explore light and its effect on form, as this one does. In 2011 they prepared three installations based on shadow casting and the images they create. This exhibit was installed at the Swiss Science Center Technorama.

One of the three, called “Tik-Tak” (that’s German for tick-tock, the sound of a clock), shows the pendulum of a clock moving. Depending on its position, light hits the textured surface of the pendulum differently, thereby causing you to see either the word tik, tak, or something in between!

If you look at “Conversation,” below, you will see either a portrait of Albert Einstein or Marilyn Monroe, depending on the direction from which the light is shown. For more on this remarkable duo, look on the back cover of this issue for a link to their work.

Visit their website to see videos of how they created these objects, as well as other projects.