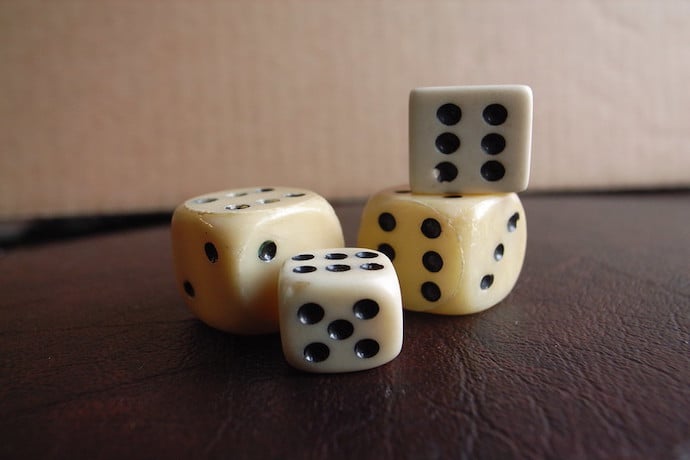 At some point in school you may have played a writing “game” in English class called Roll a Story. If you’ve never played it, it goes like this: a student takes two dice and rolls to have a short story genre and story elements (characters, setting and plot) selected. The student then writes an often outlandish and creative narrative story based on the selections “made” by the dice.

In this case, we are going to create a Python program that allows users to get randomly selected genres (either Mystery or Horror) and story elements to create their own mysterious or spooky story.

First, we need a place to host our program. Programmers can use the free site Repl.it to develop and host their programs and webpages right from their browser. Repl.it works on most operating systems and devices (even a cell phone!). Repl.it provides access to over 50 languages including the most popular ones such as JavaScript, Python (with Turtle), and HTML/CSS/JS.

Programs in Repl.it are called “repls”. You can create as many repls as you want and they can be shared with others. Other users can view and run programs as well as “fork” your program. Forking makes a copy that they can edit (without editing yours). You can even collaborate on a program with others in real-time.

Your repls will have an editor (where you type your code) and a console (where you see the output). You can type your code in one file or in multiple files. Repl.it auto-saves your work so you never lose your code! You can even see and restore your code history. All of these features are free!

Let’s start by creating a new account in Repl.it (or sign into your current one). Once you are signed in, paste the URL of my repl, “Roll a Story” program (linked below in “See More”). Hit enter and type your own name after the first hashtag in the file (you’ll see my name – #Bianca Rivera – replace it with your name). This will fork a copy and provide you a copy of the “Roll a Story” program. You can click on the pencil icon to rename the program and provide a description if you’d like.

Your screen will display the IDE (Integrated Development Environment) where you will see the program file, editor and console side by side. Your first file will be named main,py by default (the main.py file name doesn’t change). This particular Python program randomly rolls “dice” to pick story elements (character, setting and plot) from the Mystery or Horror genre.

If you look at the repl code, there’s a lot going on but we will break it apart. Keep in mind there is plenty in this program you can edit to “make it your own” but some of this must stay as-is in order for the program to work.

Here’s the code. There’s a description below so be sure to scroll down. Or have your repl in one web browser window and this article in another as you read the description of how the code works.

If you are not a fan of mysteries or horror, what could you do to easily edit the program to give players the chance to roll Science Fiction or Fantasy characters, settings and plots? What part of the code would you have to edit?

So, what if we want to add to the “Roll a Story” program and make it more complex? What could we do to improve this code? There is another extremely important concept in programming that would make this code more concise and you could easily add additional story elements to make the game more robust. That concept is called OOP – Object Oriented Programming, a type of programming paradigm. The program we created was an example of a Functional programming paradigm.

In functional programming, the code is split into functions. In effect, the function of the program is more important than the data. Very often, our goals as programmers should be to develop concise code divided into classes and objects that can be reused and easily managed. For example, had we used classes and objects in this program, it would allow us to skip on all of the nested if statements (which can become quickly confusing and easy to make mistakes). Although a little more difficult to create, the program would be easier to manage in the long run. OOP can also be used in other popular languages such as JavaScript, Java and C# and should be the next step in your programming journey.

Roll the dice with Python

Bianca is a school librarian at East Islip School District where she leads a Technology Club for grades 3-5 students.